June 15, 2017 - When Bluenose Academy, a Grade P-9 school in Lunenburg, N.S., was built seven years ago it was the greenest building in Atlantic Canada and achieved LEED Gold certification. One major factor that helped the three-storey building obtain its LEED Gold status was the decision to install a Viessmann Pyrot 540kW wood pellet-fuelled biomass hot water boiler as the school’s primary source of heat for fuelling the school’s hydronic heating system. Fast-forward to present day and that boiler is still offering golden returns to the school and its 500-plus students. 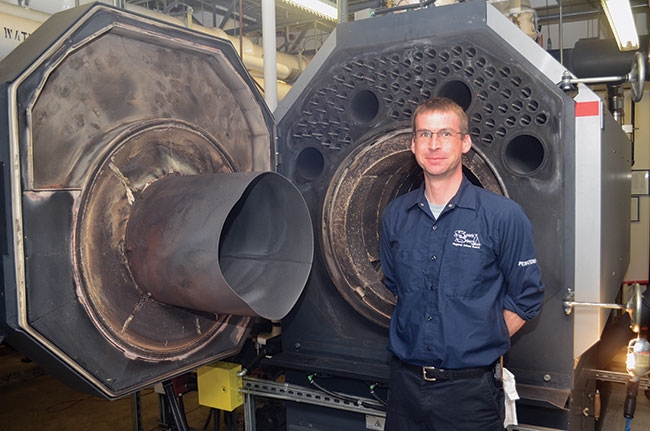 “It’s been reliable. This thing has run well,” says Adam George, mechanic responsible for the maintenance of the school’s biomass heating system, in addition to other biomass hot water boilers installed at schools across the South Shore Regional School Board.

Unlike many commercial and residential heating projects in Atlantic Canada where biomass systems are retrofitted into older buildings – often to displace heating oil – Bluenose Academy’s biomass hot water boiler system was put in place during the design-build phase of the school. “It allows for the optimum set up for the site outside and the boiler inside,” George says.

The wood pellets for the system are stored in a 25-ton silo and are supplied by local pellet producer Shaw Resources. The pellets are fed into the hot water boiler by augers that run automatically once the system is activated. After pellets are burned they are transferred via another auger into an ash can.

After heating the hot water boilers, the water is sent to a 1500USgal buffer tank where it is stored until needed. When additional heat is required the water is pumped out of the tank via pumps and is distributed through Uponor radiant heating loops, air handlers and entry heaters.

“The whole first level of the school has in-floor heating,” says Ken Harrington, sales manager for Thomas Industrial Sales for Nova Scotia and Newfoundland, adding that the upper floors have radiant ceilings. “Even the air is heated by hydronics . . . and with the buffer tank there is never a shortage of hot water.”

A Viessmann Vitorond 200 oil/gas-fired hot water heating boiler was also installed during the design-build phase of the school to ensure the system had the necessary backup heating requirements in place.

The entire system is controlled by a Viessmann master control that communicates via a local operating network (LON) control module.

The biomass system burns about 3/4 of a ton of wood pellets per day, which costs the school about half of what it typically costs to heat a facility of its size with heating oil, Harrington says.

Although it took a little while for George to get accustomed to working on wood pellet-fuelled boiler systems – he was originally trained to work on oil-fired units – he says the system has been consistently running as smoothly as the day it was installed. George has not had to install any parts on the biomass boiler outside of routine maintenance.

“I’ve just bought a spare igniter and an O2 sensor, but I haven’t had to install them,” he says. “Nothing on the boiler has failed to date. It’s very good.”

WHW Architects was the principal architect that designed the Bluenose Academy design-build LEED Gold project. Dumac Energy Ltd. was the mechanical contractor that installed the mechanical systems and Bird Construction was lead contractor for the construction of the facility.

Mechanically the system was designed, installed and commissioned with little issue. This was the first modern biomass system in Nova Scotia in years. Many sets of eyes were following the project, with trepidation. If the province was going to do more biomass systems everyone knew the system had to be flawless.