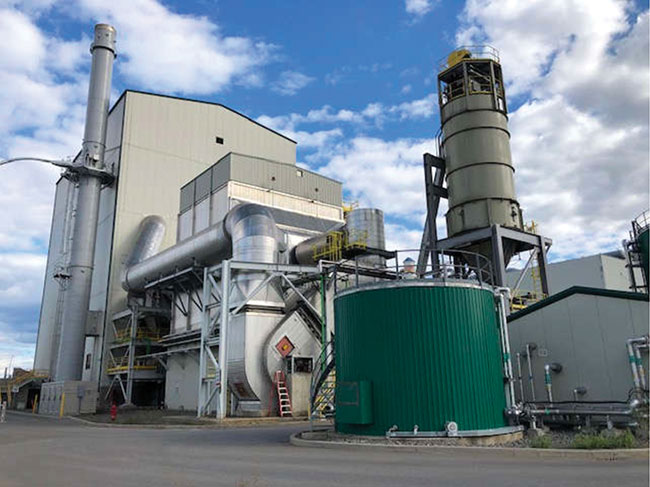 In June 2021, the Fort St. James Green Energy Project, a biomass power generation facility in Fort St. James, B.C., ceased operations. But, the residents of Fort St. James did not have to go long without sustainable, green electricity from the plant. On Jan. 6, 2021, the plant began running again under new ownership, BioNorth Energy Limited Partnership.

Arrow was already involved in the biomass industry, supplying hog fuel from a grinder and from local sawmills to the Domtar pulp mill in Kamloops, B.C.

“When this plant became available, we already had trucks up in the area and we obviously knew how to run a grinder, so we thought it was a good fit to be able to buy the plant,” Kilba says. “That’s when we started to look for some partners, and we partnered up with the Nak’azdli and Nexus, who has a lot of experience with building and maintaining these plants.”

The power plant is capable of producing 40 megawatts of energy and still had 26 years left on an electricity purchasing agreement with BC Hydro, Kilba says. This made it a no-brainer for Arrow and its partners to acquire the facility in early December 2021.

The previous owners had “significant challenges with the plant,” Kilba says. “They ended up cutting their losses and selling off their assets. We are quite optimistic that it’s going to be a good business plan for us.”

A good fit
Acquiring the facility was also a good fit for Arrow because of their experience grinding and trucking wood fibre and biomass logs.

The plant will consume about 250,000 cubic metres of fibre annually, which will come from two streams: wood waste from nearby sawmills and bush grind. Arrow will grind and haul the fibre to the plant. For the grinding part of their operations, Arrow uses a Peterson 5710 grinder, fed by a 2019 Tigercat 875 loader. Five to six trucks then take the bush grind into town.

Despite severe wildfires this past summer and changes to B.C.’s logging policies, Kilba says he is not concerned about the fibre supply to the plant.

“With the current logging that is being done, there is more than enough fibre to feed the plant,” he says. “There’s still piles that will get burned that we won’t need. But, we are going to significantly grind and utilize a lot of the fibre that was once burned.”

However, grinding wood waste in the forest and hauling it to town is not always economically feasible, especially as some biomass logs require a further level of breakdown, Kilba says. As a result, Arrow has applied for funding from the Forest Enhancement Society of BC (FESBC) to help bring in some fibre from longer distances.

The funding has “definitely been helpful,” Kilba says. “Logs is a great form for us to have a sense of security, because in hog form, it gets broken down by microbes, so you always have a risk of it decomposing or even catching fire if not managed properly. So, in log form, it’s a much better safety net of hog that we can grind on-site, regardless of weather conditions or truck availability.”

Coming online
Once the hog fuel gets to the BioNorth Energy plant, it is stockpiled in a centralized woodyard.

“Our optimum inventories are a month-and-a-half worth of consumption. So, around 15,000 to 20,000 oven-dried tons of fibre is stored,” Antonio Madia, Arrow’s director of project development, explains.

Wood fibre is loaded into a “receiving pocket,” and then heads into three large concrete silos for storage purposes. Each of the silos can store up to 1,500 oven-dried tons of fuel.

“From there, we have an ability to reclaim from the silos and feed fuel to the high-pressure boiler,” Madia says.

This boiler is an FSE boiler approximately 10 storeys tall, 50-feet-wide by 50-feet-across, and equipped with a Detroit Stoker combustion grate. The furnace is lined with pressure tubes that store and circulate water and high-pressure steam. As the water gets heated, it becomes steam, which is regulated through a governor into the steam turbine generator.

“Once it goes into the steam turbine, it’s essentially vapour. It’s a pressure of 1,500 psi, and it’s now referred to as unsaturated superheated steam,” Madia says. “As the steam enters the turbine, the thermal energy is converted into kinetic energy and, ultimately, electrical energy by the Siemens generator.”

The turbine rotates at approximately 5,000 rpm, and the resulting energy is channeled into the BC Hydro electrical grid. The turbine, generator and gear box are part of a 40-megawatt Siemens package.

The equipment was installed by the previous owners, and, for the most part, was in good working
condition when Arrow, the Nak’azdli Whut’en and Nexus
acquired the plant, Madia says. But, they made a few upgrades before restarting the plant.

“One of the major upgrades that we’ve done thus far is improving the processed water quality into the plant,” Madia explains. “We were able to locate an aquifer that’s providing very clean water into the process. The legacy water was latent with high mineralization and high iron content, so it had very high connectivity, which created its own set of challenges. The water has to be essentially free of any mineralization and contaminants prior to entering the boiler, ancillary equipment and turbine. Poor water quality will result in fouling of pressure parts and scaling of critical components. This will lead to high maintenance costs and poor plant availability.”

They also replaced eight high-pressure valves that were leaky and had been bypassing, leading to higher than expected effluent discharge levels.

Overall, bringing the facility back online was a fairly quick process, taking just over a month from the time the companies acquired it in early December.

However, the cold weather conditions in the area in the first week of January this year posed a few challenges, Madia admits.

“It was -34 C for several days in the first week of January. We struggled with cold weather-related issues. Starting up a biomass plant that relies on processed water is challenging at the best of times, let alone at -34,” he says. “But, I think the crews did a really good job of completing their capital upgrades and ultimately starting the plant up.”

The plant is now operating at 75 per cent capacity, and the companies plan to do some more upgrades in June which will help them reach full capacity. For example, they plan on installing a tipper to help offload trucks more efficiently, Madia says. They will also improve the overall process control infrastructure of the facility.

“We are thrilled to have hired a seasoned professional, Rock Doyer, to lead and mentor the BioNorth operations and maintenance teams,” Madia adds. “We are extremely blessed to have Rock as part of our squad!”

Tremendous impact
The impact of bringing the plant back online has already been felt in the community, adding 35 direct jobs in the facility and another 60 to 70 indirect jobs through suppliers or fibre providers in the area, Madia says. It also helps local sawmills have an end-use for their waste products.

BioNorth Energy is also the single largest tax base for the municipality, bringing a big economic boost to Fort St. James.

Additionally, for the Nak’azdli, the BioNorth Energy plant is “one of the largest investments they’ve made as a Nation,” Madia says. “This is one of the most significant private sector investments in the forest products sector where a First Nations band owns a significant interest [40 per cent] in the venture.

“So, we’re quite proud of that, and proud to be working with the Nak’azdli. It’s very impactful for their community to have a significant manufacturing investment within close proximity to their community.” •