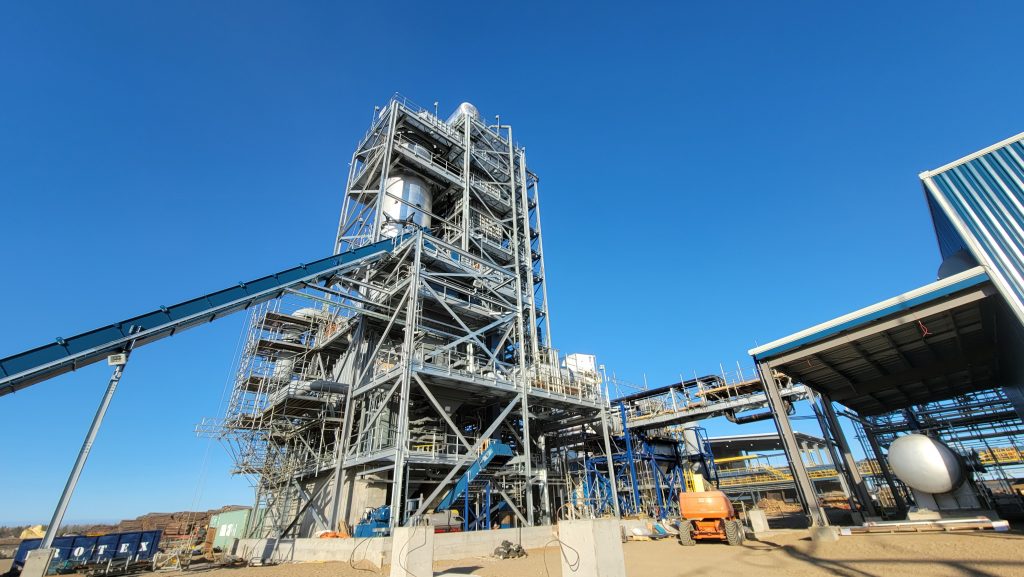 The MLTC Bioenergy Centre will turn wood waste from the NorSask Forest Products mill into electricity for 5,000 homes in Saskatchewan and heat and power for a new continuous kiln. Photos courtesy Meadow Lake Tribal Council.

A first-of-its-kind project is about to come online in Meadow Lake, Sask. The Meadow Lake Tribal Council (MLTC)’s new Bioenergy Centre, which will be operational by the end of February, will turn wood waste from the nearby NorSask Forest Products sawmill into electricity, powering around 5,000 homes in Saskatchewan and providing heat and power for a new continuous kiln.

The project will not only reduce the MLTC’s greenhouse gas emissions, it will also provide economic benefits to local Indigenous communities and companies, explains Tina Rasmussen, corporate development and administration officer with MLTC Industrial Investments.

The process for getting the new bioenergy plant online has been a long one. Construction on the project began in April 2020. Before that could happen, though, the MLTC (which is made up of nine First Nations) had to negotiate a power purchase agreement with SaskPower and secure federal grant funding to ensure that the project was financially viable.

“Power purchase agreements at this particular point in time in Saskatchewan are not very lucrative. SaskPower can buy power or produce power from sources other than renewables that are a lot less expensive,” Rasmussen says. “So, it was strong commitment to the development of this first-in-Saskatchewan project that allowed us to even end up with a power purchase agreement. In addition, the project never would have been financially feasible if the Tribal Council had not received grant funding to support the construction.” 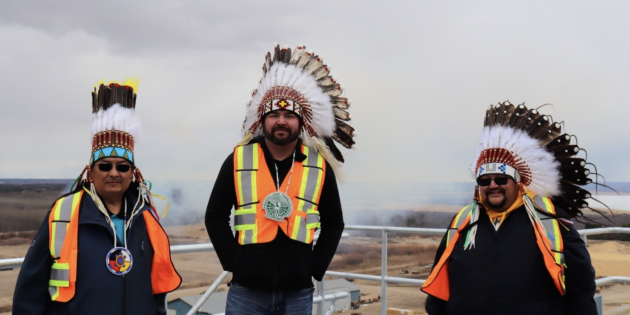 However, the potential benefits of the new Bioenergy Centre made it worth it for the MLTC to tackle this project. The council had three main goals: to use the wood waste from NorSask Forest Products, provide green electricity to the community, and provide economic benefits to the local Indigenous communities, Rasmussen explains.

The Tribal Council has operated the NorSask mill for over 30 years. The mill produces 56,000 tonnes of wood waste per year from the sawmilling process, including trim-end, sawdust and bark, all of which was going into a beehive burner.

“One of the really big things with First Nations people is the forest industry’s view of trees as renewable resources,” Rasmussen says. “First Nations people look at trees as a necessity to our lives, existing on our traditional area and supporting many things more than an economy. They support hunting, fishing, trapping, etc. So, it’s a really hard thing for First Nations people to look at harvesting a tree and not getting 100 per cent use of it.”

The MTLC also wanted to provide more opportunities to the local First Nations people to participate in and to gain revenue. The new facility will create approximately twelve full-time permanent positions, in addition to supporting a large number of other jobs indirectly, Rasmussen says.

The revenue from selling the electricity produced by the facility will also give financial support to the MLTC’s communities in whatever way they see fit – for example, supporting housing, health care, and education.

“Up here in our ancestral territories, 70 per cent of the people that are employed in the forest industry – harvesters, log haulers, people working in sawmills, in the forest management office – are Indigenous,” Rasmussen says. “So, being able to have that kind of equity ownership in the industry has created a huge opportunity to move Indigenous people forward.

“If you’re looking at economic reconciliation from an Indigenous perspective, that truly is an opportunity,” she continues. “And this bioenergy facility is just an extension; it’s a completion of the circle, in addition to taking a resource that we have already harvested and turning it into an opportunity.”

Many Indigenous-owned companies were contracted for the construction of the Bioenergy Centre, which had just entered commissioning stages at the time of writing in January 2021. The MLTC chose to self-manage the project – a new undertaking for them – so they could ensure Indigenous-owned companies could take advantage of the construction contracts and job opportunities, Rasmussen says.

“We’re talking about $80-82 million here. The Tribal Council had never done a project on that scale before. We started by hiring an Indigenous partnership project management company,” she explains. “They handled the construction RFP [request for proposal] process and oversaw the project, working directly with us as the owners.

By the end of the construction and commissioning process, the MLTC expects at least $35 million in construction contracts will have been given to Indigenous companies. This means that not only are the MLTC communities the project owners, but companies owned by those Nations benefit as well.

All told, the MLTC maintained between 33 and 40 per cent Indigenous employment on this project. 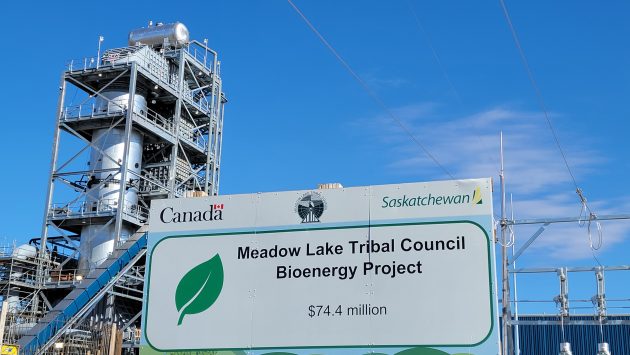 The MLTC faced a few hurdles in the actual construction of the plant, as construction began soon after the COVID-19 pandemic first hit.

“We’ve managed to weather COVID. And we continue to manage through COVID because, of course, we all know things are getting pretty tense in all of our provinces,” Rasmussen says.

Supply chain issues, a side effect of the pandemic, also posed difficulties for the MLTC.

“We had issues related to the costs and delivery of steel, electronics and issues around shipping because of COVID-19’s impact on suppliers in their own locations and their own factories,” Rasmussen explains.

To deal with these issues, the MLTC had to be agile, moving the timeline for the construction and installation of different pieces of equipment. The silo, for example, will only be installed at the end of January as a result of supply chain issues. This also led to a delay in installing all of the conveyors at the plant, as the silos first needed to be in place, Rasmussen says.

The MLTC is currently commissioning the equipment, with the plant set to begin producing power by the end of February. 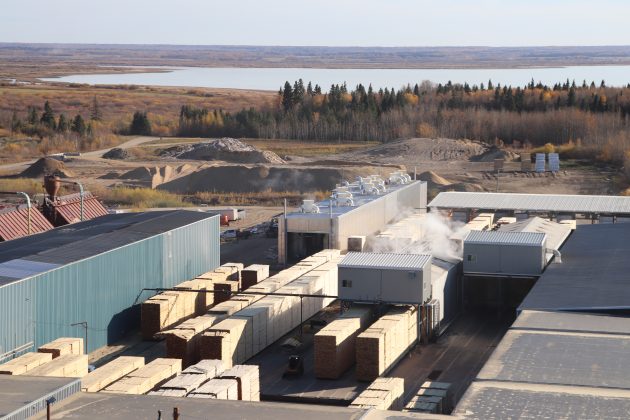 Excess power from the bioenergy Centre goes back into the facility and some of it is used to heat glycol, which is piped to NorSask’s new Muhlbock six-zone Progressive Flo 1306 PRO continuous kiln.

The silo can store up to three days’ worth of fuel, since NorSask does not run on the weekends, but the Bioenergy Centre will run 24/7.

From the silo, the material goes through an auger system and is carried by conveyor to the top of the thermal oil plant, which is a 120-foot-tall building with a reciprocating grate furnace from Classen Apparatebau Wiesloch (CAW) at the bottom. The fibre drops down on top of the furnace, where it is slowly burned. The fire slowly heats tubes in the plant that are filled with thermal oil, similar to radiator heating, Rasmussen says.

“That cyclopentane, when it gets to a certain temperature, turns gaseous. When it becomes gaseous, then it turns the turbine, which turns the generator that produces the energy,” Rasmussen explains.

The Bioenergy Centre can produce up to 8.3 megawatts of power, 6.6 of which goes into the SaskPower grid to provide electricity to 5,000 homes. The remaining power goes back into the facility and some of it is used to heat glycol, which is piped to NorSask’s new Muhlbock six-zone Progressive Flo 1306 PRO continuous kiln. Using glycol instead of natural gas to heat the kiln reduces NorSask’s costs and its natural gas usage by 50-60 per cent, Rasmussen says.

With the Bioenergy Centre now almost fully operational, Rasmussen reflects on the entire process leading up to this point, and whether it might be feasible for other sawmills to construct similar bioenergy plants.

“It’s a very expensive process,” she says. “As new mills are being constructed or are being upgraded, there is an opportunity for this, but probably more as their own source of heat and energy.”

For projects like this, the local utilities need to be on board, and some utilities may need to make upgrades to accommodate different sources of power, Rasmussen says. In fact, SaskPower had to upgrade their system to accommodate the 6.6 megawatts produced by the Bioenergy Centre.

“The thing is, in Saskatchewan, we’re under one Crown corporation. So, they’re the only company we can sell power to,” she explains. “We’re not like Alberta where they have distributed power system where you can sell your excess power to your next door neighbour if you want to.

“There’s very little financial support for these types of projects, and I think the only reason we got financial support for it is because we’re 100 per cent Indigenous-owned,” she adds. “If you look at the majority of these types of bioenergy facilities across Canada, most of them are built to supply heat and energy to their own facility, not to resell, because it becomes quite expensive.”

Consequently, to get additional bioenergy projects off the ground, Rasmussen believes more government support is required. Saskatchewan, as a major agricultural producer, has a lot of potential for similar projects, but because natural gas is so readily available and cheap in Canada, it’s not often seen as an option.

However, with the federal government’s carbon tax, it’s possible that there will be more bioenergy projects taking off as coal and natural gas become more expensive, she says.

Regardless, the Bioenergy Centre will have a big impact on the Meadow Lake area, providing both environmental and economic benefits.

“We see this as the start,” Rasmussen says. “Saskatchewan and Canada are in a very big way moving into the renewable energy field. As an Indigenous company, we really see this as an opportunity to figure out how to do this and how to participate in the provincial and national economy by producing energy that’s non-fossil fuel, not harmful to the environment.”