March 23, 2016 - Woody biomass will be generating a lot of juice in the interior of British Columbia by the end of 2016. 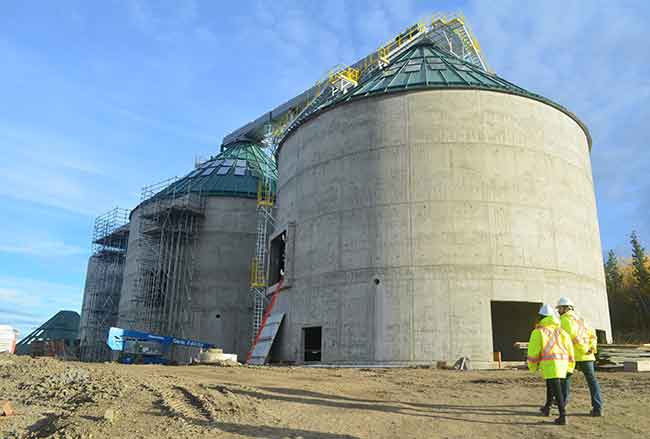 The turnkey construction of the two power plants was contracted out to Spanish energy firm Iberdrola at a cost of $330 million. Woody biomass will be generating a lot of juice in the interior of British Columbia by the end of 2016.

Both power plants will be fuelled by a combination of sawdust and other residuals collected from local sawmills, harvested dead wood and cleanup operations. Once commissioned, the power plants will have the capacity to supply electricity to upwards of 160,000 homes in the province, as well as reduce CO2 emissions for the province by 570,000 tonnes annually.

The two power plants are owned by Fengate Capital and Veolia with the turnkey construction contracted out to Spanish energy firm Iberdrola for $330 million for both power plants.

Enrique Reyes Molano, site manager for Iberdrola, says the decision to create the massive power plants was mainly to help plan and promote future growth in the Fort St. James and Merritt areas. He says the B.C. government is interested in using the electricity mainly to have the ability to grow its local economies, which are mainly fuelled by the forest sector in Merritt and the forestry and mining industries in Fort St. James.

The construction of the facilities has been a major boost to the local economies in Merritt and Fort St. James, supplying approximately 250 construction jobs to the towns, as well as 22 new direct jobs for the operation and maintenance of the plants.

Another major benefit of having the power plant up and running in Fort St. James is that it will create a home for much of the dead pine that is still sitting in local forests due to the mountain pine beetle epidemic that ravaged many of the forests in northern B.C.

“We’ve had increased harvesting of the forests but we’re going to see that drop off real soon,” says Emily Colombo, economic development officer for the Fort St. James District. “Because the dead wood standing in the forest loses merchantability year after year, it’s only good for harvesting and processing for a number of years. Even though there’s lots of dead wood in the forests, it’s no longer going to be desirable by the sawmill companies. So it’s great to have the Fort St. James green energy project starting up because it gives us a purpose for our waste wood. Until now it’s been burned in the bush… it’s just releasing carbon dioxide into the atmosphere.”

The construction of the Fort St. James plant is expected to be complete by November 2016 with the Merritt power plant coming online this December.

Feeding systems
In Fort St. James, the boilers are fed woody biomass via three 6,560 m3 silos that can hold upwards of a 6.75-day supply for the plant. The fuel is supplied through the residuals from the local Confiex and Apollo Forest Products sawmills, as well as through local contractors harvesting local dead wood.

The fuel is received, weighed and off-loaded in a dedicated area. It is then screened and stored in the three concrete silos, which required 4,440 m3 of concrete and 570,000 kg of reinforced steel in their construction. All of the silos are equipped with a steel roof, are 11.6 metres in height and have a silo diameter of 25 metres.

In Merritt, the boilers are fed woody biomass via a large conveyor connected directly to Tolko’s sawmill located next to the power plant.

Each power plant will consume approximately 24 dry tonnes per hour of biomass with a total annual consumption of about 200,000 dry tonnes.

Boilers and turbines
Both locations feature a state-of-the-art grate, natural circulation biomass boiler supplied by FSE Energy. The flue gases heat the wall tubes of the combustion chambers and the water is partly evaporated. Water and steam rise through tubes back to the steam drum where the steam is separated from the water.

After leaving the steam drum, the saturated steam is transferred to the superheaters then is transferred into a Siemens SST-400, 40MW-condensing steam turbine.

Each Siemens generator is rated at 1,800 rpm and produces electricity at  13.8 kV with each turbine rated at 5,143 rpm, producing upwards of 41.39MW of electricity that will be fed in BC Hydro’s grid.

The turnkey construction of the two power plants was contracted out to Spanish energy firm Iberdrola at a cost of $330 million.

Overcoming challenges
Montserrat Varas Roncero, project manager for Iberdrola’s Fort St. James and Merritt Biomasses Generation Division, says one of the toughest issues when starting work in a new country is learning all the ins and outs, including the logistical challenges of the project sites, as well as the various provincial, municipal and federal regulations and governmental processes.

Educating the local workforces on Iberdrola’s processes was another barrier to overcome.

“At the beginning, no one in Canada knew Iberdrola,” says Molano. “Now in British Columbia, in this industry, most of the construction companies know Iberdrola, how we work, and they are learning a lot about us.”

Working with the safety associations and government organizations created similar challenges for Iberdrola.

“At the very beginning it was hard to work with them – we spent a lot of time explaining to them who Iberdrola is, how we work, the kinds of contractors we use to develop these kinds of plants – but now we feel very comfortable with them,” Molano says. “The relationship is really good. They are working with us as a team very closely and this is giving us an opportunity to solve all the problems and issues in a very efficient manner.”

Despite all the hurdles and barriers Iberdrola has had to overcome, the two biomass-fuelled power plants should be commissioned on schedule in Fort St. James and Merritt, providing a foundation for the province to continue to grow the towns’ local economies and provide much-needed employment for both areas of the B.C. Interior.

Particulate matter at the boiler stacks is reduced through the installation of a high-efficiency electrostatic precipitator.

The bottom and fly ashes that will be left over from the process are stored and sold for use in other applications, such as the making of concrete (fly ash) or for spreading on local farmlands (bottom ash).

The installation of air-cooling condensers (ACCs)at both facilities allow for the facilities to keep their water requirements to a minimum. Each facility is expected to have a water consumption level less than 90 litres per minute.