May 25, 2017 – Japan is a good news story for Canada’s wood pellet producers. As recently as 2014, Canada exported just 62,000 tonnes to Japan, but by 2016, this had increased by a whopping 350 per cent to 272,000 tonnes. Canada presently accounts for 78 per cent of Japanese wood pellet imports and we aim to maintain this position. As impressive as these figures sound, by 2030, Japan’s wood pellet imports are expected to increase from the current total of 347,000 tonnes to more than seven million tonnes per year! 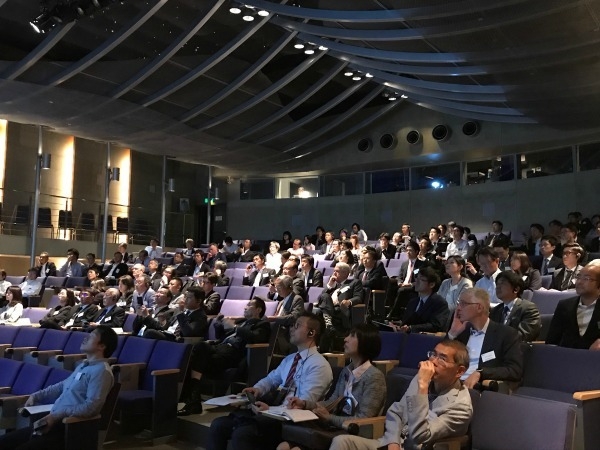 More than 100 Japanese and South Korean customers and prospects attended a Canadian wood pellet seminar hosted by the Wood Pellet Association of Canada and the Embassy of Canada to Japan.

On May 15, the Wood Pellet Association of Canada (WPAC) and the Embassy of Canada to Japan jointly hosted a seminar and reception at our embassy in Tokyo. More than 100 Japanese and South Korean customers and prospects attended. Just a few of the notable companies included GS Global, Hanwha, Kansai Electric Power, Mitsubishi Corporation, Mitsui Corporation, ORIX Corporation, Showa Shell, and Sumitomo Corporation.

Our aim was to inform Japanese and South Korean customers about the quality, reliability, and sustainability of Canadian wood pellets and to cement our reputation as the premier supply source. Trade Commissioner Rowena Ko did an excellent job of acting as master of ceremonies for our seminar which was presented simultaneously in Japanese and English. Minister (commercial) Arun Alexander was Canada’s senior representative and he graciously welcomed our guests. Arun was followed by presentations from Gordon Murray of WPAC, William Strauss of FutureMetrics, Scott Bax of Pinnacle Renewable Energy, Kerry Lige of Fibreco Export, Sylvain Bertrand of Airex Energy, and Brian Mori of Ontario Power Generation. We covered such topics as Canadian wood pellet opportunities; the advantages of wood pellets as a coal replacement for power generation; the reliability of Canada as a supply source; Canadian port logistics; torrefied pellet production; and Ontario Power Generation’s experiences with wood pellets at its power plants in Atikokan and Thunder Bay. (Find those presentations here.)

Following the seminar, we held a reception during which everyone enjoyed good Canadian food, drink, and hospitality. Pinnacle’s senior vice-president, Vaughan Bassett, welcomed our guests to the reception. Mitsubishi’s deputy general manager Michio Asaoka responded with a traditional Japanese kanpai – or toast – to kick off the festivities.

There are several factors driving pellet demand in Japan including the Ministry of Economy, Trade, and Industry’s Best Energy Mix strategy, which calls for a substantial increase in the use of bioenergy by 2030; the Energy Conservation Law, which provides that thermal generators must achieve a minimum of 44 per cent energy efficiency from fossil fuel whereby biomass is exempted; and a feed-in-tariff system that provides between 21 and 24 Japanese yen per KWHe – equivalent to 25 to 28 cents Canadian. South Korean demand is growing as well. The country has an existing renewable portfolio standard that calls for renewable energy to increase from its current level of 4 per cent to 10 per cent by 2024 with biomass co-firing being the cheapest option. South Korea has also recently adopted a system of renewable energy certificates, where tradeable certificates are awarded on the basis of the type of electricity being provided. Under the REC system, suppliers of dedicated biomass power receive a multiplier of 1.5, making dedicated biomass power more profitable than co-firing, hence driving new demand for wood pellets.

WPAC gratefully acknowledges the efforts of trade commissioners Akira Kajita and Rowena Ko, senior trade commissioner Andrea Clement, and the rest of the team at the Canadian Embassy to Japan in Tokyo for their excellent efforts on behalf of our industry. We are also grateful for financial support from British Columbia Forestry Innovation Investment’s Market Initiatives Program (Government of B.C.) and Natural Resources Canada’s Expanding Market Opportunities Program, which enabled us to make this event possible. Since 2012, support from these two programs has helped Canadian global wood pellet exports to grow by nearly 100 per cent, from $208 million in 2012 to $410 million in 2016. And we are expecting further growth in 2017 and the years to come.

Gord Murray is the executive director of the Wood Pellet Association of Canada.

More than 100 Japanese and South Korean customers and prospects attended a Canadian wood pellet seminar hosted by the Wood Pellet Association of Canada and the Embassy of Canada to Japan.