Features Pellets
How to stop a pellet plant explosion

Oct. 11, 2017 – One single ounce of oxygen. That’s all it would have taken for an explosion to have occurred at Pacific BioEnergy’s Prince George, B.C. facility in August 2017. 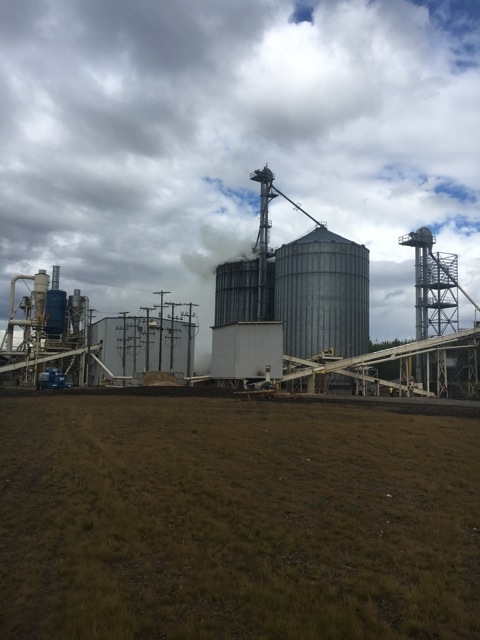 It was Thursday, Aug. 24 when chairman and chief executive officer Don Steele found out that one of the wood pellet fuel company’s silos began smoldering overnight.

Steele was hosting a group of seven guests who had flown from Nagoya, Japan for a tour of the facility.

“I advised them,” he explained. “I said we could go up and have a look. We might even go on the property and they wouldn’t see much. But, at that point in time we were evacuating,” Steele said.

Although reported as a fire in mainstream media, the incident was a smoldering situation.

What was the winning solution? Nitrogen injection.

In an industry where the potential for explosions is all too common, this was the first time that a North American pellet operation successfully put out a smouldering issue.

“We have a number of incidents that have happened in our industry, mostly in Europe, that have not gone successfully,” Swaan said.

“There were some references that I shared with Don and his key people on-site,” Swaan recalled from the day. “And then his VP of operations gathered his key people around and took a look at what the options might be and looked at the references,” he explained. “I shared the report about how best to handle these [situations], that was done in a research centre in Sweden.”

“A simple reaction would be to try and open [the silo] up to put out the fire, which would have been catastrophic,” Steele said. “Any oxygen entering would have been disastrous. It was a tremendously risky proposition.”

The silo holds 3,500 tonnes of pellets. Steele said that’s the energy equivalent of about 10,000 barrels of oil. The incident had the potential to have the entire surrounding city evacuated.

The nitrogen injection equipment was brought to the facility from neighbouring Alberta within eight to 10 hours. Alberta’s oil fields have prompted the province’s first responders to be prepared for fire suppression missions to prevent explosions.

The smouldering material in the silo was injected with nitrogen for a few days until it was safe enough to remove in small amounts. The nitrogen arrives as a liquid and needs to be turned into a vapour.

“I think the first principle of it is, liquid nitrogen is an inert gas,” Steele said. “In other words, it can’t explode or burn. So you use it to push the oxygen out of the container and then try and seal it off. We tried with foam and various things, but once you’ve got the oxygen content below a certain level, [about] 10 per cent, you’ve minimized the risk of an explosion. So then you can start pulling the material out.”

“We basically wetted it down, and over a course of seven days eliminated the risk, moved the material out, quenched the fire risk and then stockpiled it over in another part of our property,” Steele said.

“I think the key thing is nobody overreacted… I don’t even think there was a Band-Aid.”

Swaan and Steele said the cooperation between industry and first responders was what ensured a safe outcome.

Half a million dollars-worth of material and product was destroyed and a lot of equipment was damaged, but Steele says everybody’s safety makes the situation a success.

“It’s a happy beginning actually, because we’re beginning now to refit and add to our knowledge of our product and how to handle it,” he said. “And I think the whole industry is going to learn something from it too.”

“I say anything that can be fixed with money is not a problem. You can’t fix people with money, particularly if they’re severely injured or killed.”

“It’s not a matter of ‘if’ [a silo fire could happen] it’s ‘when,’” Swaan said. “But the good news is that we now as an industry have a lot of new learnings. We have experience that we can now share with the industry so that we can make it a safer industry for these types of situations.”

Steele said, “The key thing is, think before you act, use other information, use your judgement, move deliberately, keep everybody safe.”