Sept. 20, 2017 – Working to improve safety measures in the wood pellet industry is, thankfully, not an uncommon topic these days, but a safe work environment can only be achieved if all members of a team are engaged and committed to adopting that safety culture. Day 2 of the WPAC conference offered attendees some personal insight on the dangers of ignoring safety. 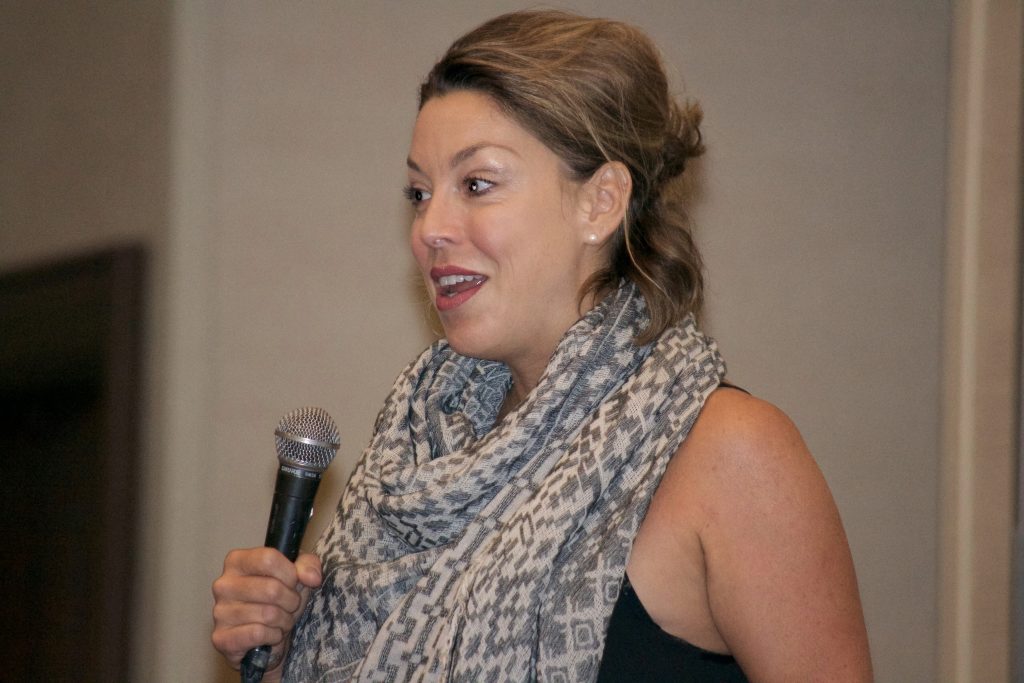 Aug. 11, 1999 was the day that Candace Carnahan’s life changed forever. She left the house for her summer job at a local mill in her hometown in New Brunswick. She was 21 years old. It was her third year working there over the summer before her next university semester began. Her father had prepared her a banana pancake breakfast as he usually did. They said goodbye, and she was off.

She felt comfortable at the mill. Her mother and other family members had worked there for generations. In her own words, she walked around like it was her living room.

Daily, Carnahan would walk along the slow-moving conveyor belt. So did others. She didn’t think anything of it.

“It’s so easy to become complacent when things are going right,” she told the WPAC audience on Wednesday.

That summer day would be the last that Carnahan walked out of her home on her own two feet. That day, as Carnahan walked along the very same conveyor belt she’d grown accustomed to for three years, her foot got caught.

She said no words could describe the level of pain and fear she felt in the moments that followed.

Someone pressed the emergency stop button. A man sprawled himself across Carnahan’s body so she wouldn’t be able to see past her own waist.

“There’s not one thing in the world that can get you ready at age 21 to be wheeled out of a hospital without a leg anymore,” she said.

She bent over and nimbly removed her prosthetic leg to show the audience. She said she lost her own leg just as quickly.

Carnahan said her decision to take an unnecessary risk and do something that she’d been doing for three years simply because everyone else was doing it cost her a leg. “It takes courage to care. Doing the right thing is not always the easiest thing. In fact it’s usually more difficult.”

That’s also what Pinnacle Renewable Energy’s vice-president of operations Scott Bax told the crowd during his safety presentation. “You have to really want change,” he said.

After two fires at Pinnacle’s Burns Lake and Houston plants in B.C., the latter of which resulted in an explosion, a partnership was created with WorkSafeBC to acknowledge the safety issues and tackle them to make the mills cleaner and safer.

Bax described the process behind Pinnacle’s safety improvements saying it was key to pick critical focus areas. He said the company followed the thinking process of “if 20 per cent of our activities led to 80 per cent of our risk, let’s focus on that 20 per cent.”

“Take the time and energy to address the culture you want to see,” he said. “You have a choice in the outcome of that culture. It’s not about making clever decisions or bigger deals, it’s about engaging people.”

“Safety matters,” Bax said. “It matters because we need our people to go home safe.”

“What we’ve done is nothing special. It’s no secret potion. It’s something you can do if you want to make change,” he said.

“Safety is everybody’s business. It’s everybody’s responsibility,” Carnahan said. “I’m alive. This is not the worst thing that could happen to a person. But it sure as heck isn’t the best. And it didn’t have to happen.”