Sept. 19, 2017 - Transitioning away from coal. That was the main theme at Day One of this year’s WPAC conference in the nation’s capital. 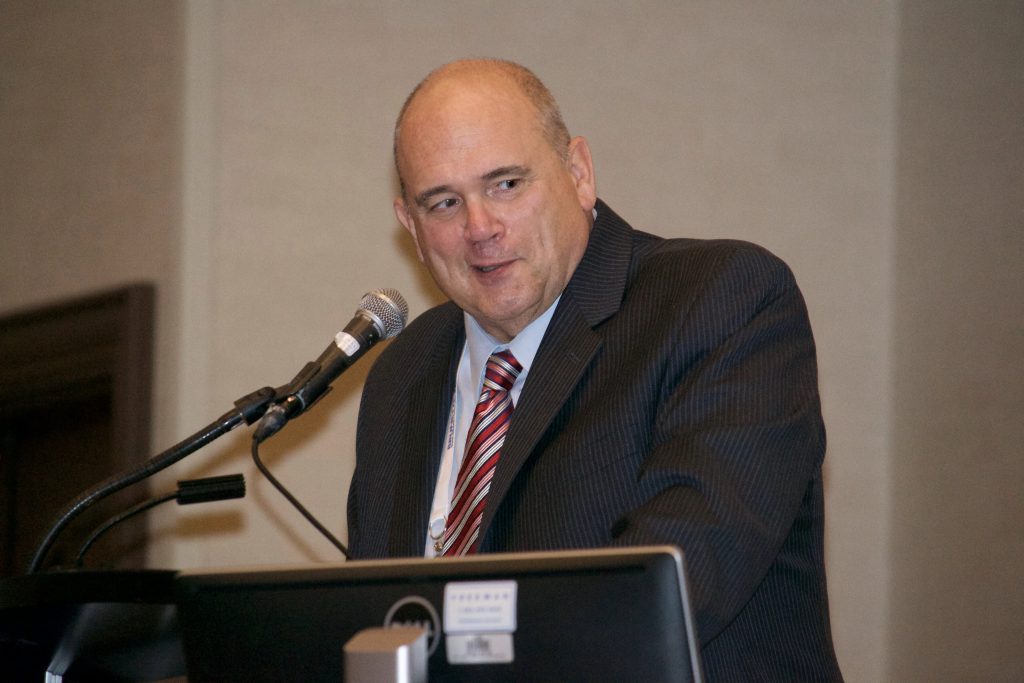 WPAC's Gordon Murray addressing the audience at the WPAC 2017 conference in Ottawa.

Executive director of the Wood Pellet Association of Canada (WPAC) Gordon Murray said the industry received the confirmation it needed this morning regarding the government’s commitment to reducing GHG emissions and making bioenergy more widespread across Canada.

“All of our focus, being here in Ottawa, has been to educate not only the producers, but the regulators, government people, and the power utilities who did show up in good numbers, about the benefits of biomass here in Canada,” Murray said. “We’re not going to have a successful industry unless we can demonstrate to the public and the governments how sustainable [biomass] is.”

Acting director general for Natural Resources Canada Rory Gilsenan said Canada is increasing its coal to biomass conversion to achieve reduced GHG emissions by 2030. “Biomass is [Canada’s] natural advantage,” he told the audience. “Your industry, the wood pellet industry, is part of a transformation of the forest sector.”

That transformation was spearheaded in Canada by Ontario Power Generation (OPG). Referring to its conversions to biomass at its Atikokan and Thunder Bay generating stations, which use white wood pellets and advanced wood pellets respectively, Murray said he hopes other power utilities will soon follow suit. “We’re really encouraged that [companies like] Capital Power have done a lot of work, and we’re optimistic that they’re going to make some positive moves with biomass,” he said.

Capital Power’s Sandy Fleming echoed that sentiment in his presentation, saying “We’re very confident that it’ll be easy to defend this type of fuel [as a primary replacement].”

The afternoon led with an international panel of speakers whose companies have made the jump to biomass. Rick Taylor from Drax Power, Preben Messerschmidt from Ramboll, Yves Ryckmans from Laborelec and Rob Mager from OPG each discussed their respective companies’ conversion journeys from coal to biomass.

“Wood pellets are part of the solution to a greener world,” said WPAC president Rene Landry. “Today, we are only just scratching the surface of our industry’s potential.”

President and founder of FutureMetrics William Strauss said wood pellets are part of Canada’s decarbonisation strategy. “This is not a small industry that clawed its way into existence.” He said leveraging existing carbon plants is a reasonable, logical solution to decarbonisation, adding that no other solution provides the most benefit. Strauss noted that wood pellets emit 90 per cent less CO2 than coal and said, “Canada has all the right ingredients to join other nations who are already using pellet fuel.”

On the global pellet outlook, Hawkins Wright’s Fiona Matthews said total global demand in 2016 came in at 28.6 Mt (million tonnes), with a 26 per cent demand growth in Asia compared to only two per cent in Europe.

Europe’s heating market, however, has rebalanced more quickly than anticipated because of both colder weather and lower oil prices. U.K. imports increased by 7Mt in 2016 and supply and demand are now more balanced on the continent after a difficult couple of years.

Canada was the second largest exporter of wood pellets to Europe in 2016. Canada’s global demand also came in at 3.6 Mt compared to 12.3Mt for the U.S.

In the words of Pinnacle Renewable Energy’s Vaughan Bassett, “Canada can, and we should.”