Feb. 25, 2019 - The past year has seen many changes for Pinnacle Renewable Energy: in February 2018, the company completed an initial public offering; in March, it commissioned its Entwistle, Alta. facility; and in September, it acquired a 70 per cent interest in a pellet plant in Alabama. 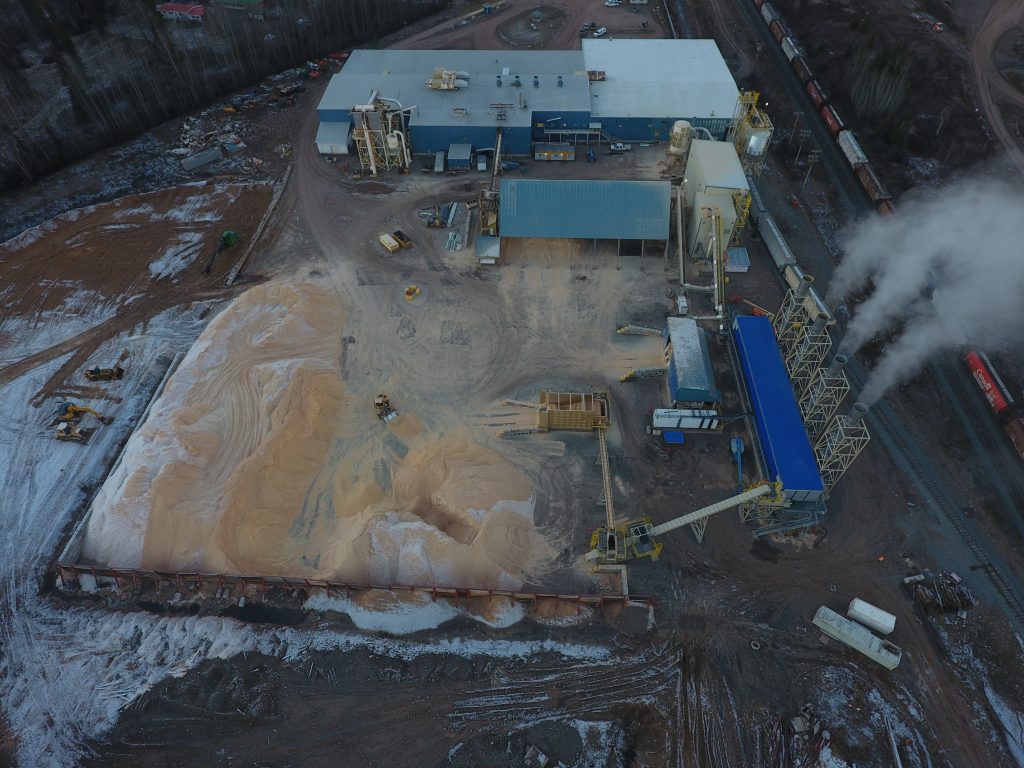 But the company did not stop there. In November 2018, Pinnacle began production at its newest pellet plant in Smithers, B.C.

According to management, safety was top of mind throughout the planning, construction and now operation of Canada’s newest wood pellet facility, which features some of the latest dust suppression, spark detection and explosion prevention systems. In conjunction with Pinnacle’s safety culture and programs, the company is setting a high standard for the industry.

‘A good fit’
With six plants already in B.C. and one in Alberta, why did Pinnacle decide to build a new one in Smithers?

According to Leroy Reitsma, Pinnacle’s president and chief operating officer, the company saw an opportunity to partner with West Fraser and create a mutually beneficial solution.

West Fraser’s Smithers sawmill is located in a region that features a mix of spruce, pine, balsam and some incidental hemlock and cedar. During the mountain pine beetle epidemic, the sawmill was focused on harvesting pine from the areas east of Smithers. However, as this sawmill transitioned back into the areas more to the west of the community, the amount of balsam and pulpwood increased. A local solution was needed to address this, Reitsma says.

West Fraser and Pinnacle have joint ownership of the new plant; West Fraser owns 30 per cent and Pinnacle the remaining 70 per cent. As part of the project, the partnership acquired the site of Northern Engineered Wood Products (Newpro), an independent particle board manufacturer that had ceased operations in Smithers. Particle board markets are wood species sensitive; they prefer pine and spruce, and cannot accept balsam.

Logistically, developing a new plant in Smithers was also a good fit, Reitsma says. The facility is located roughly 350 kilometers away from the Westview Wood Pellet Terminal, the company’s wholly-owned port in Prince Rupert, B.C., which makes transportation of the pellets both cost and carbon footprint efficient.

An efficient design
Likewise, construction of the facility was efficiently executed. It began in March 2018 and finished on time in November.

“The way that we build projects is by contracting more than 80 per cent of the project costs before commencing construction, including major equipment and our installation crews. As a result, on site execution is highly focused on ensuring that the equipment is expedited to the site in a timely manner and that the installation crews are able to safely meet their schedule,” Reitsma explains.

The partnership budgeted $33 million to both acquire the Newpro site and build the new facility. The company has hired 20 full time employees to run the operation.

At full capacity, the new facility will produce 125,000 metric tonnes per year. Currently, it is in the initial phases of production, but Reitsma expects the plant to be operating at full capacity in the latter half of 2019.

The plant runs a mix of fibre – roughly half is traditional sawmill residuals, such as sawdust and shavings, and the rest is harvest residuals – primarily supplied by West Fraser. These residuals go through the standard process to become wood pellets, Reitsma says. “We’ve got drying, particle size breakdown, and then the pelletization process and shipping.

“Given the size of the plant, we’ve been able to come up with a very efficient design for that level of production,” he adds.

The facility was built along the same lines as the rest of Pinnacle’s fleet, using equipment the company is already familiar with, including a Stela dryer, with Bliss hammering capacity and Andritz pelletizers.

Ultimately, the pellets produced at Smithers will be integrated with the supply from Pinnacle’s other mills, to be exported to customers in Europe and Asia through Westview.

Buying into Pinnacle’s safety culture
The construction of this plant was not without its hiccups.

“There’s always challenges in construction – that’s why we have a great team that can overcome those challenges, and I think they’ve done a nice job of not allowing the things that did arise to stand in their way of delivery,” Reitsma says.

Speaking with Canadian Biomass, Penno agrees that there were a few challenges during construction, but says that the project ran smoothly overall. Penno, whose formal title is construction safety advisor at Pinnacle, was in charge of worker safety at the site.

“Every construction worker is coming from a different background,” he explains. “We’re trying to get everyone working safely together, trying to get them to buy into Pinnacle’s safety culture.

“Although I do not have a role in the plant’s operational safety on a day-to-day basis, anytime I am at the plant, I try to look out for the safety of everyone while I am there, construction workers and operational workers alike,” he adds.

Each employee received safety training before starting work, and several policies were implemented to ensure continued safety.One of those policies is “Take Two,” where employees are encouraged to stop and take two minutes to think about their task and how to do it safely, says Penno.

Part of this includes performing field level hazard assessments (FLHAs), whereby workers identify all the hazards and risks associated with a task before starting it, and reassess if something changes during the task. Penno recommends this as a safety best practice.

Other steps include “working safely for yourself, for your family, and your coworkers,” he says.

In the event of an emergency, Pinnacle has several protocols in place, such as confined space rescue and rescues from height.

“If we had to go into confined space, we’d always have a rescue team behind, depending on the space we went into,” Penno explains. “If it’s a space that we could rescue ourselves, we would practice getting the first aid equipment to the work platform, onto the lift and securing it, and then bringing it down to the ground and treating the person on the ground.”

For such rescues, Pinnacle hires outside agencies to provide training.

“No task at Pinnacle is so important or urgent that it can’t be done safely,” he adds.

Owning safety, every step of the way
This focus on safety extends far beyond the construction process. Pinnacle’s safety program, Owning Safety, is also a key part of the company’s safety culture, and has been implemented across all facilities.

“It really starts with our employees, with our Owning Safety program,” Reitsma explains. “It’s a cultural thing that we have made a core part of who we are. When we add people to our workforce, there’s a lot of focus on hiring people who want to live our values. And from there, we back that up with management, training and facilities which are  designed to reflect those values.”

As part of the operations process at each plant, the managers perform a dust audit. “Every plant has a dust management tool, a check that they do every day going through the plant, checking for dust levels,” Penno elaborates. “It’s rated on a scale of one to five, five being clear of dust, four a minimal amount of dust, and if we ever hit two or three, that means you have to stop and get things clean.”

Employees at each plant are also encouraged to record observations, identifying hazards and recognizing other employees’ good safety practices.

All plants have emergency response plans in place, such as spill response and emergency evacuation protocols.

Thanks to the Owning Safety program and these best practices, Penno says “the workers are very in-tuned to the safety culture.”

Owning Safety also applies to the contractors Pinnacle work with.

Technological safety
Of course, a big part of safety at a pellet plant is installing the proper safety equipment, and the Smithers facility features a range of them, such as explosion vents (including flameless ones) on the conveyors.

The flameless vents “pop open if there happens to be a pressure build up because of a deflagration inside of a conveyor,” Penno explains. “They’re engineered to quench the gas stream while directing the flow at such an angle that minimizes the chance of harm. This relieves the pressure in the conveyors so the conveyors don’t explode; just the explosion panel itself would pop.”

The conveyors and bins at the plant also feature CV Technology fire suppressant technology. According to Penno, “They sense a pressure change, and automatically inject a chemical compound into that conveyor that suppresses an explosion or fire before it can materialize.”

In the pneumatic conveyance system a spark detection system from Grecon detects and triggers a suppression of sparks with water.

Temperature sensors in the equipment also help prevent fires and explosions. “When a bearing starts to get hot, it alerts and shuts down the drive before we start having a fire,” Penno explains.

The facility also features cameras, bin level sensors and Sonic Aire dust control technology in the ceiling. The fans oscillate and turn in different directions, blowing air to keep dust from accumulating on high surfaces that workers may have difficulty cleaning.

Keeping the dust from accumulating is “one of our most important acts of owning safety,” says Penno, “as removing dust from our buildings reduces the risk or chance of a combustible dust explosion from occurring.”

What’s next?
In Penno’s experience, Pinnacle has come a long way with these safety practices.

When he joined the company in 2014, WorkSafeBC was concerned about safety at Pinnacle’s plants. But since creating the Owning Safety program, Pinnacle has been working hand-in-hand with WorkSafeBC, Penno says. In fact, he refers to Pinnacle and WorkSafeBC as “partners in safety.”

This focus on safety will only continue in the future as Pinnacle grows, Reitsma adds.

“Alongside of that, we continue to advance new projects that will increase our production capacity in line with the growth of the market that is set to maintain a 17 to 20 per cent year-over-year growth for the next five to 10 years,” he says.