Features Pellets
China is getting serious about biomass power

Aug. 16, 2017 - China is a bit of a mystery to Canadian wood pellet producers. The Canadian wood pellet industry has traditionally relied on the European power market and more recently has penetrated Japan and South Korea. From time to time we have had casual inquiries from potential Chinese buyers, but nothing serious materialized. We believed that with its large population, its reliance on coal, and its insatiable energy demand, China would eventually see the benefits of using wood pellets to lower GHG emissions and reduce pollution. 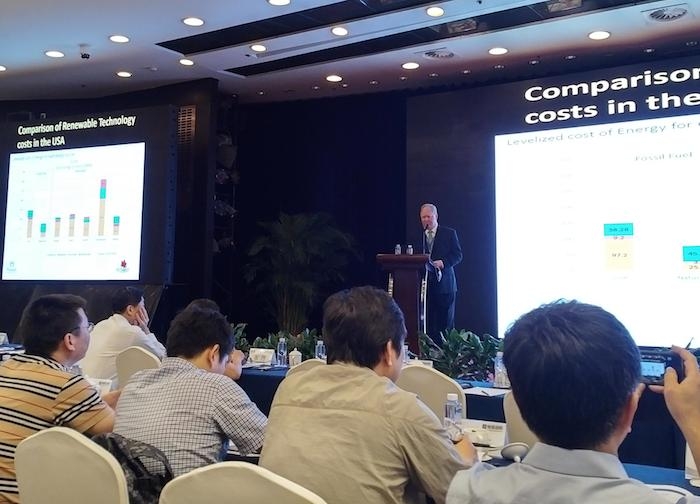 Vaughan Bassett presents at a two-day biomass co-firing workshop in Beijing in June.

On June 7 to 8 I travelled to Beijing to attend a two-day biomass co-firing workshop and to promote Canadian wood pellets.

The workshop was organised by the IEA Clean Coal Center in conjunction with the China Electric Power Planning & Engineering Institute (EPPEI). There were about 320 attendees, representing government, utilities (the Chinese being all state owned), universities, various think tanks, technology providers, consultants and biomass interests.

It was gratifying to see that the Chinese government has taken its pollution issue so seriously. In its 13th 5 Year Plan (2016 to 2020), China intends to achieve an electrical mix that includes 20 per cent “Non-Fossil Fuel” with an overall target of emitting less than 550g CO2 per kWh of electricity produced. The cynical will see that their categorisation as non-fossil, would catch everything including hydro and nuclear, so the 20 per cent target is perhaps not as meaningful as it could be. However, the same 5 Year Plan targets 50 per cent non-fossil fuel by 2050, and whilst this might be a long time in the future, this is a very meaningful number that will require biomass in the mix in a serious way.

The electrical capacity in China is currently 1650GW, of which biomass currently makes up 0.7 per cent (12GW), so lots of room to grow. At a 25 per cent co-firing rate (a high-side number), this could become 275GW for example. Coal is used to fuel about 1,100GW of the national grid. The 5 Year Plan also contemplates running about 100 demonstration plants to kick off the co-firing of biomass. Some of these have already started.

As the discussions and presentations took place, it was clear that wood pellets were the best technical and logistical biomass option. However, the subject is politically sensitive. The issue in China today is that they claim that a significant portion of their particulate pollution comes from farmers burning their stover/stalks after harvesting. Therefore, the Chinese government is trying to kill two birds with one stone by co-firing these agricultural residues to both lift the Chinese non-fossil percentage, whilst simultaneously addressing the farmers’ pollution problem. A beneficial side effect of this strategy is that by providing farmers with another revenue stream (for their biomass), the government hopes to arrest the human migration from rural into urban areas. So the emphasis in China is currently on agricultural biomass. They believe that there are some one billion tons of the stuff available, which theoretically could fuel their entire electricity requirement. So another political objective is for the country to reduce its energy dependence on imports, which is already low in percentage terms.

On the technical front, there was consensus that direct co-firing of these agri residues would create slagging and fouling of the boiler tubes and associated de-rating of the boilers. The root cause of this ash deposition has been identified as high alkali elements (mainly potassium) combining with chlorine in the fly ash. Apparently this can be mitigated by the introduction of sulphur in the boiler. To avoid this issue altogether however, they are looking hard at first gasifying the biomass, then co-firing the gas indirectly.

In addition, there is the issue of logistics. A university study suggested that if every power plant were given a 50-kilometre collection radius around itself, it could secure enough agricultural biomass to co-fire at the required level, albeit seasonally. However, this would require the physical movement of huge amounts of biomass. The cutting and hauling requirement alone is daunting, never mind the storage required at either end.

Wood pellet imports are currently banned (to keep the focus on domestic agricultural residues), but it seems that if the Chinese government wishes to get really serious about biomass, wood pellets cannot remain in banned indefinitely. It might take a while, but expect to see changes in policy in this respect.

NICE Tour
The international contingent was invited to visit a research institute called NICE, an anagram for National Institute for Clean and low carbon Energy, situated on the campus of Shenhua Group, China’s largest mining and energy company. Shenhua is state owned. It started as a coal mining company, but has diversified into power and transportation. Today it runs the country’s largest fleet of coal fired thermal power stations, owns 2,000 miles of railroad and a couple of ports. The company has made huge investments in wind and solar, which currently amount to 7GW of its 80GW capacity. The company employs 200,000 people and its first quarter profits were said to be between USD$3 and 4 billion. Shenhua is in discussions to merge with two other large state-owned utilities, which will probably make it the largest power company in the world. (More info here en.wikipedia.org/wiki/Shenhua_Group .)

Shenhua is not focussed on biomass co-firing. Many of its thermal power stations are in the north (near its coal mines) and reasonably removed from any material biomass sources. Shenhua is growing its renewable portfolio in wind and solar and is doing a lot in hydrogen. The company will supposedly be rolling out 300 hydrogen filling stations across the country in the next five years. However, at some stage post-merger (due to size alone), Shenhua is likely to become a target of government pressure to co-fire. Its generally poor proximity to agricultural residues could make it an ideal candidate for imported wood pellets. Furthermore, Shenhua’s port ownership should help the logistics of importing wood pellets once that ban is lifted.

Shenhua set up NICE in 2009 initially to find new commercial applications for coal. NICE has an imposing line up of technology, from mass spectrometry labs to a Fischer-Tropsch pilot plant. NICE’s efforts have lead to the discovery of an ultra-strong plastic, a revolutionary water treatment process and a quick charging soft carbon battery technology, amongst others. NICE has an advisory board of about 20 eminent scientists including four Nobel Prize winners. The person showing us around had also won a Nobel Prize for his work on climate change. He tells us about 80 per cent of the 300 or so employees of NICE hold Masters degrees or higher. Many of them were recruited overseas.

This visit was an impressive window on what is possible in China today. Despite the easy rhetoric, we would be wise to not discount the Chinese efforts and we should continue to pay close attention to what is going on there.