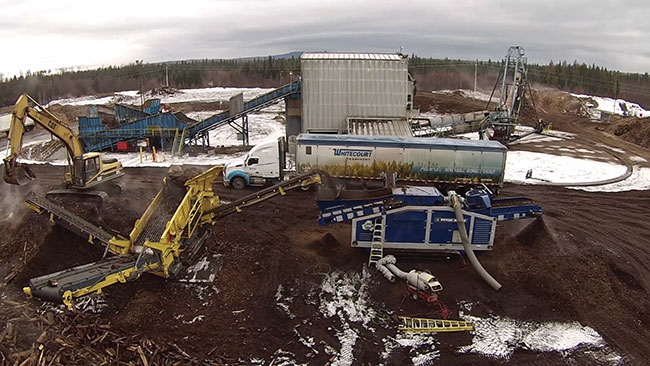 With constrained fibre supply in Canada’s western provinces causing concern on one front, and the need to deal responsibly with mill waste and derive maximum value from residuals on another, some power producers and their suppliers are getting innovative.

But in September 2019, Whitecourt Power found its inventory was running low. This was due to multiple compounding factors.

“We had an agreement with Millar Western to consume residual material from both their sites, but our plant ended up in a shutdown in 2017 for facility repairs and upgrades. While it was down, we accumulated a large stockpile of fuel, and we maxed out the storage at our own site,” Brennan Anderson, steam chief and operations manager for Whitecourt Power, explains.

Consequently, Whitecourt Power asked Millar Western to stop sending its Fox Creek residuals to the power plant. But accumulating the waste at the sawmill could have created a fire hazard. Instead, Millar Western obtained a variance from the provincial government to temporarily re-start a decommissioned burner at the facility.

Meanwhile, from 2017 through September 2019, Whitecourt Power used up its accumulated stockpile of wood waste while continuing to consume residuals from Millar Western’s Whitecourt mill.

As their on-site stockpile declined, instead of travelling further to get waste wood, Whitecourt Power decided to take on a new project with Millar Western and Whitecourt Transport: taking material from a 20-year-old yard waste pile at the Whitecourt sawmill.

“We had a historical legacy pile of wood waste, both hog and log-yard debris, that had built up over a significant number of years,” Tom Thompson, general manager of wood products for Millar Western, says.

“But, when we started delivering this material to the power plant, we found that it was highly contaminated with rocks and debris,” he explains. “We tried a number of methods to find veins of clean material and send that over to Whitecourt Power.”

Initially, Whitecourt Power agreed to take the material without removing rock or debris, but this material was “by the far the most contaminated we’ve seen,” Anderson says.

“A large piece of trap metal had made its way into the supply, ended up going into our wood crusher and causing pretty good damage,” he explains. “So, we were down for about a week. It was during that week that we decided we had to try to do something more.”

“Frontline was pretty confident that they’d have an assembly of equipment that would do the job,” Rosnau says.

Whitecourt Transport moved the Frontline equipment onto the power plant site and resumed hauling the yard waste with their fleet of Tycrop and Titan livefloor trailers. The company also supplied a Caterpillar excavator to sort and feed material to the Keestrack K4.

Other costs associated with the project included fuel for the rental equipment and salary for an additional operator who operated the equipment and a front-end loader that moved the rock to a waste pile and the clean material to Whitecourt Power’s conveyors.

The equipment began operating on Sept. 25, 2019. The project ran until Nov. 2, with about 300 operating hours put on the equipment.

Challenging material
The Keestrack K4 was set up with a four-inch top screen deck to screen out rocks and wood pieces over four inches. Any rocks under four inches went to the Edge MC 1400 density separator, which separated out the majority of the rocks, Anderson says.

However, the wood material coming out of the density separator didn’t meet Whitecourt Power’s size specifications, so it had to be re-processed through their existing wood hog.

According to Anderson, the Edge MC 1400 was around 80 to 90 per cent effective. Unfortunately, this meant there was still some rock in the material going into Whitecourt Power’s boiler.

An approximate analysis on the material also revealed that it had lost 50 per cent of its volatiles and produced eight times more ash than the company’s normal supply.

Whitecourt Transport hauls all the hog fuel from Millar Western to Whitecourt Power and moved the Frontline equipment onto the power plant site with their fleet of Tycrop and Titan livefloor trailers.

These problems meant that the cleaned hog fuel could not be fed directly into the company’s boiler. Instead, one loader bucket of the cleaned material had to be mixed with three loader buckets of their regular waste supply.

“That’s not without cost, because we still had the rock to contend with. Due to the design of our furnace, we have to somehow get rid of the rock, because if the inventory of the rock in our furnace gets too high, it stops our process and we have to shut down or reduce our output in case it causes other issues,” Anderson says.

To combat that issue, the company drained some of the material from their bubbling fluidized bed boiler. The boiler has approximately 60 tonnes of sand in the furnace heated up to 800 C, which allows Whitecourt Power to burn higher moisture content material because it provides a large heat sink, Anderson explains. But draining some of the rock meant they were also losing some of the sand, which they then had to replenish.

On top of that, the higher ash content overloaded the plant’s flue gas bag house, so once that entered their ash silo, it had to be removed. Of course, there’s a cost to removing it, Anderson says.

“It creates a whole trickle-down effect from using this material,” he says.

This resulted in 14,000 tonnes of clean material, approximately half of Whitecourt Power’s monthly supply, Anderson says.

“The success of this type of project is really dictated by the fuel,” Anderson says. “In this case, the material had degraded to the point where it’s not really fuel; it’s more some sort of composted mixture. With the added processing steps, this ended up being a pretty costly fuel, considering its relatively low energy value.”

The project taught all of the participants some important but “expensive” lessons, Anderson says.

For Millar Western, Thompson indicated that the equipment rental, labour and loading costs were significant. On the other hand, “it was a very successful project in that it was well executed and well handled by all four partners – our company, Whitecourt Power, Whitecourt Transport and Frontline Machinery. And, it definitely delivered results,” he says.

“We still have approximately half the legacy pile that we have to manage,” Thompson adds. “So, we’ll be looking to put together another project of a similar nature.”

Whether and when that happens will be dependent on market conditions, he says.

Despite the difficulties the material presented, Anderson, Rosnau and Thompson all agree that the equipment worked well.

“Overall, I was fairly happy with the equipment side of it – it functioned pretty much as expected,” Anderson said.

“The Frontline equipment is mobile, and that’s not necessarily a requirement in this case,” Rosnau adds. “I think that it worked well as a test case for us all to look at the efficiency of air separation to remove rock.

“It was a great opportunity to use a piece of mobile equipment to test out a certain technology that may find its way into becoming built-in mill infrastructure.”

The project “gave us some insight into the cost and what we’d do differently if we ever had another legacy pile,” Anderson adds.

For example, he would take multiple samples of the material to be analyzed first, before determining whether to proceed with cleaning it up.

His advice for sawmills or power producers looking to do something similar is to ensure they know what the material is and whether their boiler can handle it.

But looking at the bigger picture, this project is emblematic of a larger trend in the industry: the need to use as much fibre as possible.

This trend is “really taking off in B.C.,” Rosnau says. “The pellet industry is really driving this, and with this industry moving into Alberta, utilization of residual wood fibre will increase. The low-hanging fruit is all the sawmill residuals, but eventually this supply will dry up and the pellet and energy producers may be looking at forest residuals.”

Whitecourt Transport plans to facilitate similar projects for other clients in the future.

“We are getting more active in the grinding and wood separating business. Forest residuals have become an important part of the fibre basket in British Columbia and I think they will become a bigger part of the mix in Alberta,” Rosnau adds.