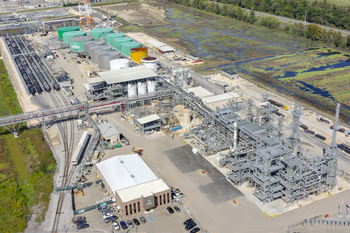 Diamond Green Diesel, a joint venture of Valero Energy Corp. and Darling Ingredients Inc, currently is the largest commercial advanced biofuel facility in the United States, producing 275 million gallons per year of Honeywell Green Diesel, a high-quality renewable fuel. The plant expansion is expected to be completed in late 2021, and will increase the facility’s annual production by nearly 150 per cent, to 675 million gallons.

“Demand has steadily increased for renewable diesel in the United States, Canada and Europe as advanced biofuel mandates seek to reduce greenhouse gas emissions,” said Jim Andersen, senior business leader of Honeywell UOP’s Renewable Energy and Chemicals business. “With the expansion of its facility using our Ecofining technology, Diamond Green Diesel will continue to meet growing demand for low-carbon fuels, and become one of the largest plants in the world for producing those fuels.”

With low carbon mandates in North America and Europe projected to continue driving strong demand and premium pricing for renewable diesel, the expansion will add a second, parallel plant adjacent to the existing facility. With the expansion, Diamond Green Diesel will also produce about 60 million gallons per year of renewable naphtha for the production of gasoline.

The Honeywell Ecofining process, developed in conjunction with Eni SpA, converts non-edible natural oils, animals fats and other waste feedstocks to Honeywell Green Diesel, which is chemically identical to petroleum-based diesel. Honeywell Green Diesel offers improved performance over commercial biodiesel and petroleum-based diesel, and can be used as a drop-in replacement in vehicles with no equipment modifications. It also features an 80 percent life cycle reduction in greenhouse gas emissions compared to diesel from petroleum, and features a higher-cetane diesel value to provide better engine performance with fewer emissions.

The biomass-based diesel produced by Diamond Green Diesel is a qualified Advanced Biofuel under the U.S. Environmental Protection Agency’s Renewable Fuel Standard, which requires a minimum volume of transportation fuels sold in the U.S. to contain renewable fuel as a way to reduce greenhouse gas emissions.

In addition to Ecofining technology, Honeywell has commercialized the UOP Renewable Jet Fuel Process, which originally was developed to produce renewable jet fuel for the U.S. military. Honeywell Green Jet Fuel produced by this process technology can be blended seamlessly with petroleum-based fuel. When used in up to a 50-per cent blend with petroleum-based jet fuel, Honeywell Green Jet Fuel requires no changes to aircraft technology and meets all critical specifications for flight.