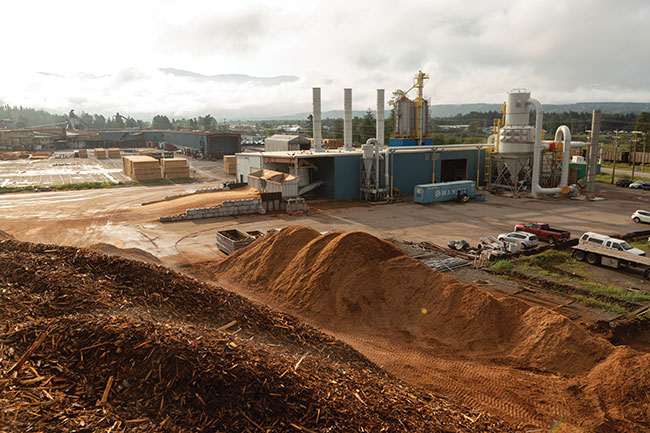 Skeena Bioenergy’s $20 million plant came online in the second quarter of 2019, but challenges prevented it from operating under normal conditions until October 2020. Photo courtesy Skeena Bioenergy.

As the forest industry increasingly recognizes the need to use as much fibre as possible, more and more sawmills are exploring the opportunity to produce wood pellets. One such sawmill is Skeena Sawmills, based in Terrace, B.C.

In 2018, the company began the process of building a new pellet plant under the name Skeena Bioenergy. The $20 million plant, which can produce up to 75,000 tonnes of pellets per year, came online in the second quarter of 2019. However, it wasn’t until October 2020 that the plant began operating under normal conditions.

A bumpy ride
The main goal for Skeena Sawmills in building this plant was to add value to the mill’s residuals and bring more wealth into the surrounding community, Roger Keery, CEO of Skeena Sawmills and Skeena Bioenergy, explains.

“Our first priority was to have a plant that was capable of processing all of the residual material that the sawmill produces, in both its current configuration and what we plan for in the future,” Keery says.

The second was to build a plant that was as safe as possible and would have minimal environmental impacts, in terms of greenhouse gas emissions and noise and visual impact on the surrounding community.

The third priority was “to build a plant that was state-of-the-art in terms of production cost, efficiencies and product quality,” Keery says.

While the majority of fibre for the plant comes from the sawmill, the company also uses fibre from select suppliers in the surrounding areas, including a log sorting business in nearby Prince Rupert, B.C.

“They do a lot of trimming of their logs, and the trim pieces were just accumulating, going to a landfill. Now that we have a pellet mill, we’re grinding those and bringing those to our mill to use as fuel,” he explains.

“We’ve done a couple trials of that, and we’ll do more,” Keery says. “It helps the community, and makes better use of the material that otherwise would be burned.”

The plant itself brought 22 new jobs to the surrounding community, and helped to secure the sawmill.

But, as mentioned above, Skeena faced some challenges that prevented the plant from running at full capacity.

The main challenge facing Skeena was rail transport. When they first began working on the pellet plant, they formed a partnership with the nearby Kitsumkalum First Nation. The Kitsumkalum First Nation has a contract to haul the pellets from the plant to the rail head. At the time, they were working to build a new rail siding, which was meant to come online when Skeena Bioenergy started, Keery explains.

However, for various reasons, the project was delayed and was not officially opened until October 2020. In the meantime, CN Rail allowed Skeena to use a small nearby rail siding.

Unfortunately, “it was a real problem for us,” Keery says. “They couldn’t service it effectively; it required service three times a week, and we had a difficult time with that. So, from the time we started until October last year, we were constantly having to shut the plant down because we were out of rail cars.”

Now that the plant is running under normal operating conditions, Skeena can better evaluate how well it is working.

“So far, we’re quite happy with what we see. It meets our expectations in terms of its running volume, and our pellet quality is very good,” Keery says.

Inside the plant
As a new player in the wood pellet industry, Skeena turned to a veteran equipment manufacturer to design and implement the plant: Prodesa.

The plant itself is set up in a way that emphasizes efficiency and safety. Fibre that is stockpiled in the yard goes to the plant through a double infeed system.

“This allows us to use products with different characteristics and blend them together to get the finished product that we want,” Keery explains.

The fibre then goes to a Bruks Siwertell green hammer mill, and then to a Swiss Combi gas-fired belt dryer with three 16-million-BTU gas burners. After this step, the fibre goes to another Bruks dry hammer mill, and then on to a dry storage bin, which feeds three Promill pelletizers. The pelletizers are capable of increasing the plant’s production capacity from 75,000 tonnes per year to 96,000 tonnes, but Keery says the company wants to get more experience running under normal operating conditions before they increase production.

Pellets then go to a pellet cooler, which feeds a screen. After screening, the pellets are stored in two 100-tonne truck-loading silos. From there, the pellets are trucked to the Kitsumkalum First Nation’s rail siding two kilometres from the plant, where they are loaded into rail cars for shipment.

Prioritizing safety
Skeena has also implemented several measures to ensure the safety of their employees, both with regards to COVID-19 and to mitigate dust and explosion hazards.

The company was among the first to implement safety measures to prevent the spread of COVID-19, installing handwashing and sanitizing stations, requiring masks, and more, Keery says.

“We tried to respond to the COVID threat early when it started – some of our management team saw that this was going to be a big problem,” he explains. “So, we started implementing protective measures at a point when people were actually not viewing COVID as a big problem.”

For example, two operators normally work in a control room at the plant. To ensure employees in the room would be safe, Skeena installed a partition, dividing the room in half, and installed air exchange systems to maintain fresh air.

Consequently, the company hasn’t had any stoppages in production due to COVID-19, nor have they reported any positive cases among their employees.

Of course, outside of a pandemic, safety is still critical for wood pellet operations. Skeena has therefore installed multiple safety systems. The material handling systems, for example, have rock traps on the green and dry end, as well as metal traps to remove contaminants from the raw material. Skeena has also installed oscillating fans throughout the plant to prevent dust accumulation on horizonal surfaces.

The Swiss-Combi dryer also has spark detection systems in the burners and water-deluge systems to control fires.

“All of our components have been designed to the NFPA safety rules,” Keery says. “That means there’s spark detection systems anywhere there is an explosion possibility, as well as exploding ports in many of the structures that could have an internal explosion occur. A lot of attention has been paid to ensuring that the rules around handling wood dust, which is explosive, meet the NFPA regulations.”

Additionally, any piece of equipment that Skeena felt was a potential liability for explosion, such as the dry storage unit, is housed outside of the main building, Keery says. And, throughout the plant, systems have been installed that allow operators to stop production in the event of a fire or other disruption, to remove the potentially hazardous material.

Part of this focus on safety is borne out of experience – a belt dryer fire in July 2019 forced the plant to shut down for a month.

“We’ve since had to undertake a number of protective measures to identify and stop fires,” Keery says.

Now, any sparks that do break out are quickly dealt with and often don’t result in a stoppage of production, he adds. Skeena has also formed a working group to continue improving their ability to prevent belt dryer fires and respond to them effectively.

“That’s going to go on for some time,” he says. “We probably made six or so changes to improve the situation and we still have several more that we’re planning to implement to further improve that.”

Skeena Bioenergy is not alone in experiencing a belt dryer fire. This is an industry-wide issue – one that Keery would like to see addressed in the future. The industry has put together a task force to work on this issue, and the Wood Pellet Association of Canada held a belt dryer symposium in November last year, where Skeena Bioenergy spoke about their experience.

Growing the business
After overcoming these challenges, Keery is excited to get a year of normal operation under his belt. This will allow the team at Skeena to better understand how well the plant performs on an ongoing basis, establish the basic economics of the business, and focus on training employees, he says.

Looking further down the line, Skeena is exploring the possibility of producing specialized grades of pellets. In general, wood pellets are made to a single standard, designed as a fuel.

“But, we think given the variations in the type of fuel that’s available, there’s some opportunity to make more specialized grades that fit other uses better, and, to do that, you have to be able to deliver a differentiated product to customers,” Keery explains. “We think we could do that and we’re actively looking at doing those things.”

The company is also looking at entering new markets, such as China. Skeena Bioenergy is owned by a family that immigrated from China, and therefore has strong connections with the country.

Currently, most of Skeena’s pellets are exported to Japan, although the company also provides pellets to some local commercial customers. This is another market Skeena wants to build upon.

“I think that there’s a real opportunity in Canada to use wood pellets as a renewable resource for our own domestic use,” Keery says. “Canadians aren’t doing that at any scale, and I really think that’s a missed opportunity.”

To address this issue, Keery says the industry needs to build public awareness about wood pellets as a renewable resource.

“That’s something I’m quite passionate about for us as an industry and as a company. It’s important to us that we support local community uses of pellets and try to grow those,” he says.