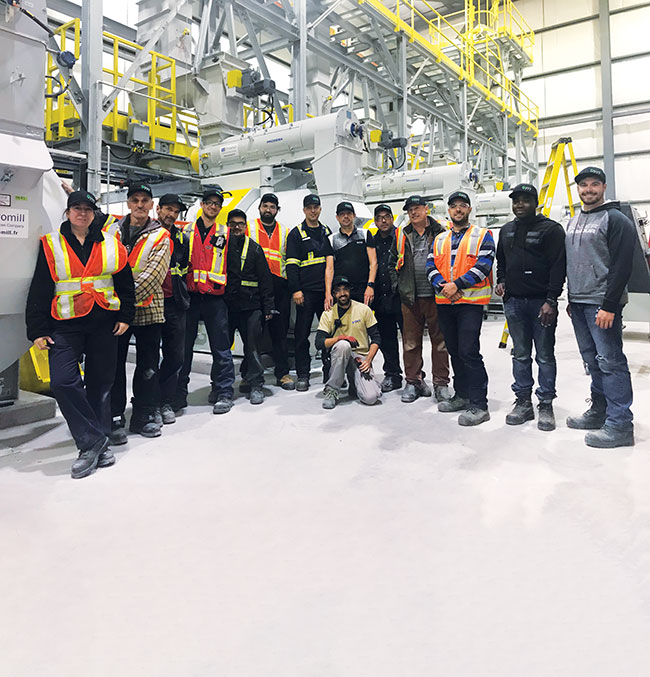 The team at the Granule 777 pellet plant, which began operating in September this year. Photo courtesy Granule 777.

Chapais, Que., is now home to the biggest wood pellet plant in Eastern Canada, Granule 777. The $70-million plant, built by Barrette-Chapais sawmill, began operating in September and has a total production capacity of 210,000 tonnes per year.

Yann Sellin, Granule 777’s general manager, tells Canadian Biomass that it is one of the largest industrial pellet plants in Canada, after Pinnacle Renewable Energy’s Burns Lake and Entwistle plants.

But why did Barrette-Chapais decide to build their own industrial pellet plant?

There are a couple of different reasons, Sellin explains. The company wanted to use as much of the fibre coming into the Barrette-Chapais sawmill as possible. The mill processes close to one million cubic metres of wood on an annual basis, making it one of the largest in Quebec. It consequently produces a lot of sawdust, shavings, bark and chips. In order to control profitability in changing market conditions, the mill realized these residuals needed to be recovered.

“Throughout the many years that the sawmill has been operating, demand and prices for our core product have been fluctuating significantly, and to create an alternative to such a market situation, we decided to build the pellet plant,” Sellin elaborates.

The plant can use any of the fibres coming from the sawmill, and has the potential to consume some harvesting residuals. “In the future, we might start contemplating going into the bush to harvest some biomass fibre, bush grinds or things like that, for quality,” Sellin explains. “But in the first year of operation, it’s not in the short-term plan.”

The company’s main reason for building the pellet plant was to help maintain and secure the sawmill’s 450 employees for the long term.

“We looked at different options, and the industrial wood pellet business was a market that was of a growing nature, and we could see that there was a significant future for that product,” Sellin says. 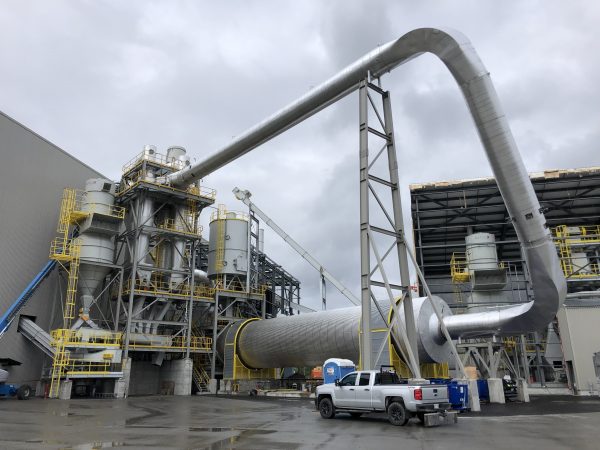 TSI provided the dryer system at the plant, which included a 30m2 grate area heat energy system and a dryer system centered around a 14 by 80-foot-long dryer drum. Photo courtesy TSI.

“We didn’t have any major delays, which is quite surprising because we are in a very harsh environment in terms of climate,” he explains. “We did a fast-tracked installation process and design throughout the project because we had to pour concrete and it’s nearly impossible to do so after the end of November in Chapais until mid-April.”

The harsh conditions in northern Quebec also played a role in the plant’s design, which is small despite producing such a large quantity of wood pellets.

The challenges brought by winter in Quebec are familiar to employees at Barrette-Chapais – the sawmill has been operating for more than 40 years. Consequently, Sellin and his team knew what to be aware of when it came to specifications for Granule 777’s equipment.

“People have a very good understanding of the challenges winter brings. For example, all the devices have been designed and rated to operate at -40 C, and not the regular -20,” Sellin explains. “Some parts of the equipment are also insulated differently than what you would find in any other pellet facility.”

A simple set up
Inside, the pellet plant is set up in a fairly simple way, Sellin says. Three pneumatic conveying systems bring the three main residuals – sawdust, shavings and chips – from the sawmill. Front-end loaders then feed the different materials from various locations in the plant.

The materials then go into the pellet mills, followed by a cooler underneath it, and a screen underneath that.

The green hammer mills come from Bruks Klockner, while Promill provided the dry hammer mill and the pellet mills. German company Geleen provided the counterflow cooler while TSI supplied all of the drying elements, including the furnace and dryer drum.

To prevent pitch buildup, the dryer system’s gas ductwork and exhaust stack are ‘double-ducted,’ which in turn reduces downtime for cleaning maintenance and the chance of fire

Once the material has gone through the cooler, it goes outside into two different holding silos, and then to Barrette-Chapais’ shipping silo at the Port of Grande-Anse, in Quebec.

“It’s a very common, usual pellet design,” Sellin says. This was done on purpose. Granule 777 asked Prodesa to handle the engineering, design, and procurement of the equipment, and to supervise the installation because of their expertise in the industry.

“I think most of the manufacturers we have chosen are the best in all of their areas,” he adds. “Klockner for the green hammer mill are very good, a well-reputed brand. Same thing for Promill on the press.”

The pellet plant is fully automated, so there are very few operators compared to the amount of machinery operated. “Everything is computer-operated, PLC [programmable logic controller] driven, and one operator can power stop or accelerate all the equipment and machinery in the power plant,” Sellin explains.

Even so, an additional 40-60 jobs have been created from the new operation, including in transportation and at the company’s storage facility at the Port of Grande-Anse. 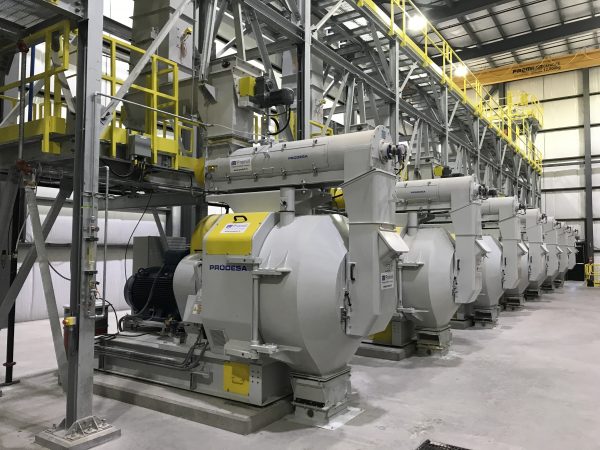 Safety first
When asked about safety, Sellin says it’s the most important aspect of operating the plant.

“The first thing I’m reminding our employees of is that we are producing fuel, not wood,” he says. “The aim of that product is to burn and to generate energy, so it needs to be considered as if it was gasoline.”

Consequently, Granule 777 is operating a modern, up-to-date process in terms of safety. The plant has all the safety systems that any pellet plant should have, Sellin says, such as spark detection, sprinklers, and heat sensors. The drying area is supervised by a Flamex spark detection system, while Firefly spark detection is used in the rest of the plant.

“Most of the equipment and conveyors are not welded components, but bolted, so it reduces the risk of adding people doing hard work inside the belt line,” he says. “We spent a lot of time during the design phase of the pellet plant regarding safety measures, making sure that we are protecting the employees and the plant itself.”

A big investment
Now that the plant is up and running, the company plans to export the majority of their pellets to the U.K., which Sellin says is the biggest market for wood pellets.

But exporting the pellets required another big investment – more than $15 million went into building a storage facility at the Port of Grande-Anse.

“The Port of Quebec City used to have wood pellet silos, but unfortunately, they have been sold to a company that is now using them for grain. So, we were left with very few options. We looked at those different alternatives, and at some point, we decided to build our own storage infrastructure,” Sellin explains.

“To do so, we looked at what port to utilize, and one of them became obvious – the Port of Grande-Anse, due to the distance and the fact that it was a port where we could establish our facility quickly.”

Granule 777 came to an agreement with the port and built two 21,000 tonne-capacity storage domes, featuring “all the typical systems that you find in a port like elevators, conveyors and so on,” Sellin says.

To get the pellet plant and the port storage infrastructure up and running, the company had help from several government agencies: Natural Resources Canada invested $15 million through its Forest Industry Transformation (IFIT) program, Canada Economic Development provided a $5 million repayable contribution, and the Quebec government invested $7 million.

Moving forward
Although Granule 777 only began operating in September of this year, Sellin says there haven’t been many hurdles so far.

“I don’t expect to see any major issues, because all the manufacturers and the design of the plant are proven manufacturing equipment or a proven design,” he says.

But the local team at Barrette-Chapais has never operated a pellet plant before, and Sellin acknowledges that there will be a learning curve. Properly training operators and ensuring they understand the importance of safety will be key. When winter comes in Chapais, they will also need to adjust to the impact of severe weather.

Ultimately, Sellin is excited about the opportunities Granule 777 presents, not just as a new player in Canada’s wood pellet industry, but as a way to recover and use as much of the tree as possible.