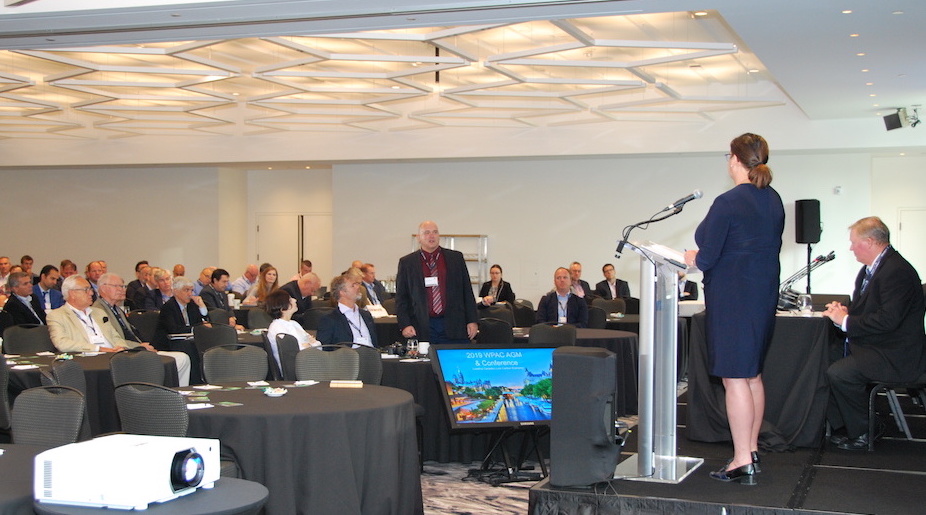 Beth MacNeil, assistant deputy minister with the Canadian Forest Service, takes questions during the WPAC 2019 conference in Ottawa this week.

With new pellet plants coming online, potentially favourable government policies in the pipeline, and growing global demand for wood pellets, Canada’s pellet sector is poised to significantly contribute to the global low-carbon economy. But, as speakers at the Wood Pellet Association of Canada (WPAC) conference reminded us, there are several uncertainties that will dictate the growth of the pellet sector in the years to come.

The annual WPAC conference and AGM took place this week at the National Arts Centre in downtown Ottawa with around 200 pellet producers, government officials, researchers, equipment manufacturers and other stakeholders in attendance. Ottawa was a fitting location for WPAC to share its message in advance of the upcoming federal election in October.

In her opening remarks, Beth MacNeil, assistant deputy minister with the Canadian Forest Service, picked up on WPAC’s 2019 conference theme of leading Canada’s low-carbon economy. “The theme is a timely and important one,” MacNeil told the audience. “Forests will continue to play an important role in our future as we transition to a low-carbon economy . . . The fact that so many of you are here to discuss challenges and opportunities in bioeconomy shows the commitment of the wood pellet sector.”

The government supports pellet producers – directly or indirectly – through programs like the Forest Innovation Program, Investments in Forest Industry Transformation (IFIT) program, the Indigenous Forestry Initiative, Clean Energy for Rural and Remote Communities program, and the Expanding Market Opportunities program, several of which have been used by WPAC members to install new technology or develop new global markets, Waring said.

Yann Sellin, general manager of Granule 777, shared his company’s experience working with the government to help launch the brand-new, 200,000-tonne Quebec pellet plant, owned by Barrette-Chapais sawmill. The IFIT program support was the final trigger for company to launch the pellet project, Sellin said. “We are very happy with the process,” he said.

Several pellet heating projects were highlighted during the conference as evidence of the growing interest in wood heat as a low-carbon, cost effective alternative to heating oil or electricity.

Nikki Manitowabi, business development specialist advisor for the Wikwemikong Development Commission, said the project has been a worthwhile learning experience for the community, leading to new employment, greenhouse gas reductions, and support for Northern Ontario businesses. “There was a lot of education and training to get our community to be a pilot, and they are very proud of that,” she said.

P.E.I. has a remarkable number of successful bioheat projects, thanks in no small part to its chief boiler inspector, Steven Townsend. Townsend led the charge to adjust the provincial regulations to accept European boilers standards. Accepting these standards means high-quality European-manufactured wood boilers can be approved and installed in municipal and commercial buildings. To date, the province has 23 operation biomass plants, with six more coming online in 2020.

The plants are closely monitored by the province, Townsend said, particularly in regards to cleanliness and training of operators. “We are a success,” he said.

In his presentation on Canada’s proposed Clean Fuel Standard, TorchLight Bioresources managing director, Jamie Stephen, explained how changing the proposed regulation to allow for end-use fuel switching could amount to domestic pellet demand increase of 850-900,000 tonnes of wood pellets in provinces and territories that rely on high-cost, high-carbon fuels. While wood pellets, like all fuels, are not carbon neutral, it’s important to factor in low-cost options as well as the low-carbon options, and wood pellets fit that bill, he said.

“Why not tweak the policy so you can use a local fuel, reduce energy poverty and reduce fuel costs?” Stephen said.

Staffan Melin (centre), former research director for WPAC, was honoured with a plaque to commemorate his contributions to the wood pellet sector.

Global market demand for wood pellets is continuing to rise, as experts have predicted for years, although uncertainty remains a concern for Canadian industrial pellet producers, multiple speakers shared.

In Europe, Hawkins Wright is predicting EU and UK utilities to increase industrial wood pellet consumption by five million tonnes a year over the next two years, associate director Fiona Matthews shared with the audience. Globally, demand is expected to rise by 4.2 million tonnes in 2019, and 4.3 million tonnes in 2020. In order for supply to meet that demand, pellet production capacity will need to grow by at least 14 million tonnes. “We think the supply chain is completely unprepared to meet this new demand,” Matthews said.

UK utility Drax Power’s head of fuels, Rick Taylor, shared that the utility is looking to make its supply chain 30 per cent more efficient in the coming years in order to receive approvals from government to continue wood pellet firing.

Vietnamese pellet exporters are turning their attention to Japan, which has a more certain market, Strauss said. In 2019, the Vietnamese share of pellet imports overtook that of Canada in Japan. FutureMetrics expects Japanese demand to remain relatively certain due to the number of conversion projects that are already approved and in the pipeline, Strauss said.

A running theme in all WPAC conferences is the topic of safety at pellet plants, and this year was no exception. Keynote speaker Spencer Beach drove the importance of safety home with his poignant story of the consequences of an unsafe work environment. Read about Beach’s story here.

Scott Bax, chair of the WPAC Safety Committee and COO of Pinnacle Renewable Energy, followed Beach’s talk by speaking about the realities of dealing with hazardous combustible dust in pellet plants. “It’s not a matter of if an event will happen . . . Stop and ask, what hazards are we creating and is there something we need to do differently?”

One way to ensure you’re considering all the options is to join the WPAC Safety Committee, Bax said.

“Great safety isn’t about being perfect; it’s about caring and having a system in place to make sure it’s a good outcome,” he said. Sometimes that means failing and learning from that failure, and sharing lessons learned within the pellet world. “We don’t compete when it comes to safety,” he said.

Putting that mantra into practice, Pacific BioEnergy’s vice-president of operations, Shawn Bells, shared a case study on a silo fire event the pellet plant experienced in 2017. “If you ever thought about trying to fight a silo fire yourself – don’t,” Bells said. He explained how firefighters used nitrogen injections to inert the silo air and minimize oxygen exposure that would fuel the fire.

“We learned a lot from this and we did a lot of infrastructure improvements after the incident,” Bells said. Read about their silo fire response here.

Links to presentations will be available shortly on the WPAC conference website.