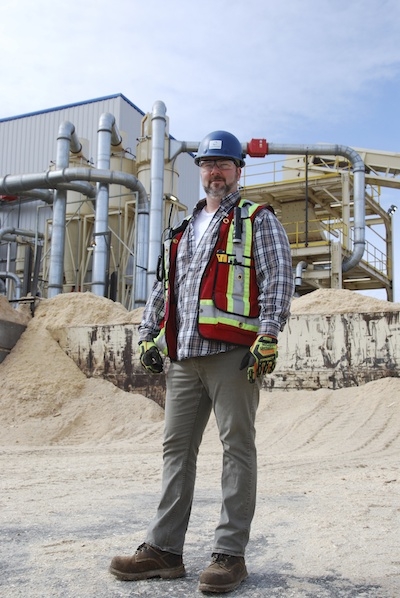 Pacific BioEnergy’s 350,000-tonnes per year pellet plant in Prince George, B.C., consumes up to 1,200 tonnes of fibre a day, sourced from sawmill and forest residuals as well as low-quality whole logs. A new multi-million dollar installation from Dieffenbacher allows the industrial pellet plant to reduce machine wear and access more fibre sources than ever before.

“It’s exciting technology,” Bells says during Canadian Biomass’ tour of the plant and new installation in April. He points to a bag filled with grain-sized rocks and flecks of wood throughout — the bag was collected from the ClassiCleaner’s smallest particle separation bins. After months in operation, Bells is more than pleased with the results.

[Watch video of the ClassiCleaner in action at Pacific BioEnergy.]

“This ClassiCleaner was a strategic investment to allow us to open up access to higher-contaminated fibre streams. It gives us the ability now to run the plant on 100 per cent forest residuals,” he says.

PacBio has a non-replaceable forest licence in the Quesnel forest district, which allows them to harvest 700,000 cubic metres annually. In partnership with Tolko, the company has a biomass pre-processing facility in Quesnel where fibre is chipped with an 84-inch West Salem chipper.

In 2010 the pellet plant began increasing its consumption of forest residuals, local spruce, pine and fir. On average about 30 per cent of plant’s diet is sourced from brush piles, but that has increased to more than 40 per cent, Bells says. The plant also consumes low-quality pulp logs, and sawmill residuals — chips, sawdust and hog streams — from nearby mills. The variety of fibre consumed is a both a blessing and curse, Bells says. More sources amounts to a steadier fibre supply, but the plant’s equipment needs to handle a wide spectrum of particle sizes and contaminants.

PacBio trialled a vibratory air knife separator five years ago in an attempt to handle forest residuals and sawmill hog streams, both of which have high amounts of rock and other debris. The system didn’t meet their requirements, which forced the company to look for another solution.

Bells toured two ClassiCleaner installations in Europe — one in France, and another in Ireland. He was impressed with what he saw. “Europe does an excellent job of recycling everything,” Bells says. But the pellet operation has unique demands.

The ClassiCleaner was commissioned in December after a 24-week project involving PacBio, Dieffenbacher and local firm, International Quest Engineering. One of their challenges was to install the system while the plant continued to operate 24-7.

The entire system is housed in three separate towers connected by a series of conveyors. A different size of contamination is extracted in each section, via a combination of scalping rolls, air knife separation, diamond roll beds and individual gravimetric separators.

“Our setup is probably the most challenging Dieffenbacher has had to do for two reasons: One, the volume this facility processes is in excess of 50 ODT an hour, and two, the spectrum of particle size that it has to clean. We have to treat everything from 100 per cent forest residuals to 100 per cent sawdust. It has to do the full spectrum of everything,” he says.

Bells says the conservative estimate is that the ClassiCleaner will reduce their maintenance costs by 10 per cent. Wear parts that were once changed multiple times a week are now checked once a week and left in place. He says they can hear the difference in the downstream equipment when the ClassiCleaner is not running.

“Now that we know how many contaminants are actually in our feedstock material, we endeavour to run the ClassiCleaner with 100 per cent uptime,” Bells says.

It’s not only the reduction in maintenance costs they can look forward to, it’s also the ability to access other streams of fibre that they normally couldn’t run because of contaminants. That will mean more access to forest residuals and sawmill hog that have the highest amounts of rock and other debris. The plant will be able to reliably handle this material without subjecting its equipment to increased wear.

Fibre enters the plant in one of three infeed bins with variable frequency drives, designated for either forest residuals, sawdust or shavings.

The forest residuals and sawdust lines are first treated to the ClassiCleaner where contaminants are filtered out and the feedstock material is classified by particle size.  The coarse material is fed into either the 800-hp Brunette BioSizer or the 500-hp LAMB Hog, which takes one to four-inch residuals and mulches it to a ½-inch minus. The smaller particulate bypasses the hogs and flows directly to the dryers with the shavings line that skips the ClassiCleaner.

The plant has two SolaGen dryers with 72-million BTU burners fuelled by wood dust, and supplemented by natural gas. Single ducts running from each of the dryers then split into two Allied Blower cyclones, each of which are close-coupled to either 400-hp Bliss hammer mills, or a 500-hp Andritz hammer mills.

From there paddle chain conveyors bring material to one of 10 Andritz pelletizers. Five of the older pelletizers have individual coolers underneath, while the five newer pelletizers installed in 2010 have a shared conveyor to bring the pellets to a large Law-Marot-Milpro (LMM) cooler. Vibrating screens extract the pellet fines, which are brought to dyers’ burners, and finished pellets are conveyed either into one of two storage silos or loaded directly into rail cars. The entire process from infeed to railcars is between 30 and 45 minutes.

New horizons
PacBio’s history can be traced back to 1994, when partners John Swaan and Carrier Lumber established Pellet Flame. The company became the first in Canada to produce industrial wood pellets for the overseas bulk commercial market in 1998. Today 100 per cent of the plant’s production is shipped to utilities in Europe or Asia.

“The opportunity in the Japanese marketplace is huge,” Bells says. “We’re geographically advantaged to ship in that direction rather than to Europe. Long term the Asia Pacific marketplace is our focus.”

Watch a video of the ClassiCleaner here.