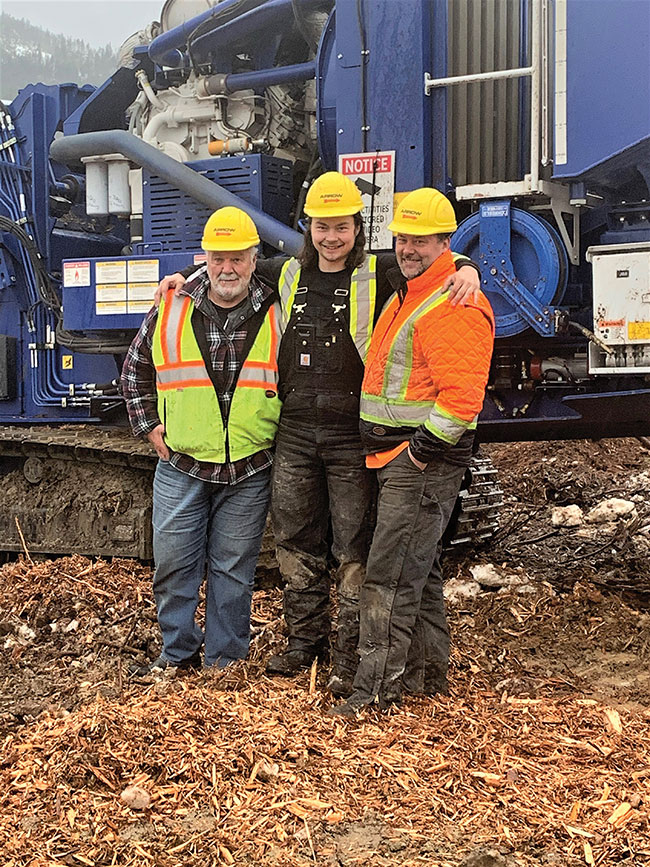 Along with his son, Benton, father, Mike, and others from the Arrow team, Kilba recently completed a project grinding residual wood leftover from earlier logging operations, where four blocks in the community forest were cut in order to resurrect a healthy stand of trees. The residuals left after harvesting usable sawlogs were grinded into hog fuel for sale to Domtar in Kamloops, B.C.

Kilba not only grew up in the community, but raised his family there before settling in Kamloops.

“Clearwater is a pristine and beautiful area that I have many fond memories of, and the Wells Gray Community Forest is a gem for the community,” he says.

Harnessing energy
When the Arrow team first looked at a fibre utilization project in the community forest, they were confronted by several challenges, including wet ground, large road ditches and haul distances to Domtar.

“There was a lot of fibre that could not be utilized by sawmills because of the amount of rotten wood typical of this type of stand,” Kilba explains. “Together (with the community forest group), we figured we could make economic sense of the project if we applied to FESBC (Forest Enhancement Society of BC) for a grant.”

FESBC approved a $720,748 grant, and a project plan for about $307,000 got underway last fall, once the summer months adequately dried out the area. The team from Arrow began harvesting the residual wood in the blocks in mid-October.

The funding made it economically feasible to haul the material, Kilba says. Otherwise, piles of fibre would have been burned on site. The FESBC grant represents the difference between the market rate and the cost of getting the product to his customer, he adds.

“Basically, we come up with all the costs to get the product to Domtar – our local buyer – and all those costs are tallied together, and there is a price that Domtar is willing to pay (the market price),” he elaborates

The funding also assured Arrow that their work was secure. As a result, they invested in new equipment for the project.

“We were able to go out and buy a grinder and make some changes to the trucks that would allow us to get to the bush where they typically wouldn’t go,” Kilba says.

The company bought a horizontal 2020 Peterson 5710D grinder with a 1050-hp engine and a 2019 Tigercat 875. They used a combination of B-train trailers 53-foot walking floors on Peterbilt trucks.

“We’ve added extra weight to the drives of the trucks so that they have better traction in the bush and can get up these logging roads. We’ve been able to make some of those adjustments that have allowed us to have better access to the fibre in the bush,” Kilba says.

“It was amazing to see trucks in the forest hauling out fibre,” he continues. “Early in my forestry career, I had contracts to burn slash piles like this. We would light up the piles, and there was an amazing amount of energy coming from them. I had always wondered how we could harness that energy instead of wasting it. With the introduction of boilers that use this wood fibre, we now take this fibre we once burned and use it to create electricity.”

The way of the future
In total, Arrow ground 18,992 cubic metres of wood fibre, which roughly translates to 350 logging trucks worth of fibre. The ground-up fibre was transported to Domtar to generate electricity to run operations, with additional green energy being put back to the grid.

The grinding project not only created an estimated 212 person-days of work, or close to 1,700 employable hours, but, by avoiding the burning of slash piles, the Clearwater airshed was spared smoke from fires – something George Brcko, WGCF general manager, and many Clearwater residents appreciate.

“As a community forest, we can be nimble and innovative in finding ways to be collaborative and get the work done,” Brcko says. “The grinding and hauling of these residuals meant that we didn’t have smoke hanging in our valleys from burning slash.

“Additionally, by removing the leftover wood fibre, this means we lessen the opportunity for a catastrophic wildfire in these areas. Without FESBC filling the gap financially, this project would not have happened. This kind of collaboration and support of community forests is the way of the future, and I believe just the tip of the iceberg in forest stewardship as we all work to do things better.”

The Wells Gray Community Forest has been an asset to the citizens of Clearwater as revenues generated from operations flow directly back into the community. Since 2004, almost $3 million has gone back into community projects such as seniors housing, summer camps for children, and accessibility projects like multi-use pathways, which is a boon to the community, notes Jennifer Gunter, executive director of the B.C. Community Forest Association.

“As we work to grow the bioeconomy and make our communities and forests more resilient, FESBC is providing the missing link by enabling community forests and local entrepreneurs to partner on innovative projects like this,” she says. “By supporting the utilization of residual fibre, multiple benefits are created for the communities, the forests and the province as a whole.”

Helping to fund and oversee the project on behalf of FESBC is operations manager Dave Conly.

“Arrow, in partnership with Domtar, has been able to develop great solutions with our local community forests, and by using fibre that would otherwise be wasted, they are creating well-paying jobs and assisting the province in achieving climate goals,” Conly says. “Overall, FESBC projects will have generated 5.3 million tonnes of net carbon benefits which is equivalent to removing 1.1 million cars off the road for a year.”

Conly adds forestry is an ideal way to achieve British Columbia’s and Canada’s climate change targets while at the same time create more jobs in the bioeconomy.

“I absolutely love that Arrow found a way, in partnership with FESBC and our community forest, to utilize residual wood fibre or slash,” Clearwater Mayor Merlin Blackwell says. “Our local Forestry Working Group – a group comprised of city councillors, local government representatives and industry stakeholders – has long advocated for this kind of work to be done because of the countless benefits.”