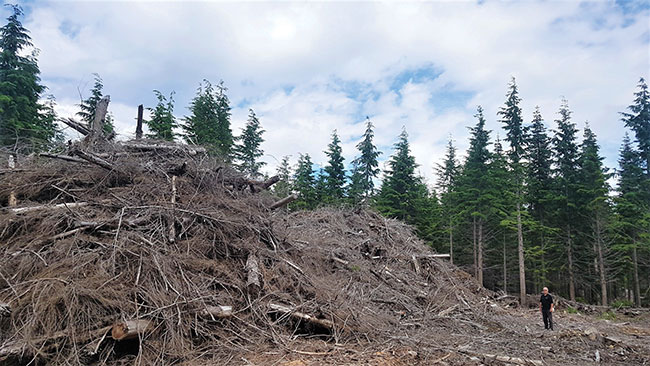 An hour’s drive inland from the coast of Northwest B.C., along the Skeena River, Terrace Community Forest (TCF) has found a new way to increase fibre utilization from second-growth tree stands: grinding and trucking wood waste.

The company, founded in 2006, is licensed to harvest up to 30,000 cubic metres (approximately 650 logging truck loads) per year over three different operating areas around Terrace, B.C. In the past few years, TCF has been focused on commercial thinning second-growth tree stands, bringing hemlock and balsam to a processing area to be delimbed and cut-to-length.

Their operations, unfortunately, resulted in a lot of wood waste. Rather than burn that waste, TCF stockpiled 15,000 cubic metres of wood waste to dry for two years, to reduce the wood’s moisture content.

During that time, Kim Haworth, the sole staff member and general manager of TCF, looked for ways to utilize the fibre. When Skeena Sawmills announced it would build a new pellet plant in Terrace – Skeena Bioenergy – Haworth saw an opportunity. But the cost of grinding and transporting the wood waste was still uneconomical for TCF.

The solution came in the form of a $443,000 grant in June this year from the Forest Enhancement Society of BC (FESBC).

“We were very supportive [of TCF] that they had all of these waste piles that were scheduled to be burned, and with the recent opening of the Skeena Bioenergy pellet facility, there became an opportunity to utilize that. Otherwise the nearest facility was over two hours away in Smithers, B.C.,” Pratt says.

“I think the big benefit is that we all want to do the right thing in the bush. None of us are in favour of putting what could be good fibre into smoke. So, the fact that TCF can be a good citizen and utilize as much of their residual fibre from harvesting as possible is a good thing. I think we all feel good about optimizing the fibre that could be used,” he adds.

Since its inception in 2016, FESBC has given grants to roughly 251 projects. The current project with TCF aligns with two of FESBC’s purposes: to increase the utilization of fibre and reduce greenhouse gas emissions created by wood burning.

Another one of FESBC’s goals is to help community forests utilize fibre so they are eliminating greenhouse gas emissions, creating an economically viable opportunity for the community forests and contributing to the bioeconomy.

“This kind of operation is new to this area of the province and it’s hoped it will help the community forests get operators to invest in the proper equipment and figure out how to do this economically. Then, over time, it becomes sustainable and funding isn’t required,” Pratt says.

Getting the job done
TCF began grinding immediately after the grant was approved. Having previously burnt roughly 60,000 cubic metres of tops, limbs and non-merchantable logging material, Haworth was excited to begin the project. For him, it offered a chance to fully utilize the TCF’s timber profile, create four new jobs and minimize the amount of CO2 equivalent that TCF would have otherwise released into the atmosphere through burning.

“I think the main thing with this particular project is that the second-growth management is particularly new in the Northwest. We’re struggling with the small-diameter log in terms of markets,” Haworth says.

TCF’s logs are typically exported overseas to China, but this market has become limited because of the amount of beetle-damaged spruce wood being exported to the country at low prices, he explains.

But this grinding project opens up a new market for TCF: the wood pellet industry.

“It gives us the opportunity to fully utilize the timber profile without distributing that material into the atmosphere,” Haworth says. “I think that’s a really good thing. It creates the jobs necessary to do it and a revenue stream not just for TCF and the local community, but for the provincial government as a whole through the stumpage process.

As of September, TCF had ground approximately two-thirds of the stockpiled material, which was being shipped to Skeena Bioenergy.

“I received enough funding this year to complete the grinding, so by the time the weather rolls around and changes to the point where we can’t grind anymore, I’ll be finished,” Haworth says.

He hopes to deliver any remaining material to the plant by early 2021.

TCF hires contractors to carry out most of its work, such as layout and supervision, management, tree planting, silviculture and harvesting.

Timber Baron hauls the logs with a fleet of Kenworth T800 trucks, as well as freightliner haulers for bush grind.

Grinding accomplishments
Although TCF doesn’t know the exact amount of fibre that has been grinded up until this point, Haworth hopes to have processed 30,000 cubic meters of fibre by the time the project is completed.

Operations have not been as efficient as they could have been, Haworth admits, because TCF’s burn piles were not set up with the intention of transferring them to a pellet plant. But, in the future, the amount of fibre that is utilized will increase as they proceed with the knowledge and experience gained from this project.

“When we do this moving forward, it’s not going to be in a way that we’re doing it right now. The information that comes out of this is going to change because we will be changing our format when we’re processing this material. Hopefully the information I get from this will allow us to go forward with our own operational funds to do this project,” Haworth says.

Moving forward, TCF plans to organize their wood residual piles in a way that meets Skeena Bioenergy’s demands. For this, they will be more proactive in separating tops and limbs for grinding and trucking.

TCF also plans to focus on moisture reduction as they work more closely with the pellet plant – especially for their harvested hemlock, which has a high moisture content and consequently requires more time and energy invested in drying. Haworth believes these changes will result in more positive numbers that will grow as the project becomes financially sustainable and begins to generate opportunities for continued grinding operations and more job creation. •