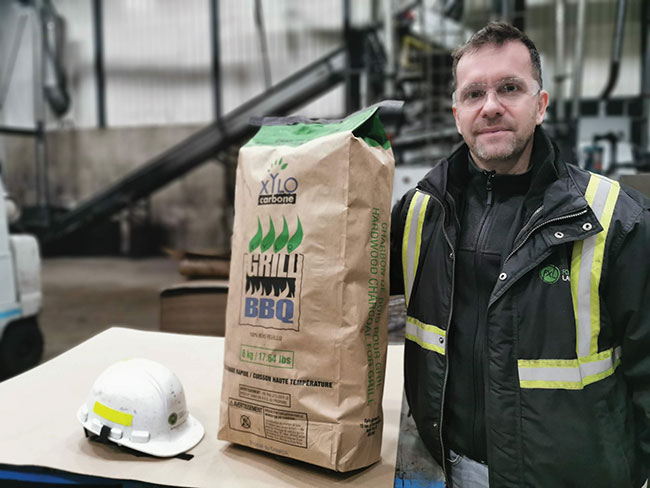 Antoine Langlois introduces the Xylo-Grill brand through which the company markets 80 per cent of the charcoal that is produced at its Saint-Tite, Que., plant. Photo courtesy Guillaume Roy.

Wood industry veterans Antoine and Simon Langlois have long noted two interesting trends: the challenges that some processers have in selling by-products in the fluctuating wood chips market, and Canadians’ fondness for charcoal barbecues.

In 2017, the pair (who are not related) teamed up with Fonds Valorisation Bois de la FTQ and Investissement Québec to invest $10 million in Xylo-Carbone, a company dedicated to converting wood waste into charcoal – biochar.

“Barbecuing is a more than $1 billion dollar per year market,” says Simon, a chemical engineer by training. “We set up operations in the Mauricie region because it is a good place to harvest maple, yellow birch and other hardwood and there are few other businesses competing to buy the by-products.”

The investment created 20 jobs at the company’s Saint-Tite, Que., plant. Xylo-Carbone operates on 15 hectares of land, which means that it had plenty of room for expansion.

The entrepreneurs point out that the local community quickly got behind the project, which involves transforming what Antoine calls “bazou” (low-quality) crushed wood, worth around $60 per tonne, into finished “limousine” charcoal worth between $1,200 and $1,500 per tonne.

“The quality of the workforce, many of whom are locals who are very attached to the area, is excellent,” notes Antoine. “They have been a big asset.”

According to Simon, Xylo-Carbone, which recovers all the gases and tars that it emits during the production process, operates the world’s only net zero charcoal plant.

“We stand out by fostering sustainable forestry practices and offering a renewable product,” he says, noting that most of the world’s charcoal is produced in developing countries by burning wood stuffed in a hole dug in the ground, a process that causes considerable pollution.

The two other traditional Canadian charcoal plants only produce limited output because their technologies are also highly polluting, he says. (Coal found in mines is not used by the barbecue market because it contains too many toxins).

The process
Xylo-Carbone has access to a guaranteed annual supply of 20,000 m3 from Forex Langlois, Antoine’s logging company. “We are able to harvest smaller trees, which allows us to recover more fibre,” he says.

The wood is then sent to a dedicated yard for sorting. Groupement Forestier Mauricie (a buyers’ group made up of industrial clients) purchases about 200,000 m3 a year. The lower-quality wood ends up at Xylo-Carbone.

At the plant, the wood is sawed first into 16-inch logs, and then split again into four-inch pieces using a splitter designed by Cardinal Saw. The pieces are then put into cages and shipped to two refurbished MEC rail dryers to lower the moisture content from about 50 per cent to 15 per cent. This helps speed up the processing during later stages.

The four-inch pieces are then transferred to large, sealed metal tanks, designed in-house by Xylo-Carbone, to be heated in the pyrolizers. “PLCs control the entire cycle, which lasts 10 to 12 hours,” explains Simon. In a traditional coal mine, a cycle lasts about a week.

Inside the tanks, the wood is indirectly heated to temperatures of up to 800 C. “The wood never touches a flame,” Simon says. “Carbon is built-up in the wood fibre through pyrolysis, by heating the wood in the absence of oxygen.”

This process generates three products: the biochar, gas, and pyrolytic oil. Xylo-Carbone only sells the biochar. The other by-products are used to generate the energy the plant consumes during the production process.

At the end of the cycle, the sealed tanks are moved with the help of overhead cranes and the charcoal is cooled for three days before being stored. The material is then transferred to a conveyor before being bagged using a machine that was initially designed for packaging potatoes (a product of similar size).

Xylo-Carbone can produce a tonne of biochar using just four to five tonnes of green wood, compared to the six to seven tonnes of wood traditional processes take. In addition, 90 per cent of the lumps of charcoal produced are of a suitable size for the more lucrative BBQ market, compared to less than 70 per cent in traditional charcoal plants.

Barbecue and other uses
The fact that Xylo-Carbone designed its own conversion units means that the company can control key parameters, including carbon levels.

“Our charcoal lights up quickly and produces intense heat, without dust,” notes Antoine. “Our clients appreciate this.”

About 80 per cent of Xylo-Carbone’s product is sold under the Xylo-Grill brand name to Costco, BMR and other major retailers. The company also produces charcoal for private label brands. While most of the output is sold in Canada, some is exported.

Xylo-Carbone is also developing new markets for the charcoal pieces that are too small to be used in the barbecue market (around 10 per cent of their product). For example, the company is currently carrying out tests with large car manufacturing subcontractors to produce a black pigment made from Quebec charcoal. Research projects are also underway to produce activated charcoal in order to develop water or air filters. Charcoal could also be used to fertilize agricultural soils.

By increasing its volume 15-fold, Xylo-Carbone could one day even supply metal processors, Simon estimates.

The company is also considering better leveraging the technology it has developed.

“Using our process, we produce all the energy we need and we still have surpluses,” notes Antoine, who believes that small factories could be set up next to sawmills using the bark and other by-products to produce charcoal. The excess energy that is produced could be used to power the dryers at the sawmills.

Simon argues that the process could also power greenhouses or other energy-intensive business.

The entrepreneurs are in the process of patenting the pyrolysis technology and plan to bring the product to market soon.

“With a market this big, others could also benefit from the technology,” Simon says. “Our goal is to license the technology and to buy back and market the charcoal that is produced.” •