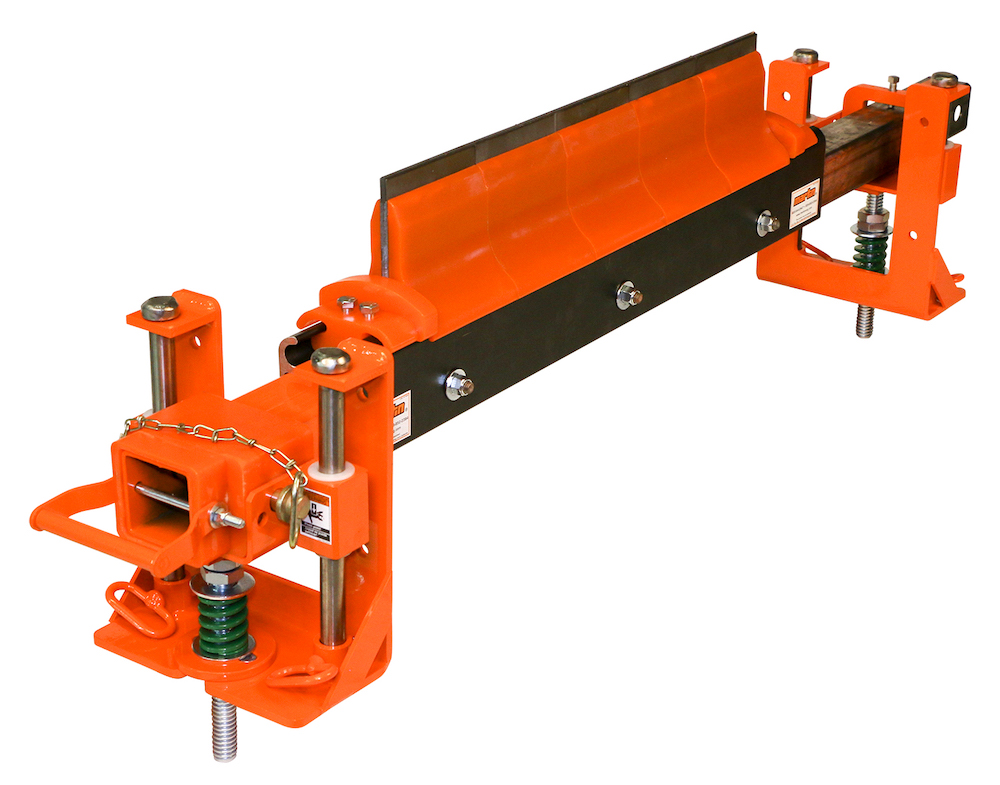 The global leader in bulk material handling technologies and training has announced the availability of two rugged secondary conveyor belt cleaners, both engineered for fast and easy maintenance. The innovative design of the DT2S and DT2H reversible cleaners from Martin Engineering reduces system downtime and labour for cleanup or service, while helping to prolong the service life of other conveyor components.

Featuring a unique split-track blade cartridge that slides in and out on a stainless steel mandrel, the cleaners can be serviced or replaced without stopping the belt when on-site safety approvals are in place. “Even when the cleaner is encrusted with material,” said Dave Mueller, conveyor products manager for Martin Engineering, “one-half of the split frame can be removed so the cartridge can be changed in just five minutes. This allows users to have a spare cartridge on hand and quickly change it out when the blades need replacement. Then they can take the used cartridge back to the shop, clean it up and change the blades so it’s ready for the next service.”

These secondary cleaners serve a wide variety of applications, ranging from mining, material processing and quarrying to cement production, food processing and other bulk material handling operations. Both products significantly reduce material carryback, and they’re engineered to accommodate reversing conveyors to avoid damage to the belt or splicing. With steel blades and tungsten carbide tips set into a flexible base, the DT2 cleaners offer simple, effective solutions that can solve a number of carryback-related problems.

Designed for particularly demanding conditions, the DT2H Reversing Cleaner XHD is suited for heavy material loads on belts ranging from 18 to 96 in (400 to 2,400 mm) wide that operate at speeds up to 1200 fpm (6.1 m/sec). Carryback accumulations along the return run of the conveyor can occur when the cleaning systems on a conveyor fail to remove most of the material that adheres to the belt after unloading its cargo. Increased buildup results in unnecessary labor costs for cleanup, and can lead to premature failure of conveyor components if left unchecked.

“Carryback can have an extremely sticky texture and abrasive nature, which can muck up conveyor components and contribute to premature failure,” Mueller explained. “One key to the success of these cleaners is the blade’s negative rake angle (less than 90 degrees). With a negative angle, you get a ‘scraping’ action that mitigates potential belt damage, while delivering outstanding cleaning performance,” he said.

Like its larger counterpart, the Martin DT2S reversing cleaner can be installed on belts ranging from 18 to 96 in (400 to 4,800 mm) wide. But unlike the DT2H, the DT2S is designed for a lower maximum belt speed of 900 fpm (4.6 m/sec) on belts with vulcanized splices. Mueller pointed out that this is primarily due to the difference in applications: “The DT2S has a slim frame that allows it to fit in spaces as narrow as 7 in (178 mm). As a result, the DT2S can be attached to belts that may be too small for primary cleaners.”

Both of the DT2 cleaners can be used in medium to heavy duty environments, providing a lasting solution to a diverse array of complex problems that are caused by carryback and minimizing fugitive material.

An example of the cleaners’ performance can be found at the Pueblo Viejo Dominicana Corporation (PVDC) mine in the province of Sanchez Ramirez, about 55 miles (89 kilometres) northwest of the city of Santo Domingo in the Dominican Republic. Operators were experiencing excessive carryback and dust on its conveyor system, resulting in expensive equipment failures, unscheduled downtime and increased maintenance. Production is 365 days a year, but between April and October moisture can cause cohesion in fine clay particles, causing the cargo to become sticky. The substance had the consistency of thick toothpaste, which was also able to adhere small chunks of aggregate to the belt, causing destructive carryback that damaged pulleys and headers.

Following the upgrades, operations are now cleaner, safer and more productive, giving executives and stakeholders more confidence in the sustained operation of the mine, which is projected to be profitable for the next 25 years or more.