November 9, 2015 - A new type of renewable diesel fuel is meeting the growing demand for renewable biofuels, which is driven by biofuel mandates and customer demands for higher quality. 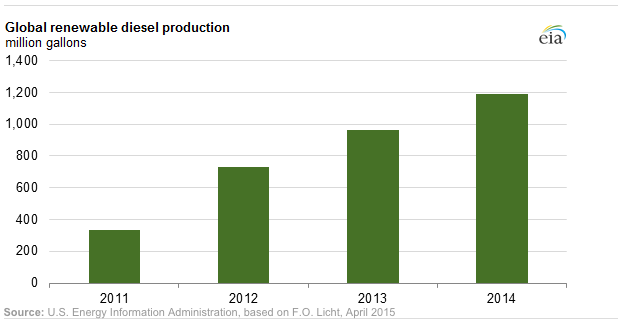 Unlike other biofuels, hydroprocessed esters and fatty acids (HEFA) fuels are nearly indistinguishable from their petroleum counterparts. Worldwide, more than a billion gallons of HEFA fuels were produced in 2014.

HEFA fuels are hydrocarbons rather than alcohols or esters. Hydrocarbons from non-petroleum sources are known as drop-in fuels because they are nearly identical to comparable petroleum-based fuels. During the refining process, the oxygen present in the alcohols and esters is removed, leaving only hydrocarbons. HEFA fuels are the most common drop-in biofuels; they can be used in diesel engines without the need for blending with petroleum diesel fuel. Currently, HEFA fuels are approved by American Society for Testing Materials (ASTM) International for use in jet engines at up to a 50 per cent blend rate with petroleum jet fuel.

The most common HEFA biofuel production to date has been a diesel replacement fuel alternately marketed as hydrotreated vegetable oil (HVO) abroad, or as renewable diesel in the United States. HEFA fuels are produced by reacting vegetable oil or animal fat with hydrogen in the presence of a catalyst. The equipment and process are very similar to the hydrotreaters used to reduce diesel sulfur levels in petroleum refineries. There are currently 10 plants worldwide that produce renewable diesel, one of which is ENI’s former petroleum refinery in Venice, Italy. Total is planning to convert its La Mede, France, refinery to HVO production, and there are four other renewable diesel projects also underway. Finnish Neste is the world’s largest producer of renewable diesel. Other major producers are Italy’s ENI, U.S.-based Diamond Green Diesel, and Swedish refiner Preem.

Beyond diesel, another outlet for HEFA fuels using similar technology is biojet fuel, which can currently be blended with petroleum jet fuel in proportions up to 50 per cent. As with any alternative jet fuel, HEFA biojet has to meet stringent specifications that ensure it will perform under a wide range of conditions. One potential consumer for this fuel is the U.S. Department of Defense, which intends to use biojet in its JP-8 jet fuel. JP-8 is a versatile fuel used in military vehicles, stationary diesel engines, and jet aircraft. This use of a common fuel simplifies logistics. There is also civilian interest in nonpetroleum jet fuel. Alaska Airlines, KLM, and United Airlines have demonstrated the use of HEFA biojet fuel on commercial flights since 2011.