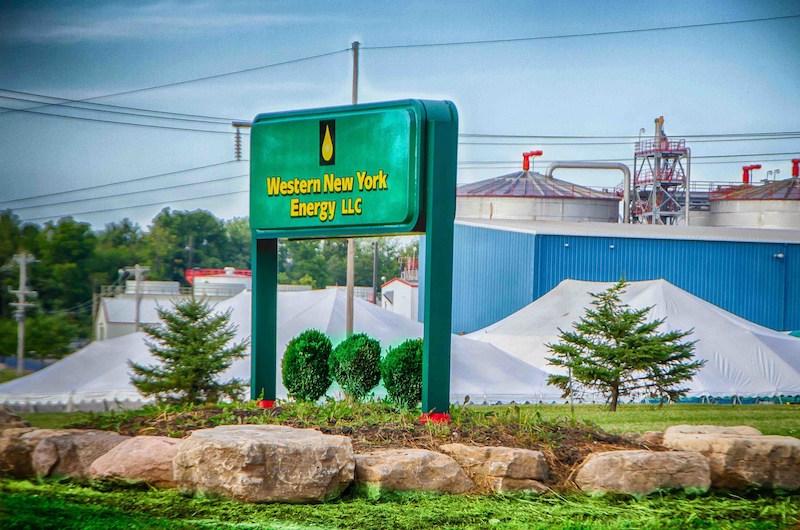 Western New York Energy (WNYE), New York’s first and largest operational ethanol facility, has adapted operations to supply distillers, manufacturing, technology, and personal care corporations across the Northeast and Canada with ethanol to produce 80 per cent antiseptic alcohol sanitizer amidst the COVID-19 pandemic. The plant is producing over 100,000 gallons a day of tech-grade ethanol for businesses that halted operations to meet the urgent sanitizer needs of hospitals and at-risk communities. WNYE generates over 60-million gallons of biofuel annually, using 20-million bushels of corn. The $90-million facility was the first biofuel company in the northeastern U.S.

Tim Winters, WNYE president and CEO, said, “Along with New York’s corn growers, WNY Energy has been proud to supply ethanol to the distilleries and companies that first responded to the alarming lack of sanitizer due to COVID-19. And while many upstream chemicals used in sanitizer products are manufactured in China, WNYE has also established a manufacturing and distribution network that will exponentially increase the production of antiseptic sanitizers made from our farmers’ corn. All the sanitizer and sanitizer products will be made in Western New York and the United States.”

We could do none of this without support from farmers, our partners for the past 13 years. Corn ethanol is the key ingredient in making 80 per cent antiseptic sanitizer. Farmers are as essential to WNYE’s operation as they are to America’s food supply – their contributions sustain this nation.”

Colleen Klein, NY Corn and Soybean Growers Association executive director, said, “WNY Energy is a respected industry partner and a critically important, reliable market for our corn growers. In usual circumstances, our crop is used in the Medina facility to make clean, renewable fuel but these are not usual circumstances. We applaud WNYE’s ability to pivot and provide needed sanitation resources while maintaining the market for our growers during uncertain times.”

Jim Whipple, Orleans County IDA CEO, said, “WNY Energy has become one of the most important industries in Orleans County and NY State. The economics tied to the operation not only support local farmers but WNYE is the largest taxpayer in Orleans County. It’s important that products made in farm communities be given purchasing priority in times like this.”

Winters and 50 employees produce ethanol 24/7 using hydroelectric power from Niagara Falls. The renewable energy reduces the GHG footprint for every gallon, earning WNYE an EP3 designation from the EPA. Gil C. Quiniones, NYPA president and CEO, said, “With virtually all WNYE’s five-megawatt electric load being met with hydropower from the Niagara Power Project. We at NYPA applaud WNYE’s ingenuity in adapting its business to fit the needs of New Yorkers during this horrific pandemic.”

Klein added, “New York farmers are going to show up to do their part -whatever it takes. We’re happy to have a friend in WNYE who shares this mentality. Whether you’re farm tough, New York City tough, or anywhere in between – we’re all stronger together.”