February 11, 2016 - An opportunity lost can often become an opportunity gained, especially when the right minds collaborate on a solution. 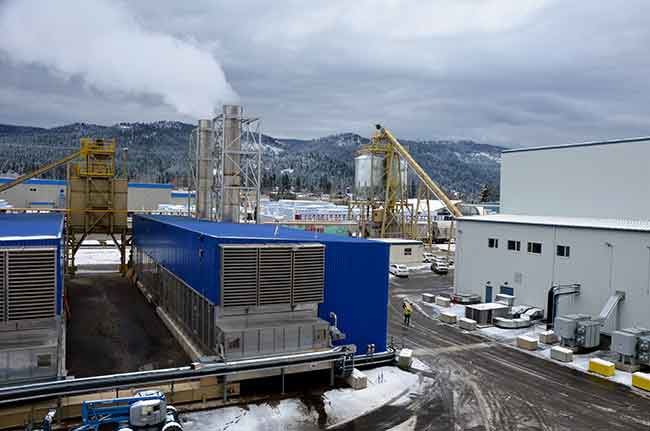 Pinnacle conveys residues directly from the adjacent Tolko sawmill for use in pellet production. An opportunity lost can often become an opportunity gained

With the closure of Domtar’s sawmill digester in Kamloops in 2013, a large surplus of sawmill fibre was created in the Okanagan region of the B.C. interior. No longer was there an economically and environmentally viable use for the massive tonnage of residuals being created. A new solution for the fibre was desperately needed.

Enter Pinnacle Renewable Energy Inc., Canada’s largest wood pellet producer. Pinnacle recognized the situation that had been created, and clearly, the production of wood pellets using all of the available fibre was an attractive option that met both the economic and environmental needs for the residues.

While exploring the opportunity for pellet production using the fibre resources, Pinnacle recognized a natural partner they could work with in the region. Tolko Industries is firmly established in the Okanagan region, with several sawmills.

In discussions with Tolko, it was discovered that the optimal logistics equation was created by positioning the project adjacent to Tolko’s Lavington sawmill, located just 15km east of Vernon. The additional acreage would be enough to house a full pellet plant based on the size of operation that the collective wisdom determined to be the best fit for the region, and had the prerequisite rail access to the port of Vancouver through CN.

In January 2015, following months of deliberation with community groups and permitting approval from the Ministry of Environment and District of Coldstream, Pinnacle and Tolko officially announced that they were proceeding with the construction of the plant.

The partnership involves a 75-25 split between Pinnacle and Tolko respectively.

“Tolko is the largest fibre supplier to the project, therefore it only made sense for them to participate in the economics associated with the project,” says Scott Bax, senior vice-president of operations for Pinnacle. “They are a highly professional, well-run organization who are also a source of a large percentage of the raw material, so the opportunity to work together was a natural fit.”

Bax estimates that upwards of 30 per cent of the overall fibre to be used at the Lavington Pellet Limited Partnership plant is supplied by the Tolko mill next door. The remaining fibre is sourced from throughout the Thompson Okanagan Region of B.C., which encompasses an approximate radius of 150km.

Doing things differently
With six pellet plants throughout B.C. (Lavington is the seventh), Pinnacle has learned many lessons on how to optimize pellet production. At Lavington, the company worked to incorporate new features in its mill design, setting new standards for critical elements like dust control, emissions, noise reduction and site safety.

While no scientific measurements were being recorded in the community of Lavington at the time of initial project proposal, the area was assessed by the British Columbia Ministry of Environment as being near or potentially exceeding one of the three provincial air quality objectives that related specifically to the annual average PM2.5 concentration. Given this situation, a joint strategy was developed to upgrade the emission control equipment associated with the existing Tolko Lavington planer mill as part of the integration of pellet plant into the overall operation. In November of 2015, the first round of emission testing was completed by an independent third party with the results demonstrating an 83 per cent reduction from the previously existing permitted emissions. “This project has been a great success on many fronts, with respect to the emission test results, we are pleased to provide scientific evidence affirming a dramatic improvement in the local air quality to those local residents who expressed concerns about the project,” said Leroy Reitsma, president and COO of Pinnacle Renewable Energy Inc.

The Lavington plant represents the first use of two new technologies to improve the emissions from pellet production. First, the plant has incorporated the use of low temperature, low emissions bed dryers. These dryers use a significantly reduced temperature in combination with higher airflows to remove more moisture from the fibre than typical rotary dryers. Secondly, the company has introduced cyclofilter technology that reduces the amount of fine particulate emissions associated with both pneumatic conveyance and pellet cooling.

Areas of potential fugitive dust emissions and noise generation were also closely scrutinized. The result is a safer work environment that features the enclosure of all processing equipment, a fully enclosed conveyance system, primary fibre storage in tent enclosures, paved road and plant surfaces, a treed perimeter, and a full enclosed truck tipping system. All of this was achieved while engineering in the ability to remove panels and create access for safe entry and maintenance.

Pinnacle conveys residues directly from the adjacent Tolko sawmill for use in pellet production.

The mill profile
Trucks enter the mill through a two-lane access road on the western side of the property. The trucks travel to the far end of the property to the weigh scale before proceeding to the truck dumper. The dumper is situated between the Megadome shavings and sawdust tents, which house both wet and dry fibre.

Regardless of whether the fibre is obtained by truck or conveyed from the Tolko sawmill next door, the fibre is separated by fibre type, shavings and sawdust, and conveyed into the appropriate storage tent. A system of conveyors from Continental Conveyors move the fibre throughout the plant, including from the storage domes to the bed dryers, supplied by Stela Luxhuber of Germany. The belt dryers dry at a temperature of around 100C as compared to a rotary dryer, which has a typically inlet temperature of around 500C.

Both the pellet plant pneumatic system, and the upgrades to the Tolko Lavington fibre delivery system, is supplied by Airtek Pneumatics in Kelowna. The systems were installed to NFPA standards, in accordance with B.C. regulations. Sub-suppliers including Rodrigué Metal who manufacture the cyclofilter technology, Northern Blower who provided the industrial fans, Baum Pneumatics who supplied the airlocks and Clarke’s Sheet Metal Inc. who supplied the abort gate and backdraft dampers.

The hammermills were supplied by Bliss Industries, which reduce the particle size of the material prior to the seven Andritz pelletizers, which extrude a small, sleek wood pellet that can be sold to both domestic and international markets.

The site provides limited pellet storage, however, the two 100-ton storage silos are situated directly over the train tracks for efficient transfer to a series of railcars ready on site. Once the cars are loaded, the pellets travel just over 300km to Fibreco, where they are accumulated in advance of shipment.

Efficient construction
Pinnacle began construction of the Lavington mill in early February of 2015 following a design review with WorkSafeBC, a first for the pellet industry in B.C. With the organization’s feedback, construction of the mill was done quickly and efficiently, with just nine months from groundbreaking to the first batch of pellets produced. The project was completed with no lost time due to injury, on time and under budget.

The business case was based on a 12-month ramp up to 700 tonnes per day equating to annual production volume of approximately 260,000 tonnes. During the commissioning phase in October and November, the plant exceeded expectation with several days above the business case capacity.  However, the company is quick to recognize that winter conditions will challenge the plant in the coming months.

While the 260,000 tonnes per year production is in line with current fibre availability in the region, the company has built the plant with the capacity to add equipment for increased production. Based on the construction, Pinnacle is in a position to add a hammermill, two pelletizers and a baghouse.

The Lavington mill has provided a valuable addition to the forest industry in the Okanagan Region, giving mill operators a home for residues from lumber production. And in the process, the company has set a new standard for dust and emissions control in Canadian wood pellet production.