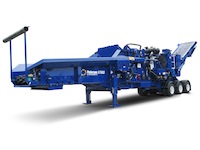 With a feed opening of 66 x 50 inches (168 x 127 cm), the
6700D can even process large stumps that used to be reserved for tub grinders.
The grinder is particularly suited for land clearing operations or other
applications where mobility is desired.

With the R+ package, the 6700D can be configured as a
mid-speed grinder to handle heavily contaminated piles, or a high-speed grinder
for typical land clearing operations. Peterson’s three-stage grinding process
with an up turning rotor and large grate area enables the 6700D to produce
materials to exact specifications. Our quick-change multiple grate system makes
it easy to customize grate configurations to produce a wide variety of finished
materials. Grates are removed through an enlarged access door on the side wall
of the 6700D.

The 6700D features Peterson’s Adaptive Control System, which
controls all components of the feed system to optimize output. This system
monitors the grinding load and varies the speed of the feed system to keep the
engine working at the top of its power curve. It automatically accelerates the
feed system when the engine load is light, slows when the load is high, and
reverses if the engine speed drops. It even monitors the engine temperature and
varies the cooling fan speed to minimize power usage and reduce fuel
consumption.

Unique to Peterson Grinders is our innovative latching
Impact Release System, which minimizes damage from contaminants in the feed
material. The anvil and first grate open on a severe impact, allowing the
contaminant to be ejected, and then re-latch to permit continuous grinding.