March 28, 2016 - Woody debris in forests of temperate and boreal ecological zones is created by natural (wildfire and insect outbreaks) and harvesting (logging) disturbances. Salvage logging and clearcutting often leave much woody debris after the processing of trees. A major “perception” of our utilitarian outlook is to define excess woody debris as “wood waste,” particularly the residue (slash) occurring after conventional and salvage harvesting of forests. 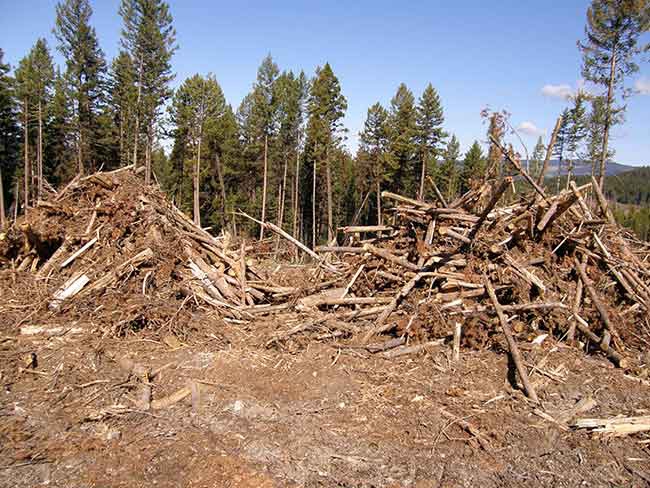 Down wood provides many ecological functions essential to the maintenance of forest biodiversity and long-term productivity. Sufficient down wood is usually dispersed over harvested sites during the logging operation, thereby leaving piles of post-harvest debris as “excess” material at landings. These wood residues are typically burned in B.C. and most other provinces to reduce a perceived fire hazard. However, use of woody debris for bio-energy is an alternative management scenario and a potential major contributor to a reduction in use of fossil fuels – a  desirable environmental goal. In terms of perceived fire hazard, there is no scientific evidence showing that piles and/or windrows of woody debris are ignition points for forest fires, other than those caused by humans.

The intentional burning of excess woody debris creates much smoke that releases greenhouse gas (GHG) emissions and may also create a potential human health concern in nearby communities. The relationship of wildfire smoke to human health problems is well-documented. There seems to be no reason to consider the smoke arising from the burning of debris piles as a different issue.

Woody debris structures may provide foraging, perching, nesting, and denning sites for a variety of mammals, birds, amphibians, and lizards, as well as space for plants and fungi as these structures become part of the new forest growing on the harvested site. A windrow or series of piles may connect patches of mature forest and riparian areas to allow small mammals and some of their predators to access and traverse clear-cut openings. This practice is particularly relevant on large openings (>10 ha) in conventional, but also larger (>100 ha) salvage harvesting operations.

In terms of mammalian biodiversity, diversity of small mammals was highest in the windrow sites at both study areas. A valuation of mammalian biodiversity has indicated at least five components that may potentially generate some monetary revenue by constructing windrow habitats on clear-cuts. These components include: commercial fur harvest of marten, small weasels, and other fur-bearers;  enhancement of predators to help lower vole numbers and protect plantation trees from vole feeding damage; small mammals disseminate mycorrhizal fungi that are essential components for tree and plant growth; consumption of invertebrates by small mammals (including rodents and shrews) may help control some insect populations such as spruce beetle; and dissemination and caching of seeds in safe sites by small mammals may be important for forest regeneration. Windrow construction will be site- and cutblock-specific with windrows connecting patches of uncut forest to forest reserves and riparian areas. They are not required on every cutblock, and generally use only 10 to 15 per cent of excess post-harvest woody debris.

Production of wood pellets is, indeed, a worthwhile endeavour and likely dependent on size of pellet production plant and distance to haul wood chips from the various harvested sites to the plant. Bioenergy is a renewable enterprise that results in reduced use of fossil fuels. This can result in a reduction in carbon emissions – a widely supported environmental goal. In addition, biomass sources in this study were from harvest residues rather than removal of whole trees. Perhaps the most cost-revealing part of our analysis was the negative human and environmental costs of burning piles of wood waste.

Policies regulating “utilization and disposal of waste wood piles” need to be revised as soon as possible to:

Thomas Sullivan is a professor of wildlife ecology and conservation, food and environment – Faculty of Land and Food Systems, Dept. of Forest and Conservation Sciences – Faculty of Forestry at the University of British Columbia. He can be reached at tomsu@mail.ubc.ca.