Feb. 11, 2019 - A University of Saskatchewan research team’s quest to extract protein from more than a billion litres of annually produced wastewater (called thin stillage) at Saskatchewan’s ethanol plants has yielded something far more valuable – a compound used in many countries to slow cognition loss in Alzheimer patients. 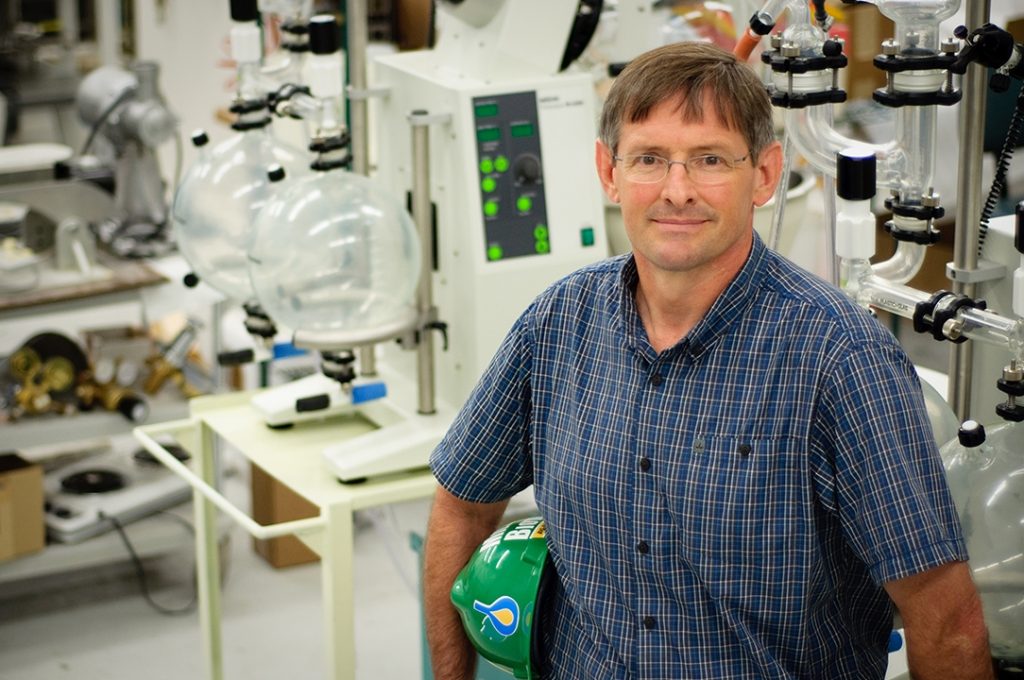 That compound is glyceryl phosphoryl choline (GPC) which is sold as a pharmaceutical drug (choline alfoscerate) for Alzheimer patients in Korea, Russia and some eastern European and South American countries, and as a cognition enhancer (nootropic) in North America.

GPC helps the body increase production of acetylcholine, the basic neurotransmitter that signals messages to cells and plays an important role in mental processes such as memory and cognition. GPC has also shown positive effects on athletic performance and recovery from heart attack and stroke.

The researchers have also discovered that stillage contains other commercially useful compounds, including 1,3-propanediol (1,3-PD) that is a non-toxic antifreeze and solvent, as well as a component of polymers used to make plastics and resins.

“We are essentially aiming to make clinically and commercially useful products from thin stillage that’s now used as animal feed,” said Dr. Martin Reaney (PhD), a USask professor in the College of Agriculture and Bioresources who led the research team. “These products could be more valuable than the ethanol from the processing plants.”

Reaney has been awarded an Engage Grant by the federal agency NSERC for a collaborative project with a Saskatoon company to scale up production and refine the stillage GPC to a clinical-quality product.

“The idea is to take a multi-front approach to feeding the brain of Alzheimer’s patients by coupling together GPC and other brain-enhancing compounds,” said Reaney, the Saskatchewan Ministry of Agriculture Strategic Research Chair and Chair of Lipid Quality Utilization at USask, whose specialty is oilseeds and processing.

The design of a cost-effective method to produce pure GPC suitable for clinical use is the latest development in the research team’s surprising discovery of GPC in thin stillage nearly a decade ago.

“At first we didn’t think it was worth going after the GPC. There were fewer studies back then on the clinical effects of GPC on cognition,” said Reaney.

GPC on the market today is made from lecithin in eggs and by refining soy, Reaney said. The team’s discovery is an opportunity to make GPC from an entirely vegetable-based source without using lecithin.

Reaney is working with North West Terminals Ltd. in Unity, SK, Pound-Maker Agventures in Lanigan, SK, and Terra Grain Fuels in Belle Plaine, SK. on research to use stillage to produce concentrated protein for use in animal feed and products such as GPC and 1,3-PD.

Terra Grain Fuels is the largest wheat ethanol plant in North America, producing 150 million litres of ethanol a year. The other plants produce a combined 40 million litres. The volume of thin stillage left by the process is six to 10 times the amount of ethanol produced – as much as two billion litres a year.

Reaney estimates that the Terra Grain plant alone could supply enough GPC to provide 2.5 billion, 600-milligram doses a year. Projections suggest that by 2050, there could be as many as 15 million people with Alzheimer’s Disease in the U.S. and Canada.