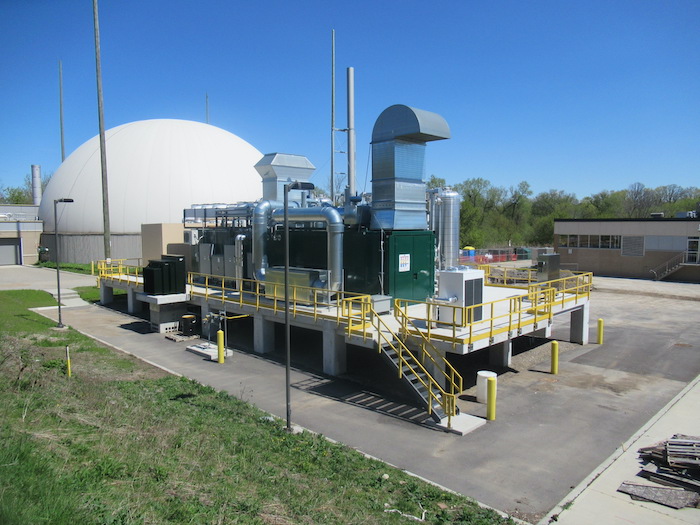 A consulting engineering firm behind the Regional Municipality of Waterloo’s project to install cogeneration facilities at three of its wastewater treatment plants in Ontario has won a national award.

Jacobs received an Award of Excellence in the Natural Resources, Mining, Industry and Energy category for the cogeneration project.

The regional municipality operates several conventional wastewater treatment plants (WWTPs) that produce digester gas as waste byproduct. Jacobs, along with teammates CIMA+ and Eramosa Engineering, led design and services during construction for the installation of cogeneration facilities at the region’s three largest WWTPs in Waterloo, Kitchener and Galt, Ont.

These facilities combust the digester gas to produce electricity and heat. The resulting energy is used on-site, thereby reducing carbon dioxide (CO2) emissions and the cost of externally provided electricity and natural gas.

Jacobs completed the following scope of work for all three sites:

The engineers at Jacobs used innovative technologies to deliver an environmentally significant project that aligned with the region’s goals to become a sustainable community, as outlined in its greenhouse gas (GHG) inventory and action plan, which included a 10 per cent reduction of 2009 emission levels by the year 2019. (While this project was completed after 2019, it exemplifies continuing improvement by the region to optimize the use of renewable energy resources.) The economic feasibility of this project depended on government and utility incentive programs.

The pre-purchasing process allowed the Jacobs team and the region to develop emission and efficiency goals for the cogeneration engines and put them out for tender. The successful bidder was GAL Power, a vendor that supplied the combined heat and power (CHP) units from Germany; biogas use is much more common in Europe than in North America.

Jacobs’ practical and innovative design offered both economic and environmental benefits to the region and its residents, including the offsetting of electricity costs for the sites and the reduction of GHG emissions. By way of example, if digester gas production at a site is low or unavailable, the cogeneration facilities have the capability to run on natural gas or a blend of natural gas and digester gas.

One size does not fit all

The Jacobs team worked with W.A. Stephenson Mechanical Contractors during construction to manage the schedule and budget. In-house project management tools were used to ensure all milestones were met.

The project had a high level of complexity, as the three sites entailed different existing conditions, which had to be evaluated in the approval and conceptual design phases, so the detailed design would provide a constructable and cost-effective solution for all of the sites. The structures involved had to be flood-proof, for example, due to their proximity to watercourses; and the gas quality and quantity varied, which needed to be considered from a process perspective to size the generator engines appropriately and obtain Technical Standards and Safety Authority (TSSA) digester gas installation approvals.

The firm worked closely with the contractor to ensure construction proceeded on schedule, so the project would meet its funding deadlines. Photo courtesy Jacobs.

Construction management was also complicated due to the different parties involved. Each of the three sites had its own operational staff and operated under a different natural gas authorities and electrical local distribution company (LDC). Hurdles were overcome through diligent and frequent communications within the team and with various project stakeholders.

Another challenge was delivering the project in time, to meet deadlines set by the provincial and federal governments for the region to secure project funding. Due to the global pandemic, equipment and material deliveries were delayed. This challenge was overcome through proactive actions taken by the project team – including the region, Jacobs, the contractor and suppliers – to identify and secure critical path items.

The Galt and Waterloo WWTPs’ cogeneration facilities each generate 600 kilowatt-electric (kWe) capacity, which delivers more than 33 per cent of their respective electrical loads, while the Kitchener facility generates 800 kWe, more than 70 per cent of its load.

The generated heat is transferred to the plants’ hot water systems. It is then used to heat the buildings and digester sludge, reducing the natural gas load to the boilers.

When the cogeneration facilities are running 100 per cent on biogas, the reduction of GHG emissions compared to pre-construction levels is equivalent to 934 tonnes of CO2 for Waterloo, 425 tonnes for Kitchener and 554 tonnes for Galt, annually.

Additionally, the cogeneration facilities include gas conditioning upstream of the engine generators and exhaust treatment equipment downstream. Before the blend of digester gas and natural gas is combusted in the engine generator, it is dried, filtered and cooled by the gas conditioning system to remove constituents that may hinder the efficiency or reliability of the combustion process. Similarly, exhaust from the generator engine is treated with urea to lower the concentration of harmful constituents emitted to the atmosphere.

This article was originally published by Canadian Consulting Engineer here. Republished with permission.