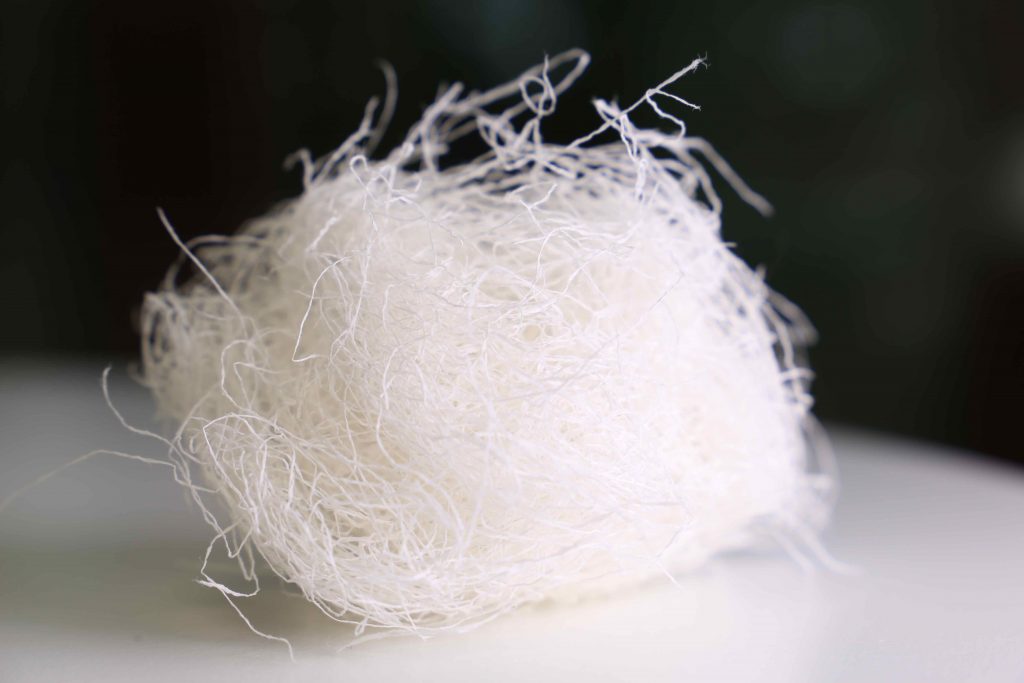 Research scientists turned cellulose yarn into a material that can capture hormones and other pharmaceutical substances effectively. The surface of the yarn is coated with a cyclic sugar that captures the compounds into the cavities of the fibre as it swells in water. Photo by VTT.

Hormones and other pharmaceuticals ending up in bodies from natural waters are a globally significant environmental problem. VTT Technical Research Centre of Finland and Aalto University have developed a wood-based cellulose fibre yarn that is an affordable solution for capturing pharmaceutical substances – especially ethinylestradiol in contraceptive pills – that would otherwise end up in bodies of water.

Hormone capture would be most effective in wastewater treatment plants and hospitals, since the wastewater in these facilities contains a higher concentration of the compounds. We are developing a wood-based affordable material that could be thrown into a tank in a wastewater treatment plant or used as a filter in a pipe connected to the tank. After some time, the material is collected mechanically. It is disposed of by incineration, but it is also possible to separate the pharmaceuticals and reuse the material, describes VTT’s Senior Scientist Hannes Orelma.

By attaching a cyclic sugar onto the surface of the cellulose fibre yarn, the research scientists were able to create a material that efficiently captures ethinylestradiol (EE2), a hormone used in contraceptive pills. The cyclic sugars are bonded chemically onto the surface of the yarn. The sugars form a pocket into which hydrophobic pharmaceutical substances seek to enter. This way, it only takes a few minutes for pharmaceutical compounds to become bound to the cyclodextrins coupled to the surfaces and cavities of the fibre. Test results demonstrate that one gram of fibre yarn can capture approximately 2.5 milligrams of the hormone.

The development effort used wood-pulp-based fibre yarn that was manufactured using deep eutectic solvents (DES) in a method developed by VTT. DESes represent a new generation of organic solvents, some of which can be environmentally very friendly. This research used an environmentally friendly DES.

– It would be interesting to test how effectively the cellulose yarns can capture hormones and pharmaceuticals from wastewater at a larger scale, states Orelma.

VTT has patented the method and tested it at laboratory scale. The research results were published in BioMacromolecules in 2018.

Hormones and other pharmaceutical agents ending up in bodies of water are a major problem in Central Europe and the United States, where the reported concentrations of oestrogen hormones have reached up to 0.83 micrograms per litre. These hormones are called endocrine disruptors, since they affect the gender of fish and turn male fish into females. The EU has identified pharmaceuticals in waters as a challenging problem, since wastewater treatment plants cannot capture the substances efficiently enough. At present, wastewater treatment plants capture pharmaceuticals by means of activated sludge tanks, but a portion of the compounds nevertheless escape the tanks and end up in bodies of water.

The development of the material started in 2015 as a collaborative effort between VTT and Aalto University. The development was funded by Tekes (currently known as Business Finland) under the Design Driven Value Chains in the World of Cellulose II project. At present, the design and development of the material is supported by the Academy of Finland and proceeds in the FinnCERES Materials Cluster that develops entirely new kinds of biomaterials. Clean air and water is one of the key research themes of FinnCERES.