October 8, 2015 - The top five export destinations for Canadian wood pellets in 2014 were United Kingdom, United States, Italy, South Korea, and Japan. However, in the spring of 2015, South Korea took itself off this list by imposing new wood pellet import restrictions. The result was that Canadian producers could not legally comply with South Korea’s new requirements and pellet exports from Canada to South Korea all but dried up. 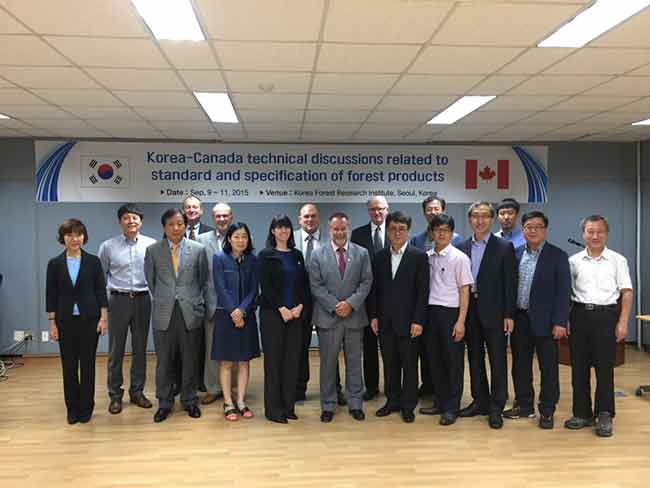 The delegates in the Canada-Korea forest products standards discussions. The top five export destinations for Canadian wood pellets in 2014 were United Kingdom

South Korea’s objectives were to ensure that the raw material used to make pellets were legally sourced and comprised of pure wood fibre. The country had been receiving imported wood pellets that were contaminated with refuse (contaminated waste matter), and wanted to prevent air pollution from such waste matter.

To meet its objectives, the South Korean government implemented new requirements for pellet exporters to provide copies of government-issued tenure documents for all fibre sources in each wood pellet shipment, as well as copies of fibre purchase contracts. All documents were to be authenticated by the exporting country’s government as per an international treaty known as the Apostille Convention – an international certification comparable to notarization in domestic law. Canadian producers not only found this process unreasonably onerous; they could not legally comply because Canada is not a member of the Apostille Convention.

Wood pellet exports slowed to a trickle. A few Canadian containers continued to slip into South Korea when some exporters found the Korean embassy in Vancouver willing to accept unauthenticated documents.

A second issue arose in the spring of 2015 when South Korea issued a notice regarding national forest products standards – including wood pellet standards – to the Technical Barriers to Trade Committee of the World Trade Organization. Under the notification process, the Wood Pellet Association of Canada (WPAC) reviewed the South Korean standards and found that neither the wood pellet grades, nor the physical and chemical testing procedures, aligned with the international standards developed by ISO.

To address these issues, WPAC asked for help from Canada’s Department of Foreign Affairs and Trade Development (DFATD), Natural Resources Canada (NRCAN), and the BC Ministry of International Trade (BCMIT). All three organizations responded immediately, vigorously and with the highest degree of professionalism.

The organizations managing these issues on behalf of the Government of South Korea include Korea Forest Service (KFS), Korea Forest Promotion Institute (KOFPI), and Korea Forest Research Institute (KFRI). From June to September, despite two face-to-face meetings in Seoul, a web conference, and several letters (including a letter from Canada’s trade minister, The Honourable Ed Fast), Canada seemingly made little progress in convincing South Korea to move on either the import restrictions or the wood pellet standards.

Meanwhile, like the pellet sector, the sawn lumber and engineered wood sectors were experiencing similar trade issues. DFATD and NRCAN arranged for another
round of meetings to take place from September 9 to 11 in Seoul. The Canadian delegation included representatives from DFATD, NRCAN, WPAC, the Council of Forest Industries, the Engineered Wood Association (APA), the National Lumber Grades Authority, and the Canadian Lumber Grades Accreditation Board. The Korean delegation included representatives from KFS, KFPI, and KFRI.

We are pleased with the results of the recent meetings and optimistic that Canada will be able to re-establish a mutually beneficial wood pellet trade with South Korea.

WPAC would like to express special thanks to NRCAN’s Wendy Vasbinder, Robert Jones, Lesley-Ann Reed and Hyun-Mi Park of the Canadian Embassy and to BCMIT’s Jae-Jung Huh. •