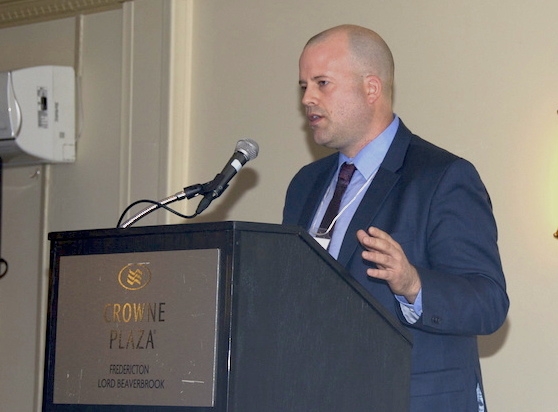 This ironic image dominated conversation at the NB Wood Pellet Forum held by the Wood Pellet Association of Canada and Canadian Biomass in Fredericton today.

“It seems crazy that we are using the Port of Belledune to ship wood pellets to Europe, and the same port to bring in coal. Why not keep those wood pellets here?” WPAC executive director Gord Murray asked the audience of about 75 stakeholders, ranging from consultants and pellet producers to government and NB Power representatives.

New Brunswick has four pellet plants in operation with two others in the planning stages and the potential for many more, Murray said. The two largest, Groupe Savoie and Shaw Resources, produce 90,000 and 100,000 tonnes per year respectively, but a majority of what is produced is sent to the U.K. and Western Europe.

This year the federal government announced its intention to phase out coal-fired electricity Canada wide. New Brunswick is one of four provinces that still produce electricity with coal.

The Belledune Generating Station was built just 23 years ago. “It would become the classic stranded asset if it was shut down. It has many more years left,” FutureMetrics’ William Strauss told the crowd. A solution to avoid shut down is to either co-fire with pellets, or to retrofit the station to full-fire wood pellets.

Belledune would require approximately 1.6 million tonnes of pellets a year to run, Strauss said. There is no denying that wood pellets are more expensive to produce than coal, he said, so government policy needs to close the gap. “It is without question the lowest cost method to reduce GHG emissions.”

A vibrant pellet industry would also create jobs in the province, stimulating the local economy, Strauss said. He estimates about 2,700 jobs would be required to supply wood pellets to Belledune. Imported coal, by comparison, has no local economic benefit.

According to stats shared by Murray, about 45 per cent of New Brunswick homes use primarily electricity for heating, and another 25 per cent use oil. Just four per cent of homes in the province use wood pellets.

“New Brunswick has a surplus of sawdust, bark and wood chips from its forestry sector,” Jonathan Levesque, vice-president of sales and development for Groupe Savoie, told the crowd. Electricity is the most expensive and least efficient fuel, but it’s the cheapest initial cost.

“We need a solution for this biomass surplus. We need to stop heating with electricity,” Levesque said.

Speaking from the audience, NB Power’s Keith Cronkhite said the utility is not a barrier to the conversation of using wood pellets in the province. “We are acutely aware that having the right price is essential for us to compete. We would love to see a vibrant wood pellet industry. I want to make sure that we are taking that holistic view to ensure we are sustainable going forward,” Cronkhite said.