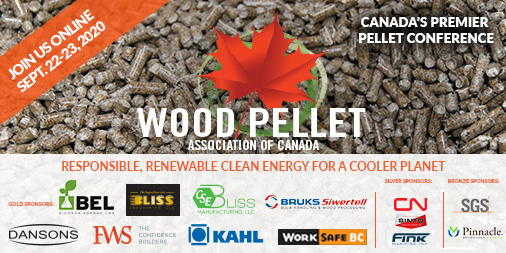 Vaughan Bassett opened this year’s Wood Pellet Association of Canada’s Conference and Annual General Meeting with a reminder of how extraordinary and challenging 2020 has been.

“We had to really lift our game this year to deal with COVID-19 restrictions and practices, rail disruptions, fires blazing out of control to our south, more hurricanes than we actually had alphabet to name, export terminal challenges – and it’s only September,” said Bassett, president of WPAC and a senior vice-president at Pinnacle Renewable Energy.

The conference, held virtually because of the pandemic, ran from Sept. 22 to Sept. 24. It attracted nearly 500 professionals from across North America and around the world.

“But if I know anything, it’s that we are a resilient bunch,” Bassett said. “We have weathered significant challenges in the past and have done so successfully. I’ve always maintained that we are stronger together. Now, perhaps we should unite more than ever to beat back these headwinds and emerge even stronger.”

Climate change too expensive to ignore

Climate change was a major focus of this year’s event, with WPAC embracing its new tagline of “Responsible, Renewable Clean Energy.”

William Strauss, the president and founder of FutureMetrics, said the problem of carbon dioxide emissions is simply too expensive to ignore.

Strauss cast a spotlight on coal-fired power plants, pointing out there are still 5,026 plants operating around the globe with capacities of 100 megawatts or more. The U.S. alone has 482 such plants, representing 241,000 megawatts of capacity. And a good number of those plants are less than 12 years old, he said.

He expects to see increased demand for co-firing, using wood pellets to replace some coal, or perhaps even full conversions away from coal to pellets in some cases. Wood pellets have 85 per cent less carbon footprint than coal when creating energy, taking into account the supply chain, he said.

“If policy evolves as it should, industrial wood pellets will be a critical part of the solution,” said Strauss.

Turning waste into a solution

Jason Fisher, vice-president of strategic partnerships and corporate responsibility at Pinnacle Renewable Energy, continued the green message in his presentation. For him, it’s a simple fact of the industry: “We turn local waste into a global solution,” he said.

Before the wood pellet industry took off, there was massive waste at wood-related operations – piles of sawdust and shavings that were accumulating at mills that were seen as a nuisance and often burned in beehive burners or in piles.

“In 2003, a serious effort was made to get rid of those burners in British Columbia,” he said, adding that it wasn’t just about getting rid of waste on the ground but also getting the waste out of the air.

Pellets also have an advantage over other renewable fuel types, because they’re efficient to ship, easy to handle and have predictable performance.

But it’s also important to recognize that wood pellets alone are not the solution, he said. Instead, they will work hand-in-hand in allowing the adoption of more solar and wind energy by providing a responsive and firm renewable energy source, he said. Simply put, wood pellets can provide energy at any time, not just when the sun is shining or the wind is blowing.

“Climate change – it’s coming and it’s getting worse,” said Fisher. “It’s already here and it’s not something we can put off addressing to a later date.”

Fisher also talked about increasing Indigenous engagement in the industry, pointing out that there is a huge population that is “ready and able and wanting to be more engaged” in the forest sector.

“I think that the values that underpin our sector align very well with the notions of good management and using the resources that are there to their best advantage and providing jobs and opportunities where people live and leaving the forest better than they were found,” he said.

Jamie Stephen, founder and managing director of Torchlight Bioresources, pointed out that Canada has a long way to go to hit its environmental commitments under the 2030 Paris Agreement. About 230 million tons, to be specific.

“We’re not going to eliminate all greenhouse gas emissions – so that means we do need negative emissions,” he said. “This means we’re actually removing carbon dioxide from the atmosphere in order to offset the place that we still have emissions.”

Stephen talked about bioenergy carbon capture and storage (BECCS) technology as a key way to achieve negative emissions. Essentially, it allows carbon dioxide to be stored underground, keeping it from the air and resulting in negative CO2 emissions.

Bassett concluded the conference by expressing optimism about the industry. There is a growing movement in some nations around ensuring pellets are produced sustainability – particularly in Japan, a large importer – and Canada is well positioned to prove its forests and pellets are properly managed and harvested.

This will level the playing field for Canadian producers, he said, and also demonstrate a commitment from governments to biomass.

He called the event the “inaugural and hopefully also our final virtual conference” for WPAC.

“I say hopefully final because I would like to believe that next year we will be back to normal,” said Bassett. “At least, that is my hope, as I’m sure it is all of yours too.”

All of the sessions from the 2020 WPAC Conference and AGM are available on-demand. This includes both the live sessions and a library of additional presentations.

All of the sessions are available for free. Go to www.canadianbiomassmagazine.ca/virtual-events/wpac-conference-agm-day-1/ to register and view the sessions.