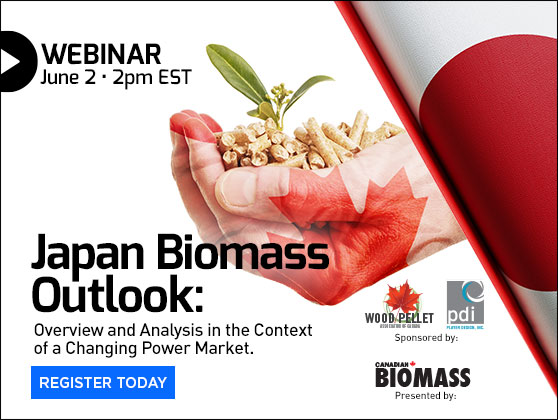 After the 2011 earthquake and disaster at the Fukishima nuclear plant, or “Higashi Nihon Daishinsai,” Japan had to look for alternative sources of sustainable fuel and heating, such as wood pellets, chips and palm kernel shells (PKS). As the world’s largest market for these materials, Japan represents a big opportunity for the bioeconomy.

To better understand the Japanese biomass market outlook and the opportunities it presents, on June 2, Canadian Biomass and the Wood Pellet Association of Canada (WPAC) presented a free webinar in partnership with FutureMetrics, sponsored by Player Design Inc., on Japan’s ongoing expected growth in the biomass power market.

As old coal plants are phased out in Japan, the use of wood pellets, chips and PKS in co-firing plants is expected to continue increasing, Bossler explained. Construction of new dedicated biomass power plants across Japan is also expected to increase.

The first Japanese power plants using 100 per cent wood pellet fuel are expected to come online in the coming years, which means demand for wood pellets will increase.

“Wood chips are here to stay,” Bossler added, thanks to high demand for the materials from other industries, including the paper industry and particle/MDF manufacturing sector.

However, the number of 100 per cent PKS-fueled plants are decreasing because of sustainability challenges, Bossler explained.

In response to an attendee’s question about the demand for black pellets in Japan, Bossler explained that suppliers with large pellet plants “would probably find a lot of interest with utilities that would want to switch, such as coal plants.

“Based on communications that we’ve had with different Japanese entities, they are very interested because you could pile them outside like you could pile up coal,” she said. “I think that if there is a company that is ready to go, they will find very open doors in Japan.”

When it comes to biomass power, there is a strong market in Japan, said Bossler.

“These nuclear power plants will not go back online. The government is pushing utilities to use their infrastructure for other generation sources.”

Japan released efficiency requirements for thermal power generation plants in 2016. Although these requirements are not strictly binding, this government plan was put in place to help increase plant productivity. Under these requirements, it is recommended that all new coal-fired power plants’ heat efficiency be at least 42 per cent, with a target of 44.3 per cent by 2030 (equivalent to so-called ultra-super-critical plants or the most advanced technology available for commercial operation), Bossler explained.

Plants not meeting that threshold are encouraged to gradually ramp down operations. The targets are not binding at this time, but the assumption is that most operators plan to comply, Bossler said.

“If we are on the conservative side and we look at the biomass power plant pipeline and some of the co-firing pipeline, we are projecting that by 2025 you could look at nine million megatonnes (MT) annually of pellet supply into Japan,” said Bossler.

Although at its current state, PKS is a well sought-after source for fuel, “we are projecting it to go down,” she said. “This is with the assumption the sustainability requirements may not be as strictly enforced as of what it looked like in December.”

PKS was first imported into Japan in 2009, when it first became clear that the waste product could be used as fuel. The demand has been going up ever since; however, supply of PKS fuel is impacted by the production of palm oil, which has been affected by the ongoing COVID-19 pandemic.

In these first two scenarios, significant demand growth will be seen for industrial wood pellets but not for wood chips because wood chips have a higher moisture content and lower energy density, as well as cost.

Bossler said the third scenario is the most realistic of the three. Many of the sub-critical and super-critical plants in Japan are old and are expected to be phased out by 2030. This means total utility coal generation capacity will drop from 27.8 gigawatts (GW) to 21.3 GWs.

“So, if we say the old plants are really being phased out, but the remaining ones move to a three per cent co-firing of pellets, you are still looking at 5.7-million tonnes [of wood pellets needed] per year by 2025.”

If plants that are currently more than 30 years old are assumed to shut down by 2030, then the total utility coal generation capacity will drop from about 27.8 GW to about 21.3 GW.

The power market in Japan has been changing significantly since 2011, and although the power market reform will soon come to its conclusion, Bossler believes that there will be changes happening within sustainability questions and more. “It’s a market that you have to watch,” she said.

Japanese markets have often been on the conservative side “so that they are achievable,” said Bossler. The targets she says Japan has set are at 22 – 24 per cent renewable energy, but they

are almost at that goal if you acknowledge hydro power achievements into that combination, she explains.

“Biomass power has almost reached its target,” she says. “But, the question is, when Japan issues the new updated energy strategy this summer, what will renewable targets look like? That’s what we’re all quite interested to see.”

A recording of the webinar can be found here.