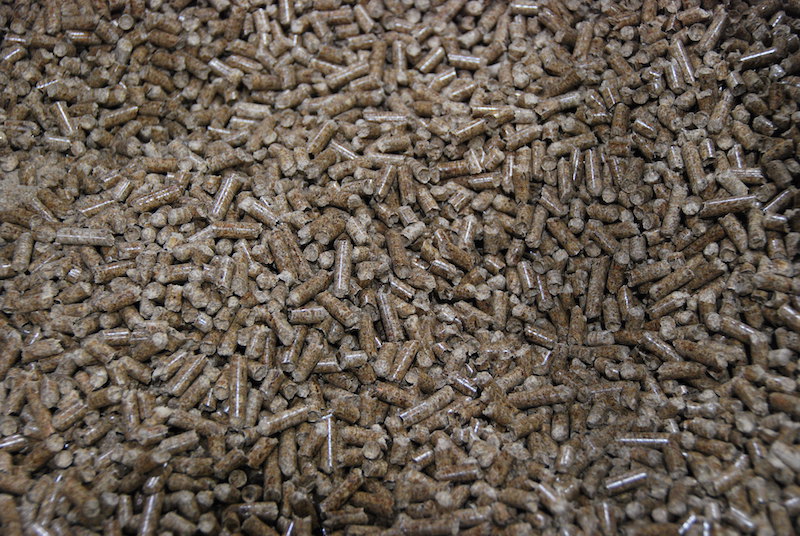 The demand for heating pellets is influenced by policy, weather, and the price of other heating fuels.

Policy that supports the heating pellet markets is based on the fact that pellet fueled appliances lower carbon emissions, support local jobs in forestry and pellet production, and do not pollute with wood smoke. The charts below show two positive environmental attributes. 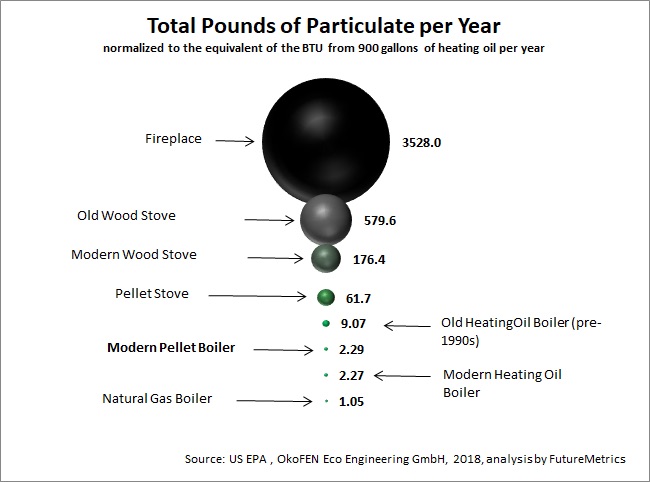 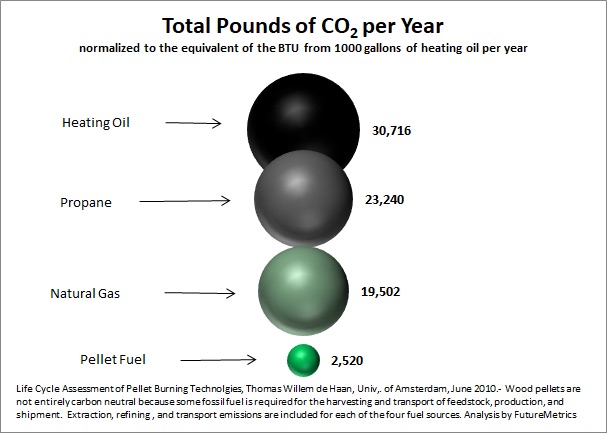 The heating pellet sector is substantial and is expected to grow significantly. The chart below shows the historic global demand and FutureMetrics’ forecast demand for heating pellets under current policy. 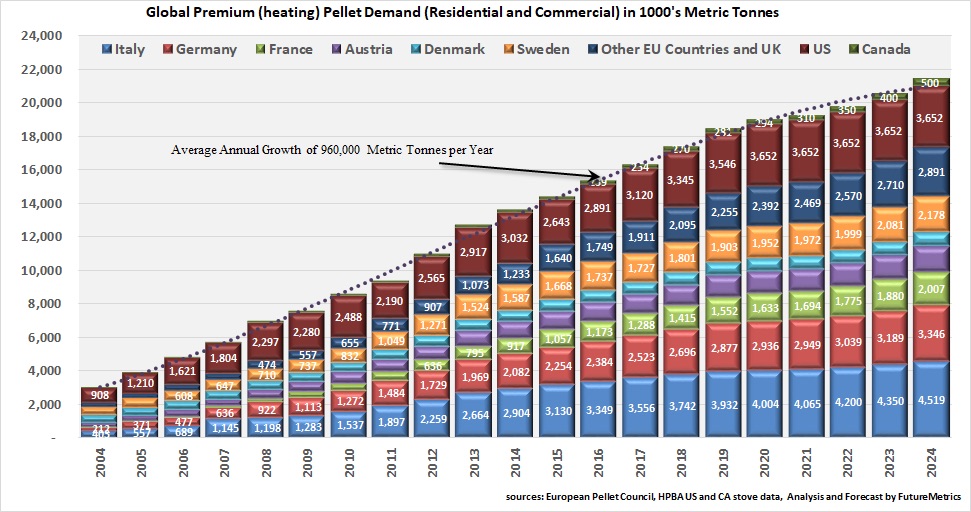 The first requirement for the development of a pellet heating sector is to have a sufficient annual demand for heat (heating degree days). Then, the economic benefits of pellet fuel versus alternative heating sources must be tangible. In some locations, pellet fuel is the lowest-cost alternative. However, in almost all locations, government support for the capital costs of new systems is a critical component of healthy growth.

Pellets can be substituted for coal in two ways: a full conversion or co-firing. During a full conversion, an entire unit at a coal station is converted from burning coal to burning wood pellets. This requires modifications to pulverizers and potentially the burners feeding the boiler. Using any biomass-derived pulverized fuel in larger ratios also requires that the primary combustion air that carries the pulverized fuel to the burners be tempered to a lower temperature than is typical for 100 per cent coal. Building heat exchangers to carry the combustion air heat to the feedwater system, so as to not lower the power plant’s efficiency, is an unavoidable but relatively modest cost. Co-firing is the combustion of wood pellets along with coal in a coal power plant. It can be one of the most efficient ways to meet renewable energy and/or carbon mitigation targets. At lower co-firing ratios of wood pellets, minimal modifications to existing pulverized coal facilities are required. In fact, at lower blends (under approximately seven per cent) of wood pellets, almost no modification is required.

Recent advances in “advanced” waterproof pellets made via steam exploded thermal treatment technology will significantly lower the required capital costs for modifications to the power station and will eliminate the need for dry fuel storage solutions. Using advanced pellets will allow higher co-firing ratios for lower cost than for traditional wood pellets1.

The chart below shows the historical demand and FutureMetrics’ demand forecast for the industrial wood pellet markets. The aggregate demand in 2019 is estimated to be about 21.6 million metric tonnes. That is the equivalent of a 65,000-tonne panamax vessel every day of the year. Note that this demand forecast is based on current policy. 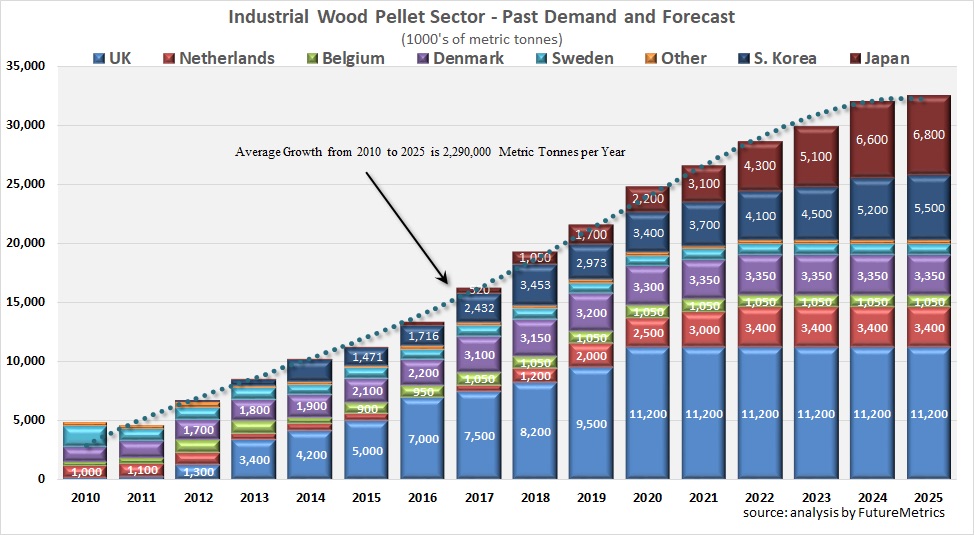 As shown in the chart, future demand in the UK and EU is expected to plateau by 2021. However, major growth is expected in Japan2 and South Korea until 2024. From 2010 to 2025, the average annual increase in demand for industrial wood pellets is estimated at about 2.3 million metric tonnes per year.

This forecast, as noted above, is under current policy. Policies are likely to evolve as the impacts of climate change accelerate. FutureMetrics expects even the U.S. to have a policy for carbon emissions reduction by the mid-2020s. Using pellets as a coal substitute in utility- scale pulverized coal power stations has been proven to be a reliable and economical solution for lowering CO2 emissions.

North America currently dominates the global supply of industrial wood pellets. The industrial wood pellet market began in Europe and, with the evolution of the Drax power stations’ conversion from coal to pellets, grew significantly in the UK. The ability to source abundant and competitively priced wood fibre in western Canada via sawmill residuals enabled British Columbia to lead the way.

The first trans-oceanic bulk shipment of wood pellets left Prince Rupert, B.C., in 1998, almost 22 years ago. FutureMetrics’ partner and operations expert, John Swaan, entered into the first off-take agreement for bulk pellet delivery from North America. Swaan produced pellets at what is now the Pacific BioEnergy pellet plant, which he founded in Prince George, B.C., and he loaded the ship, the Mandarin Moon, in Prince Rupert, B.C., on Feb. 9, 1998. That was the beginning of the transoceanic trade in wood pellets.

Since those early days, North American supply has grown dramatically. As demand has materialized in Japan and South Korea, new pellet production capacity has followed in fibre-rich areas in southeast Asia. The Baltic states (Estonia, Latvia, and Lithuania) have also become major producers of wood pellets. 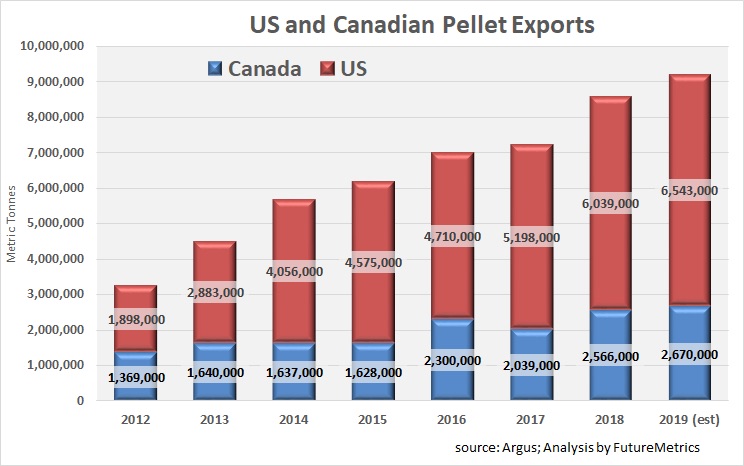 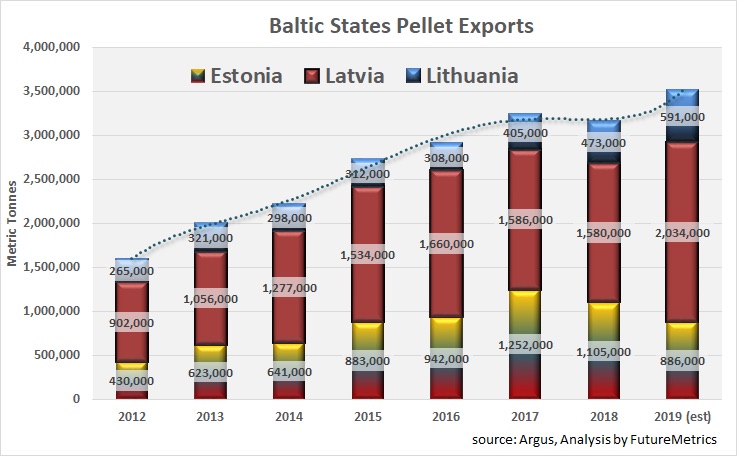 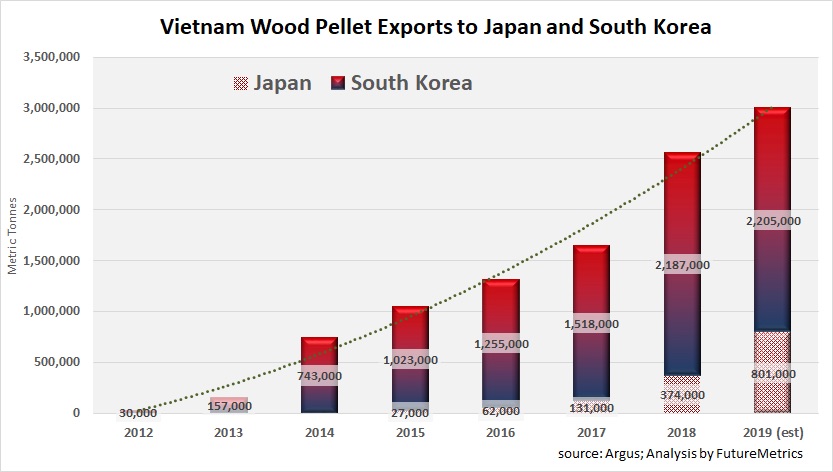 Vietnam production has also increased significantly over the past five years and is expected to exceed Canada’s production in 2019.

FutureMetrics has estimated the historical delivered (CIF) price of wood pellets from international trade data. The value and quantity of imported pellets reflects the actual prices that buyers are paying for the fuel. Most pellets are traded under long-term contracts. Some pellets (probably less than 15 per cent of total trade) are traded on the spot market.

Argus reports the weekly spot price of pellets. However, the spot price is quite volatile compared to the overall prices paid for imported pellets because the spot price reflects short-term supply and demand imbalances. If the market is in a state of excess supply, prices fall. If the market in a state of excess demand, prices rise. Since the spot market is a small portion of overall pellet trade, supply and demand imbalances have amplified impacts on the spot market. Long-term off-take agreement prices are stable and change only due to the terms of the contract. Below is the Argus spot price history. 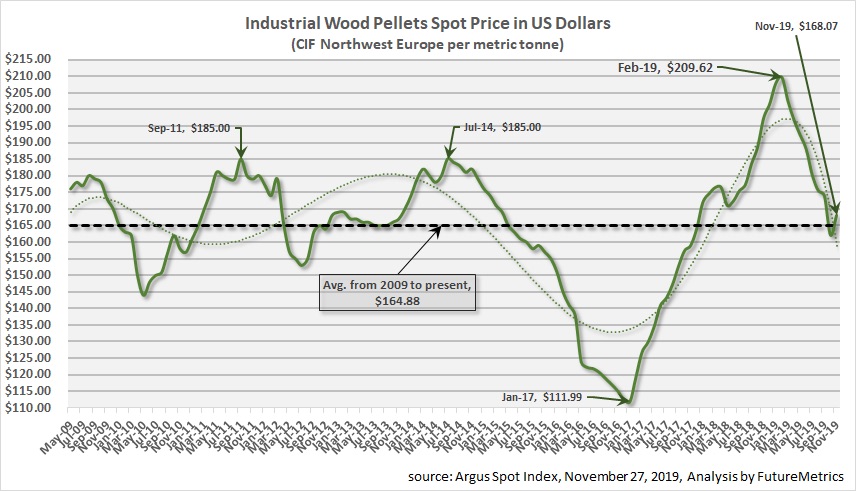 FutureMetrics’ estimates for CIF prices and market shares by major suppliers for the UK, Japan, and South Korea are below. Note that monthly data is somewhat volatile in part due to how the data is gathered and the number of shipment per month for any given month. The trade weighted average price and the trend lines help to see through the volatility. Even with those issues, the estimated pellet prices are far less volatile on a three-month rolling average than the spot prices. 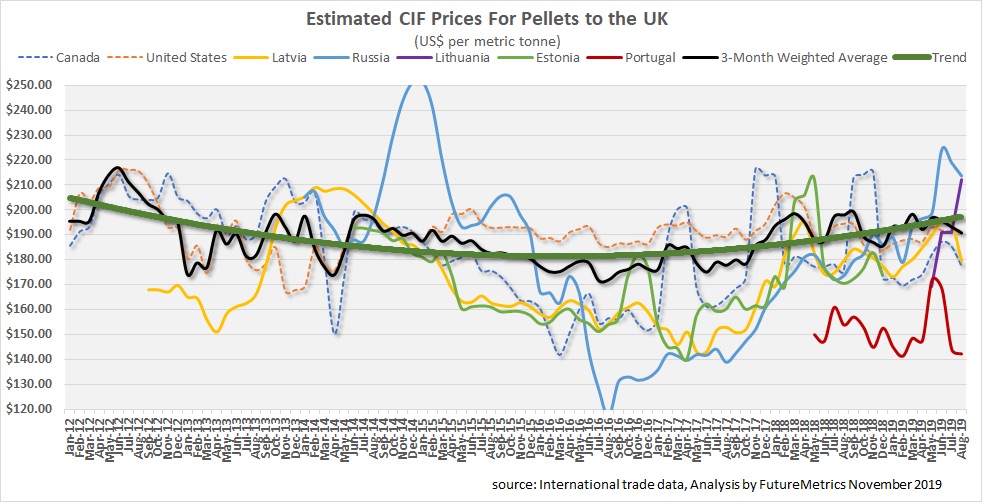 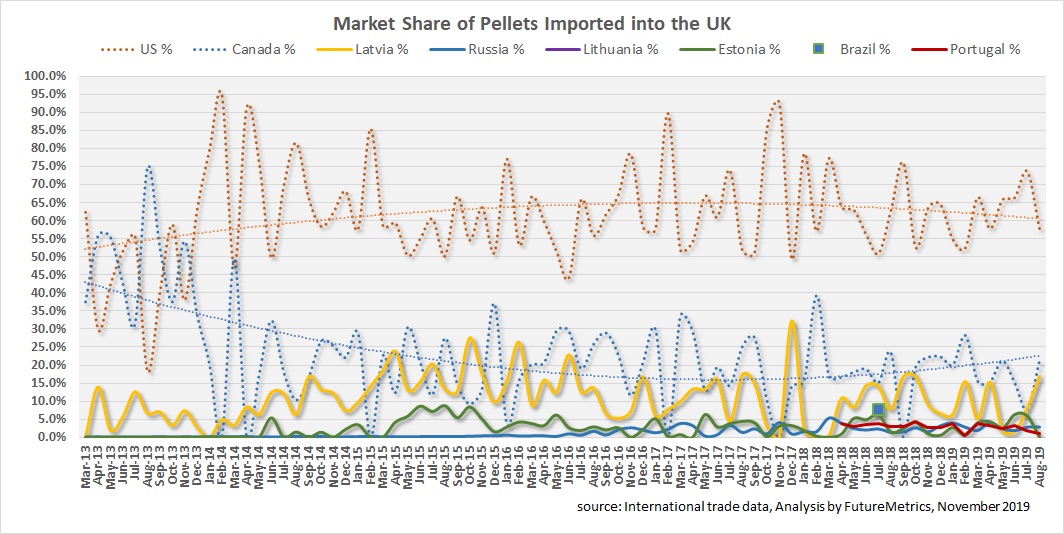 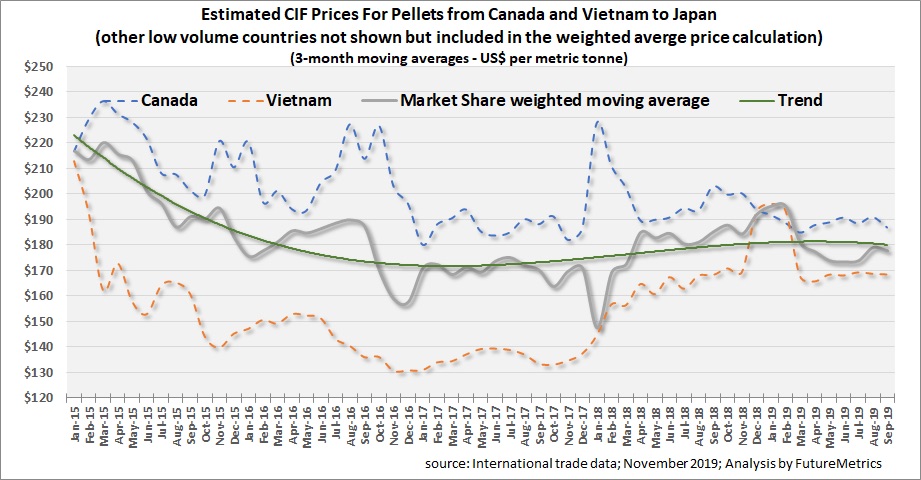 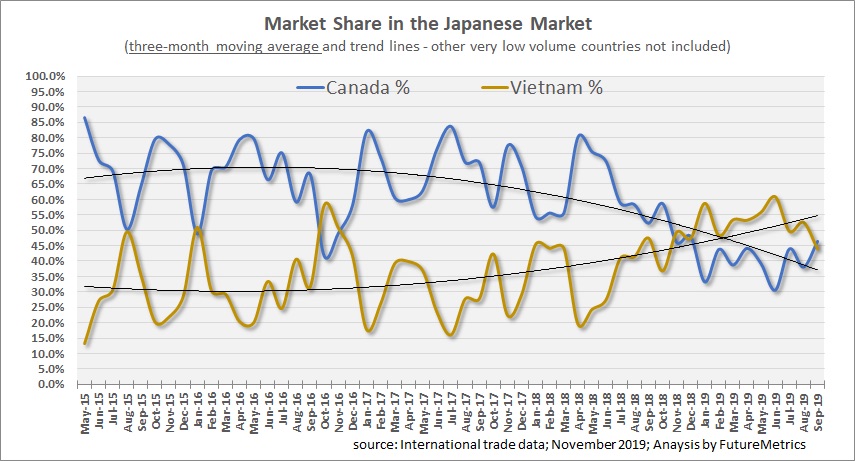 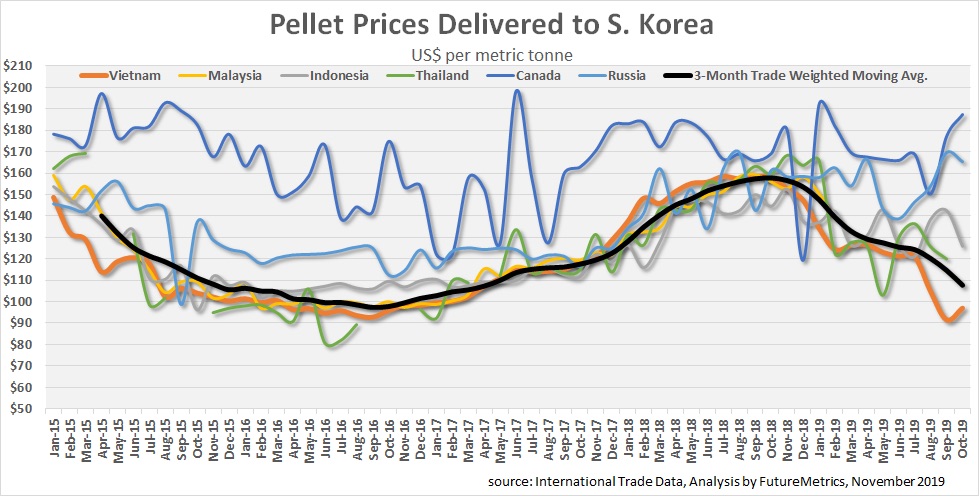 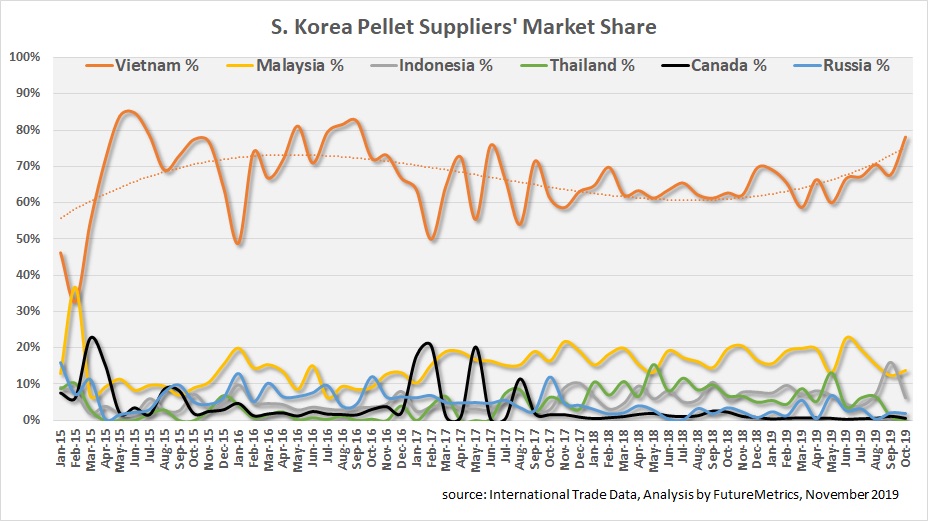 The intrinsic costs of producing and delivering pellets, including typical profit margins, will set the market prices for long-run supply contracts.

Many of the forecast model’s modules use oil prices as a significant source of cost uncertainty. Harvesting and transporting wood to pellet mills, conversion to pellets, transport logistics by truck, rail, and ship, all contain a significant exposure to petroleum costs (such as diesel and bunker fuels). FutureMetrics utilizes the United States Energy Information Administration’s (EIA) forecast for oil prices (West Texas Intermediate or WTI). The chart below shows the EIA forecast (in nominal U.S. dollars assuming two per cent annual inflation) for oil prices and the forecast range of where actual prices may be.4 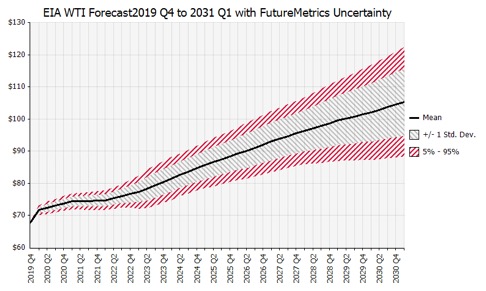 The methodology of estimating expected future CIF prices involves developing independent forecasts for each of the main components of pellet costs:

Expected EBITDA/tonne is based on historical data from the two publicly traded producers (Pinnacle and Enviva – see table below) and from FutureMetrics data based on due diligence analysis on existing pellet plants. 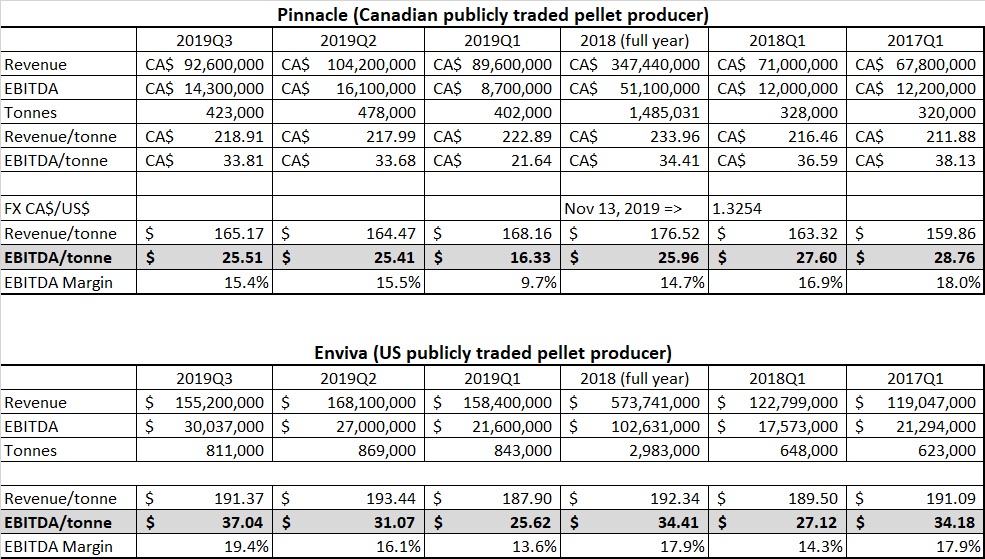 Based on a number of assumptions, the forecasted prices for the next 10 years are shown below. 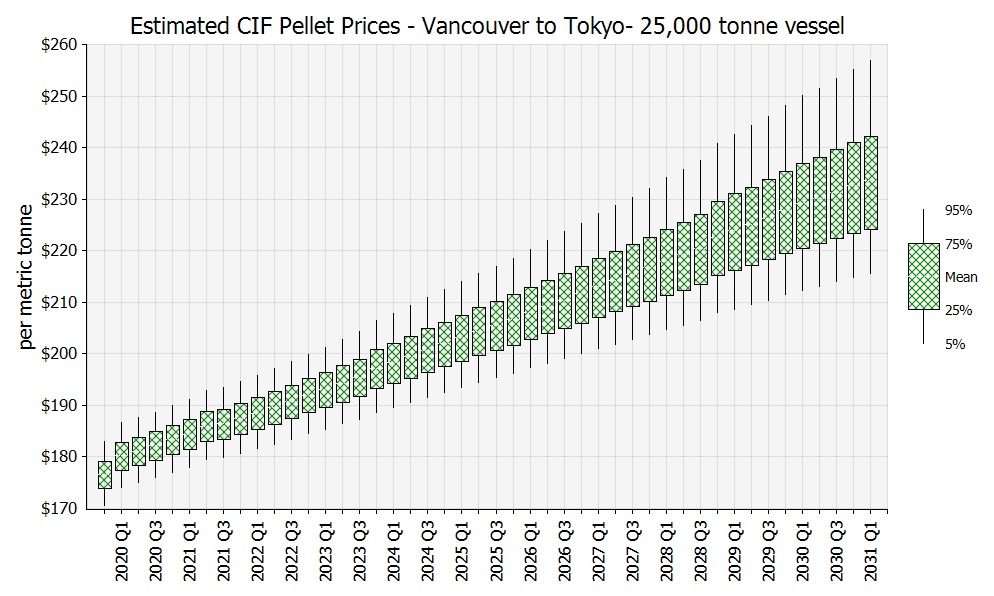 William Strauss, Ph.D., is the president of FutureMetrics.