Aug. 7, 2018 - Together with a large group of member companies, the Wood Pellet Association of Canada participated in the annual CMT Biomass Pellets Trade & Power Conference in Tokyo from May 12–17. WPAC was the platinum sponsor, and reception organizer-sponsor. 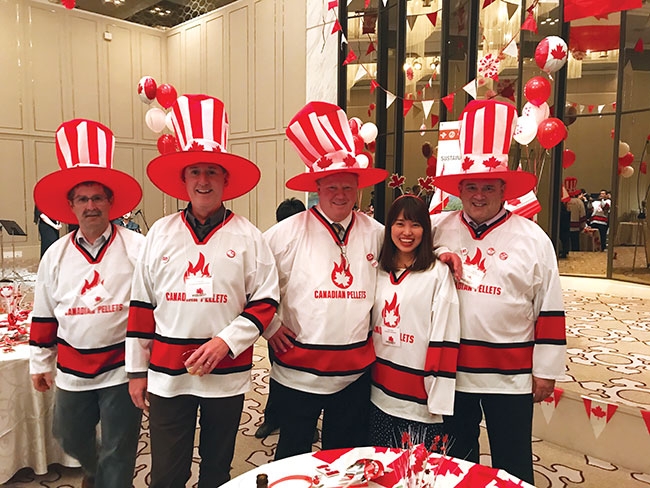 Delegates at the Canada Wood Pellet Day Reception in Tokyo on May 15. Left to right: Rob McCurdy

This was an important event for us. Japanese wood pellet imports have grown almost six-fold in the period from 2014 to 2017, and growth is expected to accelerate until at least 2025. Canada shipped 360,000 tonnes of pellets to Japan in 2017, up from just 90,000 tonnes in 2014. Canada currently holds a 70 per cent market share for wood pellets in Japan. Our objective at the CMT conference this year was to continue to brand Canada as a preferred supply source, emphasizing our sustainable fibre sourcing, high product quality, reliable and efficient supply chain, and creditworthy producers. We aim to continue increasing exports to Japan and to maintain our market share.

From May 12–13, for the first time ever, WPAC — with the support of Sumitomo, Pinnacle Renewable Energy, Pacific BioEnergy, Premium Pellet, Fibreco, and Tolko Industries — hosted a hugely successful golf event in nearby Ishioka for about 30 Japanese and South Korean customers. Festivities included dinner, an evening of karaoke, and a golf tournament at Summit Golf Club.

On the evening of June 15, WPAC hosted a reception. In addition to the conference delegates, we invited our entire Japanese customer network. We dubbed the event Canada Wood Pellet Day. We decorated the ballroom with Canadian flags, banners, streamers, and balloons. The Canadians began the night wearing Canadian hockey sweaters and flag hats, but had to give them up to our Japanese guests who proudly wore them and then took them home as souvenirs.

There were a dozen key conference takeaways from the various speakers.

This was the fourth consecutive year that WPAC and our members have participated in the CMT Biomass Pellets Trade & Power Conference in Tokyo. However, this was the first year that we held our golf event, became a platinum sponsor, organized and sponsored the main conference reception, and organized our own tour of a biomass power plant. Canada’s accelerating growth in wood pellet exports to Japan, coupled with our 70 per cent market share, are good reasons for us to continue with this annual event.

The Wood Pellet Association of Canada gratefully acknowledges financial support from Natural Resources Canada’s Expanding Market Opportunities Program and Forestry Innovation Investment’s Market Initiatives Program. We could not have held such a successful event without their help.