December 1, 2015 - It all began with the Ontario government’s mandate to end the use of coal power generation in the province by the end of 2014. 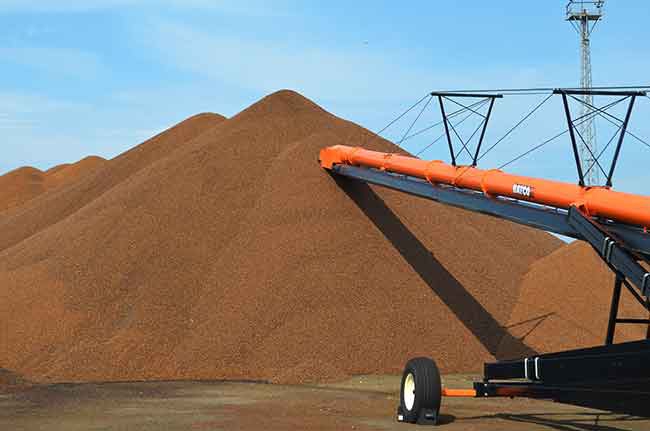 The Arbapellets used at OPG Thunder Bay are water resistent and carry a 40 per cent lower volume than white pellets. It all began with the Ontario government’s mandate to end the use of coal power generation in the province by the end of 2014.

Ontario Power Generation had two stations operating in northwestern Ontario using coal for fuel: Atikokan and Thunder Bay. Atikokan would be the first to be converted to a new fuel source, making the transition to locally-sourced white pellets. And in transitioning the plant to biomass, the plant would become OPG’s newest thermal station.

Supply contracts were issued for 90,000 tonnes of pellets annually, equally replacing the amount of energy created from the coal-fuel previously used on an annual basis. The contracts were awarded to Resolute Forest Products and Atikokan Renewable Fuels (later sold to Rentech).

With the $170 million conversion of Atikokan underway, the focus shifted to OPG’s other northwestern Ontario peaking plant: Thunder Bay. The first thought was just to extend the natural gas pipeline to the plant, a measure that became increasingly cost-prohibitive. At the same time, a member of the OPG team was attending a conference in Vancouver, and listened to a presentation on advanced biomass. The individual shared the information regarding advanced biomass with the rest of the team, and exploration into the fuel source began.

“It was really just a timing situation with this individual being at the conference, hearing about advanced biomass at the same time that the gas conversion was on the rocks,” says Faron Rollins, project manager for the Thunder Bay conversion.

The bulk of energy production in Ontario’s northwest comes from several hydroelectric sites throughout the region. There is approximately 1,200MW of installed capacity currently feeding the grid, with an average daily demand of around 500-600MW. But with winter demands increasing, the expansion of electricity resources in the northwest and the possibility of mining developments in the Ring of Fire, peaking stations need to be ready to fire up on a moment’s notice.

Very little information
Early 2013 marked the beginning of research into use of advanced biomass as a potential fuel source for the Thunder Bay generating station. Test burns would be needed in order to try out the fuel in the current system, but research was needed to determine what modifications, if any, needed to be done before test burns could be completed.

OPG had to turn to industry stakeholders in order to provide its own research into the prospect of using the fuel source. They first commissioned an equipment manufacturer in the United States, who had its own pilot-scale facility, to run the tests. Two types of advanced biomass were tested, but one performed much better than the other. That testing was followed by the commissioning of multiple safety studies to analyze any issues that could occur using the coal system for the biomass. Additionally, material handling experts were brought in to track the pellets from their arrival on site to the moment they are pulverized, looking for any upgrades that were needed to optimize the process.

The results were the discovery of three areas needing improvement: stronger belt scrapers to remove more material from the conveyor system, improvements to the grounding of all system components and an upgrade of the dust suppression system.

There was also a question of the risks surrounding electrostatic discharge (ESD) in the facility with the transition to a wood-based fuel. The coal bunkers were the particular area of concern, identified as the one location in the system where ESD was seen as a potential hazard. Officials at OPG located a company that specialized in fire and explosion prevention, with experience in ESD. That company recommended that OPG increase the humidity in the coal bunkers to 55 per cent to all but eliminate any potential ESD issues.

The first round of testing at the OPG site involved using one mill to prove the concept, as well as closely monitor the dust in the operation. The positive results from that testing led to the addition of the second mill the next day, this time testing to ensure that the desired throughput could be reached. Once again, the testing proved very positive, as the fuel was handled safely, milled and full load was achieved. The third and final test was to test fuel capabilities during winter. That final test run took place in January, when temperatures in Thunder Bay are often in the -20 C to -40 C range. It turned out that, in colder temperatures, the advanced biomass actually handled better than coal.

Six months following the final test, full approval to go ahead with the conversion was given.

Securing a fuel source
With little production taking place in North America beyond bench-scale, OPG was forced to look to potential advanced    biomass resources in the European market. They connected with Arbaflame, located in Oslo, Norway, which eventually became the plant’s fuel supplier.

The Arbapellets are water resistant and carry a very low self-ignition risk. They carry a 40 per cent lower volume than white pellets with the same energy content. The steam-treated, thermal-processed pellets contain approximately 75 per cent less nitrogen oxide than coal emissions and virtually no sulphur dioxide.

OPG Thunder Bay has a contract in place with the Independent Electricity System Operator (IESO), which is tasked with ensuring there is enough power on the grid to meet the demands of Ontario consumers. IESO and OPG signed a contract based on the expected need for power from the plant, dictating the amount of fuel needed annually for power generation.

Boyko and his team were able to approach Arbaflame to secure a contract for 2015 for the necessary fuel capacity based on the demands on the IESO contract, resulting in the ability to move forward with the conversion project.

The Arbapellets used at OPG Thunder Bay are water resistent and carry a 40 per cent lower volume than white pellets.

The transition
The conversion itself was a smaller scope than Atikokan, thanks in large part to the experience gained on that project, enabled by the properties of the fuel and the diligence of the project team.

“The project team did a very solid risk assessment, having known what some of the areas to focus on were because of the experience from the Atikokan project,” said Brent Boyko, director of biomass business development for OPG.

Initially, there was a belief that a rigorous cleanup program would need to be implemented based on the dust created by the pellets. But officials were “pleasantly surprised” with how little cleanup was needed as a result of the biomass fuel, especially compared to what was needed for the white pellets used at OPG Atikokan.

There were new concepts that members of the team needed to learn, including the steaming of the bunkers and the modifications made to the pulverizers. Add to that the knowledge required for the upgrades to the dust suppression and grounding systems. Overall, it took the whole crew on-site around six months to become fully educated and comfortable with the changes that had been installed at the plant.

The cost of the conversion of the generating station from coal to advanced biomass was $5 million, a fraction of the $170 million cost for the Atikokan project.

Challenging logistics
While the conversion cost remained low thanks to the ability to use the equipment already in place from the coal-fire generation, the cost of the fuel remains at a premium. As of now, there is no local, regional, national, or even continental supplier for the type of advanced biomass that OPG Thunder Bay is using for its operation.

The pellets from Arbaflame are transported by non-dedicated barge from the port in Oslo to OPG through the St. Lawrence Seaway and the Great Lakes. The ocean-going ship arrives in Thunder Bay at Keefer Terminal, located just down the road from the generating station, where the fuel is then loaded onto trucks to be driven the rest of the way to the outside storage area at OPG. The pellets are shipped in bags, making for easier transport from port to station. Right now the situation is less than ideal, since the pellets are not transported on a dedicated ship, but it is hoped that the growth of a domestic market will be forthcoming.

Global leader
The completion of the project makes OPG Thunder Bay the first at-scale 100 per cent coal-to-advanced-biomass conversion in the world. The project provides a model for coal-based energy generation facilities around the globe that is cost-efficient, while also using a fuel that has the potential to be locally sourced in many parts of the world.

The plant could be the key to the development of the biomass heating industry in Canada.

Chiarelli talks biomass
Following the official opening of OPG Thunder Bay in mid-August, Ontario Minister of Energy Bob Chiarelli was excited to share his thoughts on biomass as part of the province’s energy mix.

“One of our green policies in Ontario is to replace dirty coal with green energy,” Chiarelli says. “Moving to both conventional biomass and advanced biomass in Atikokan and Thunder Bay is part of that policy. We’re very, very pleased to have been able to do this.”

With the Atikokan and Thunder Bay conversions     complete, the minister moved on to explore opportunities for the expansion of biomass as part of the province’s energy infrastructure.

“We want to try and grow the biomass industry. We also want to try and export the industry. It’s on our agenda for OPG and Hydro One to look at export markets. Biomass is one of them. We’re also looking at the possibility of  advanced biomass as an emerging technology and an emerging market.”

But the minister also recognized that there is the potential to create an advanced biomass industry in Ontario as well.

“We might be able to justify advanced biomass here in Ontario. There are people who have looked at it, but we have to help them create a market.”

Part of that solution is recognizing that the expansion of a homegrown biomass industry also has a significant impact on another important industry to the Ontario economy.

“We are looking to be innovative and creative in expanding the biomass business. Because it’s more than energy; it’s also forestry. There has been a resurgence in forestry. We want to piggyback biomass on to that.”

With a strong political will prepared to help drive the industry forward, the future looks bright for the biomass industry in Ontario.