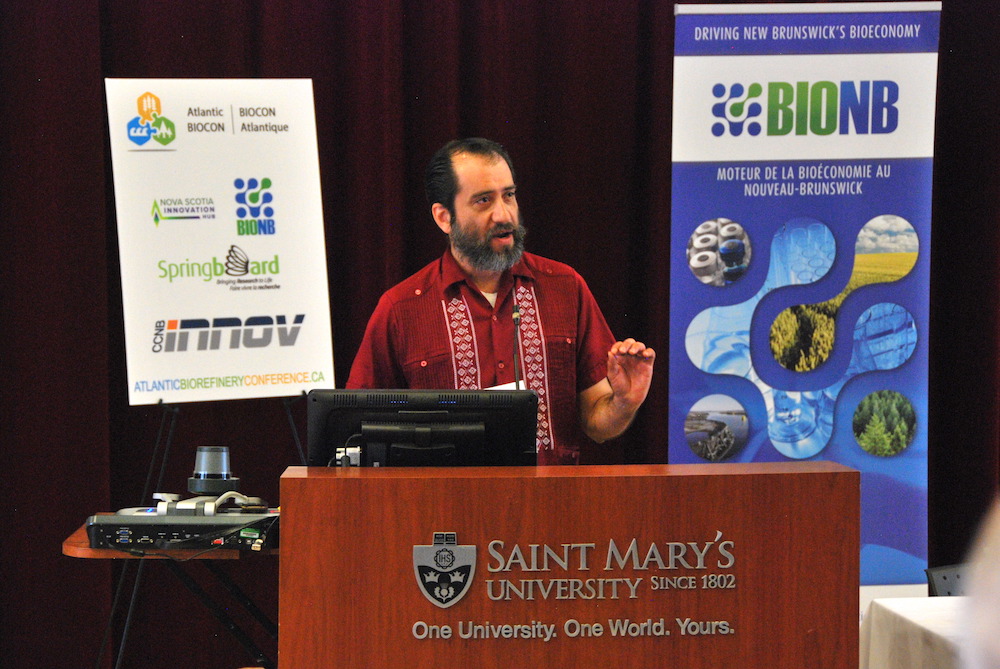 Roberto Armenta, chief scientist and director of R&D for Mara Renewables, presents at Atlantic BIOCON held in Halifax this week.

With its unique mix of location, labour and business networks, Atlantic Canada is in an ideal position to scale up its bio-based economy and speakers at Atlantic BIOCON held this week in Halifax hammered home that point.

The annual three-day conference hosted by BioNB took place this week at Saint Mary’s University with around 150 industry insiders and onlookers brainstorming ways to launch and accelerate regional bio-based projects.

You could practically hear the gears turning in the audience as presentation after presentation shared success stories, lessons learned and offered new ideas and opportunities to grow Atlantic Canada’s industrial bioeconomy.

Two days of sessions included speakers from industry, government and finance, the latter of which was a unique panel of investors speaking to typical challenges for bioeconomy investors and hurdles for bioeconomy entrepreneurs. The panel included representatives from Innovacorp, Natural Products Canada (NPC) and Sustainable Technology Development Canada (STDC), as well as Sustane Technologies’ vice-president of finance and strategy, Fraser Gray, who offered advice as a company that has benefited from financing partnerships.

Pascal-Hugo Plourde, STDC’s director of partnerships, said over the foundation’s 18 years as a national cleantech project funder, the bioeconomy has changed significantly.

“There is much more of a maturity in the biofuels space than in other bio-products. There has been a decline in bio-products proposals and double the number of recycling and waste-products fuel proposals,” he said.

STDC has invested more than $1 billion in well over 300 projects across Canada, Plourde said, and they “always underestimate the capital it takes to bring it to commercialization.”

NPC’s Shelley King stressed the coachable aspect, sharing a story about an entrepreneur whose potential investors backed out when he got impatient with the process and gave the largest investor an ultimatum. “We invest in people we can work with,” she cautioned.

Dartmouth, N.S.-based Mara Renewables is one of a handful of Atlantic Canada success stories that inspired conference attendees.

Roberto Armenta, chief scientist and director of R&D, shared the company’s research and development story that led to their commercial algal oil plant in the United Kingdom. The oil, refined from a particular strain of microalgae sourced from the Bay of Fundy, is a replacement for traditional fish oil. “It’s not this holy grail, but it’s addressing a need in the industry, and addresses the stressors on a natural resource – fish stocks,” Armenta said.

Mara is now one of just two companies in the world with similar technology, and has 110 issued patents and 120 pending patents. Financing these patents was a hugely important step in the company’s development, Armenta told the crowd.

Other sessions focused on future opportunities for the bioeconomy in the region. Port Hawkesbury Paper is offering a unique opportunity to a bio-based company with its Eco-Industrial Park. The paper company has unique assets at its mill site in Cape Breton and is looking for a partner that would utilize waste heat and residual cellulose.

Ken LeBlanc, energy manager for the Cape Breton Regional Municipality, presented on the challenge of finding the right scale of technology to utilize their municipal waste, which includes around 5,000 tonnes of woody biomass per year.

Small- to medium-sized municipalities are often cash strapped and don’t know who to turn to for solutions, he said. They resort to the cheapest option to dispose of the waste, instead of a long-term solution to use it to their advantage as a fuel. “Anyone want it? We don’t,” he quipped to the crowd.

In testimony to the spirit of the conference, several in the crowd spoke up with suggestions and potential contacts for LeBlanc.

During breaks, conference attendees could peruse a poster display of bio-based research from post secondary students across Atlantic Canada. On Day 3 the posters were judged and the conference wrapped with an awards presentation to the winning project.

This year’s winner is Sonia Kumar, a Ph.D. candidate with Dalhousie University who researched methods to extract pigments and antioxidants from red beets.

Kumar said she plans to continue the research and explore ways to commercialize the process as cosmetics and as antimicrobial agents.