March 26, 2015 - When GreenField Ethanol became GreenField Specialty Alcohols in 2013, it marked a shift in business philosophy for one of Canada’s longest-running and most successful ethanol producers. 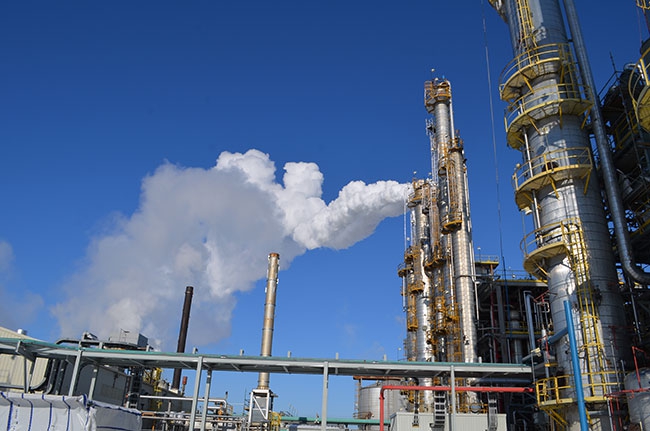 Much like the shift that occurred following the first name change – a transition from Commercial Alcohols to GreenField Ethanol in 2006 – the change in name marks a major shift in focus from the ethanol model biofuel plant to a modern biorefinery.

With its primary production plant located in Chatham, in the heart of southern Ontario’s corn belt, the company is in an ideal location to take full advantage of a hearty supply of corn for the production of biofuels. Since the plant opened in 1997, GreenField has purchased over $1 billion of corn, producing one billion litres of ethanol and two million tonnes of dried distiller grains (DDGs) in the process. The company has exceeded nameplate capacity production every year since 2002.

Beyond ethanol, GreenField is already producing alcohols and CO2 for the commercial and industrial markets. Industrial alcohols are being sold for beverages like vodka, hand sanitizers, antifreeze, cold medicines and perfumes while CO2, a by-product of alcohol production, is being supplied to the beverage industry and dry ice manufacturers.

Chatham is also an excellent location for the expanding industrial alcohol producer. The plant is less than five minutes from one of Ontario’s 400 series highways, and is an hour drive from two border crossings with Michigan. They have an onsite rail hub and close access to Lakes Huron and Erie. The company uses the Port of Montréal as its hub for exporting to several international markets, including: Chile, Brazil, Puerto Rico, West Africa, Mexico, and a handful of European and Asian countries.

As a result of the expanding global markets within the reach of GreenField’s products, the company now expects only approximately one-third of its products staying in the domestic market, with one-third going to the Americas and the other third reaching European, African and Asian customers.

Major investment
While the name change to GreenField Specialty Alcohols in 2013 may not have been a clear enough indication of the significance of the business shift underway at GreenField, the announcement of a $40 million investment in its Chatham plant in October of 2014, and the projects on which that money is being spent, make the transition abundantly clear.

A significant portion of that investment will go toward a second cogeneration facility, which will enable the plant to be self-sufficient for its power requirements.

In this regard, GreenField is working with Entegrus, the local electrical distribution company in the Chatham-Kent region. Entegrus is helping GreenField withdraw from the electricity grid, in turn, allowing the power producer to make the surplus power available to current and future consumers. Turbine Efficiency Limited, which specializes in the maintenance, overhaul and service of gas turbines, is supplying the cogen system.

“Approximately one quarter of the $40 million investment is slated for the cogen unit so that we can be totally independent of the power grid,” said Angelo Ligori, plant manager of GreenField’s Chatham facility. “We will generate all the power we need – all by ourselves by the end of 2015.”

That homegrown power source is integral for the plant, which currently runs 24 hours a day, seven days a week to keep up with customer demand. Whether it’s ethanol or industrial alcohol that needs to be produced, the company is in a strong position to meet demands on short notice.

“We are a swing plant, so we can go back and forth between producing industrial alcohol and ethanol,” Ligori said. “But we’ve been focused on expanding the industrial product line.”

That focus is at the heart of half of the 2014-15 investment, with approximately $20 million earmarked to increase industrial alcohol production.

The IA42 investment is pretty self-explanatory: expand the capacity of industrial alcohol output to 42 million litres. With the expansion, GreenField will be able to increase its industrial alcohol production from 50 per cent to 75 per cent by the end of the year. The extra volume will allow GreenField to continue its penetration of international markets, including expanding its recent breakthrough into Asia.

The final quarter of the investment, or approximately $10 million, is slated for the introduction of a new, patented technology developed by GreenField known as the Twin Screw Extruder (TSE). The TSE demonstration plant, with a capacity of five tons per day, is a lignocellulosic biomass pretreatment/fractionation system that extracts sugars from more complex materials in a versatile, largely mechanical, acid and solvent free fashion. Those sugars can then be fermented into cellulosic ethanol or be further processed into biochemicals and even bioplastics.

The TSE has been specially designed and constructed so that it is small enough to fit into a typical trailer used to transport a wrecked car or a piece of heavy equipment.  This makes it easy for the company to take the system to secondary locations to run tests with different feedstocks.

GreenField established the baseline for the TSE using corncobs. The challenge with cobs – or any lignocellulosic biomass – is that it contains two sugars; the hemicellulose sugars referred to as C5 sugars and the C6, sugars or cellulose sugars; both of which need to be recovered in their cleanest, inhibitor-free form.

The cobs – or small pieces of any of the most common low-to-high lignin cellulosic feedstock – are placed in a steaming bin to start heating up and impregnating the material with water. From there they are conveyed to the first of two extruders specially modified to incorporate the company’s proprietary solid-liquid separation capability. The first extruder further particle sizes the biomass. (If using wood instead of cobs, this would be the stage where hot-water soluble extractives would be removed). From the first extruder, the cobs are conveyed into the first of two reactors where the C5 sugars are liquefied, and the C6 sugars undertake their first stage of cooking to make them digestible for the enzymes. As the material moves through the second extruder, the C5 sugars are extracted in a discrete stream of liquid virtually free of insoluble solids. The C6 sugars, the solid fraction, pass through the second extruder to the second reactor. The second reactor completes the cook of the C6 sugars. As the reaction phase is completed, the C6 sugars, along with the C5s are ready for further processing into their
monomeric/fermentable form suitable for the production of liquid biofuels like ethanol or other bio products.

GreenField is currently running tests on the TSE with various feedstocks to validate that it is feedstock agnostic. Once the testing phase is completed and all issues have been addressed, GreenField will begin making plans to build a commercial-scale TSE System.

The GreenField facility in Chatham

Future Outlook
The eventual commercial-scale development is just one of a series of long-term plans for GreenField at its Chatham facility. Every piece of the long-term plan is a step towards building a strong biorefinery producing alcohols that can be used for multiple industries across the global marketplace.

The company started the process by developing a system for corn oil extraction. Originally, there was a possibility that the corn oil extraction process would lead to the development of a biodiesel facility. But the company decided against it because, as Ligori put it, the company is “still waiting for that industry to mature.” Instead of building a biodiesel production plant, the company has begun selling the product to current producers of the renewable fuel, with Hamilton-based BioX being just one of a handful of their corn oil customers.

The next step is to provide CO2 and waste heat for hydroponics. Truly Green Farms runs a greenhouse that is adjacent to the GreenField property, and the company will use the CO2 and waste heat to grow tomatoes. GreenField already sells some of its CO2, from the fermenters, to Praxair, which leases land on the GreenField property. Praxair cleans up the carbon dioxide and sells it to other greenhouses, the beverage industry and dry ice manufacturers.

Another project GreenField is involved in is the secondary development of DDGs-extracting protein from the grain for the development of products like gluten, and extracting the fiber for its use in the formulation of specialized animal feed and cellulosic ethanol production.

With solid long-term plans backed by significant investments in its Chatham plant, GreenField is well positioned to become one of Canada’s premier biorefiners.