March 26, 2015 - Demand for wood pellets may be steady and growing but access to raw materials is always a challenge for independent pellet producers. Pacific BioEnergy’s pellet plant in Prince George, B.C. is the second largest in Canada. It requires a massive amount of raw material to feed its 10 pellet mills and though the region has plenty of fibre, like any independent pellet producer in the region, it relies on short-term contracts to supply its needs. 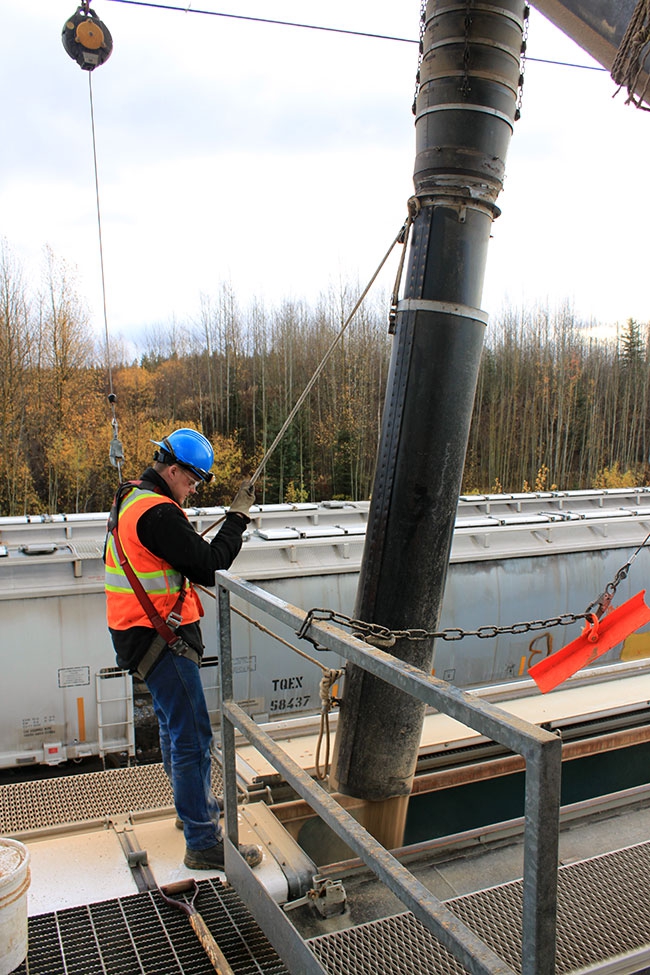 Pellets are loaded into a rail car at Pacific Bioenergy’s plant. The agreement helps fuel their 10 pellet mills with a reliable fibre supply. Demand for wood pellets may be steady and growing but access to raw materials is always a challenge for independent pellet producers.

A new multi-party arrangement, however, has bought Pacific BioEnergy a seat at the bargaining table next to the major forest licence holders and the producers of the coveted shavings that make the best feedstock for wood pellets. The contract is nuanced and took two years to finalize but the end result is a good example of how all the manufacturers that rely on wood fibre can work together to reduce waste and improve profitability.

New kind of licence
In 2005, the forest industry was grappling with the question of how to function in the aftermath of the mountain pine beetle epidemic. The government introduced forest licences that would require the licence-holder to build non-lumber capacity to make good use of the lower-quality fibre while the sawlogs would continue to be traded to the sawmills.

Pacific BioEnergy acquired one of these forest licences in Quesnel, which is about 120 km from Prince George. The licence required them to build close to one million cubic metres of non-lumber capacity, which would provide them access to 700,000 m3 per year of crown timber for 15 years.

An expansion at the pellet plant in Prince George met half of the government’s requirements so the licence was split in two. This second part of the licence remained inactive while the company sought a suitable partner.

The Quesnel crunch
Meanwhile, the government had been using the vast amounts of dead pine that was nearing its best-before-date to provide short-term forest licences to first nations. But all the economic activity that First Nations built around these temporary licences is up in the air as usable sawlogs become scarce. In 2014, Canfor closed its Quesnel sawmill in a surprising swap with West Fraser that left West Fraser with its forest licences (to read the details of this exchange, go to www.woodbusiness.ca/remanufacturing/canfor-closing-quesnel-mill). This was a devastating blow to the logging community.

“With Canfor leaving, it took roughly about a million metres of processing capacity out of this area,” explains Gerry Powell, executive director of Nazko Logging. “Contractors we used to rely on to help us out were suddenly out of work.”

Since the value of the wood is diminishing while the costs are escalating, the feasibility of the industry rests on the strength of the lumber market. A strong market means there’s value even in the dead pine, but if the market falters, the cost of processing the wood would outweigh its value.

Tolko is one of the companies that has been a leader in finding value in the brittle pine. Like Nazko Logging, Tolko was looking at a diminishing fibre availablity as the company’s forest licences in the region were nearing their completion. With one major forest fibre consumer dismantling a mill, a second closure would be devastating to the small forestry town.

When Pacific Bioenergy went to the government to negotiate an extension on the agreement, the company was encouraged to find a solution that would support the forest industry in Quesnel. The solution is a biomass preprocessing facility at Tolko’s Quest Wood sawmill and a joint venture between Pacific Bioenergy and Nazko First Nations (Nazbec).

“We worked out a fairly complex commercial agreement between Nazko First Nations, Tolko Industries and ourselves,” explains Brad Bennett, vice-president of operations for BioEnergy. [We] presented that plan to [the] government. Government has said, ‘Good, if you do this, we will activate the licence.”’

Nazko now has a logging commitment and partnership in a licence that allows them to keep their operations rolling as long as the economics and the mountain pine beetle lasts in Quesnel. Tolko has a supply of logs for the near future with provisions for renewal. Pacific Bioenergy has secured a stable supply of fibre.

Aside from all parties receiving the incentive to keep the machines running, the bonus is that much of the fibre that Tolko is bringing in from the woods would otherwise be left in the forest and burned. This biomass processing facility gives waste wood a chance to be processed into a usable product.

Tangled web of trade
As a wood pellet producer in British Colombia, Pacific BioEnergy is constantly renegotiating short-term contracts for its raw material. The plant’s location in Prince George provides a variety of players with whom to negotiate, but as long as the company is dependent on others to provide its feedstocks, it lacks a strong position in negotiations.

“We tend to negotiate both sawmill residuals and forest residuals with sawmills that have allocations of Crown tenures which give them both term and volume certainty on a percentage of their supply. We have neither of those things, so we find that the market is imbalanced when we go to negotiate contracts,” Bennett says.

Pacific BioEnergy had a forest licence, but the company wasn’t looking to simply harvest its own fibre to be processed in Prince George. Rather, the harvest goes to Tolko’s sawmill in Quesnel where the sawlogs are processed and the biomass-quality logs are chipped and traded on the pulp market. The only fibre that will make its way to Prince George is the sawdust out of Tolko’s sawmill and any chip fines from the chip processing.

“It’s an integrated web of contracts and trades that go on and it’s good for our business,” Bennett says. “It helps us minimize transportation, reduce costs and keep the fibre flowing to the best end-use facility.”

In the end, the facility will give the forest town a shot in the arm. Trade agreements support logging in the region, the sawlogs go to Tolko’s sawmill, chips go to local pulp mills and the sawmill and chip fines go to Pacific BioEnergy or are traded with Pinnacle Pellets to reduce shipping costs.

“There’s quite a morass of movement of fibre that goes along with that facility,” Bennett explains. “A lot of it is being traded locally. Some of it’s going to go to support Pinnacle’s facilities, some of it’s going to support the pulp mill, some of it’s supporting chip exchanges between Canfor and the pulp mill, but the bottom line is that it’s generating another 200,000 oven-dried tonnes of biomass into a marketplace that needs more wood.”

It’s a win-win partnership between First Nations, Tolko and Pacific BioEnergy that provides benefits and security to all three participants. As part of the arrangement, Tolko is building the facility alongside its sawmill.

“It was pretty complex – it took us at least two years to do the deal,” Bennett admits. “But we did it and everybody’s happy about it and it’s been a good partnership to date. Everyone’s committed to doing what they have to do under the agreement and everyone’s doing it.”

Pellets are loaded into a rail car at Pacific Bioenergy’s plant. The agreement helps fuel their 10 pellet mills with a reliable fibre supply.

Processing biomass
Canadian Biomass made two visits to the site while it was in construction. During the first visit in October, much of the machinery was in pieces and it was difficult to get a good idea of how they would fit together. On the second visit in November, however, the facility was just waiting on a few extra touches. The first logs were fed into the debarker in early December.

In order to get the system operational, around 40,000 metres of biomass-quality logs had been stacked in the log yard since August from logging sites that were within an economical trucking distance. “We took advantage of the closer wood while we were operating there and now we’re moving further away,” Tolko’s fibre flow manager Eric Pascas explains. “So we’re pretty much going to be working off this inventory during the commissioning phase and right through until break up.”

The arrangement is unique in the region, but it’s the kind of arrangement that may become more common as fibre in the Interior deteriorates. Pellet plants and paper mills are continuing to require feedstocks even as sawmills are cutting production. As it is, there is no easy model to follow – the distinction between sawlog and biomass log isn’t even black and white.

The facility is still gearing up. It is now running on one shift with plans to add a second shift in May when the logs thaw and debarking is more efficient. In the meantime, the sawmill is running at full capacity and the new partnership between Pacific BioEnergy and Nazko Logging (Nazbec) is working steadily through the winter with the security of a 14-year licence for 100,000 m3.

Biomass processing
When the biomass logs arrive in the log yard, they are fed onto a hot log deck or onto a pile of inventory with a log loader and stacker. The deck is on an incline to meter the wood into the 60-foot Fuji King debarker.The logs are debarked with the debarking conveyor running underneath to take the hog into the existing sawmill system to incorporate the biomass hog with the sawmill hog.

Once the log exits the debarker, it moves over a set of infeed chains to run directly to an 84-inch CAE chipper. A conveyor brings the chips over a BM&M screen. Overs are sent back through the system while the chips travel a covered chip belt conveyor and are dropped into a storage bin.

Indicators tell the truck drivers which bin to haul while a level system notifies mill staff of the bin level. If there’s a hold up with the trucks, there’s a spot to store chips in the mill yard. It takes about an hour to produce enough chips to fill a truck; the system will fill between 14 to 18 trucks a day.