Features Pellets
From cardboard to pellets: pilot project in Inuvik looks to use waste cardboard for heating

A pilot research project that began in Inuvik, N.W.T., four… 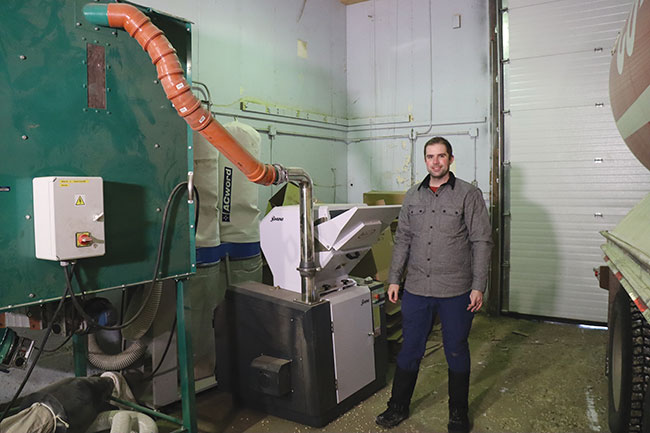 A pilot research project that began in Inuvik, N.W.T., four years ago is simultaneously addressing two local matters of concern. The first explores a way to reduce the amount of landfill-bound waste cardboard, estimated at 100 tonnes each year. The second – related to the first – looks at taking that cardboard and converting it into a source of fuel for heating.

Under the supervision of Patrick Gall, manager of technology development at Inuvik’s Aurora Research Institute, the production of cardboard pellets as a supplemental fuel source with wood pellets is showing promise in a growing heating market.

He says the concept was born during discussions about ways to mitigate the amount of landfill waste in Inuvik. Inuvik’s remote location makes it impractical to truck waste cardboard to a recycling centre. The nearest such facilities are located in the Yukon Territory’s Dawson City and Whitehorse, both of which require more than 10 hours of trucking time, as well as the exorbitant costs associated with getting it there.

“A few people were keen on this idea of using cardboard for fuel, and that eventually evolved into the idea of pelletizing cardboard with the intent of using it with the existing pellet infrastructure in Inuvik,” Gall says.

With funding from the Northwest Territories government, ECO Canada and the territories’ waste reduction and recovery program, a feasibility study was initiated to prepare for the research project’s launch. The plan was to perform a sample cardboard collection, develop a literature review of pellet technology and cardboard chemistry, and conduct an environmental analysis.

It was determined only corrugated cardboard material – what Gall defines as “classic” cardboard used in shipping containers – would be used in the research project. Obtained from grocery stores, hospitals and other large institutions, the carboard is stripped of staples, plastic brackets, labels and any other unwanted material and then weighed. The mass of polymers and non-fibrous materials in the cardboard is also weighed to get a better idea of how much of it is in the cardboard waste stream.

Wood vs. cardboard pellets
During initial discussions about waste diversion, the focus was originally on plastics before it turned to cardboard, Gall says.

The research team contacted mill manufacturers to see if cardboard pellets could be produced in a conventional pellet plant.

“We knew the process was certainly feasible on the manufacturing side,” Gall explains. “The combustion side was a bit more challenging.”

There were concerns about the amount of resultant ash, and cardboard pellets produced today are still being lab tested in order to “check some of the boxes.” Gall says the information he’s gathered is “scattered,” but the research team has been able to make the most of it. The team now has a better understanding of the project’s technical, economic and environmental considerations.

From a manufacturing perspective, the biggest difference between wood and cardboard pellets is that cardboard had originally gone through a pulping process to make the transition from wood to cardboard fibre. The process strips much of the lignin content – which is what predominantly binds wood pellets – from the wood. Cardboard pellets require cellulose fibre for bonding.

The production of wood pellets from waste wood involves a higher-density feedstock than that in cardboard pellet manufacturing. Shredded cardboard, on the other hand, is “super fluffy,” he says, adding that, in a dry climate, it creates concerns that it may not be sufficiently compressed. 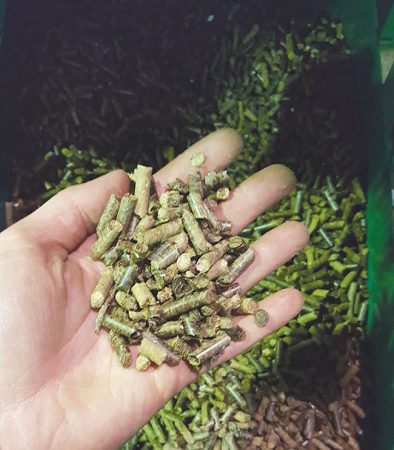 Test results
But, the process involved in cardboard pellet manufacturing is similar to that of making wood pellets. Once the source cardboard is stripped of any staples, plastics and other unwanted materials, it is shredded in a granulator, producing pieces of cardboard two to three millimetres in size.

The shredded bits of cardboard are fed into a pellet mill, where they are subjected to considerable heat and pressure. The temperature inside the pelleting chamber can reach 150 C, while the pressure under the roller can be in the thousands of pounds per square inch.

Gall says there is no heater in the pellet mill, but the pressure applied to the feedstock creates enough internal friction to generate a rapid temperature increase.

The mill being used for the research project – the Inuvik Pellet Mill – is tailored for a medium-sized farm, he says. The work space is about 40 feet long by 10 feet wide, and is able to accommodate a shredder, storage silo and the mill itself. The mill is Lawson Mills Ltd.’s BN-10 model (also associated with the silo) while the boilers are a mix, with most being MES – redistributed Okofen units. The set-up can produce between 200 and 250 pounds of pellets an hour.

“It’s perfect for our experimentation now, and the size of the waste diversion cardboard stream that we have here is not bad at all,” Gall says.

Combustion data suggested five per cent cardboard pellets blended with wood pellets would produce the most desirable results in terms of heat generation and ash content.

For cardboard to fully burn, it requires a little more air than wood pellets. Most pellet boilers have a forced air system, but its settings were adjusted accordingly to ensure the mix burned the most efficiently.

Gall says the data predicted a higher ash percentage with the inclusion of cardboard pellets. Using that value, it was determined 10 per cent by weight mass of ash was expected from the cardboard pellets, while the mass from wood pellets was between one and three per cent. A limit of no more than five per cent ash by mass was recommended for the boilers used for the project.

“We came up with the idea of blending cardboard pellets with wood pellets to amplify the value a little bit, but we never expect to exceed five per cent by mass of ash content,” Gall says, adding that the researchers spoke with mill operators tasked with regular maintenance, who concurred that a five per cent cardboard pellet content was best.

When compressed and burned in a pelletized form, cardboard’s performance increases.

But, controlling the ash content in the boilers was a major concern, he says.

It was also determined that cardboard pellets have 15 per cent less heating value than their wood counterparts. This information was used to come up with an equivalent street value to that of wood pellets, enabling the research team to see if their manufacturing costs exceeded or fell beneath that price. They found they could at least break even or have the chance to become profitable if a subsidy system or municipal waste diversion system could be introduced.

Potential impact
The cost of gathering waste cardboard can be significant, but Gall suggests many community businesses and organizations are eager to drop off their unwanted material directly at the mill to avoid paying landfill tipping fees.

Much of the cardboard taken to the landfill is either dirty or damaged and can’t be used for pellet production, but Gall figures diverting about 60 per cent of it will enable upwards of 60 tonnes of useable feedstock annually.

The Aurora Research Institute has partnered in the project with Delta Enterprises, a private Gwich’in-owned local company that provided access to one of its workshops to install the pellet mill. Delta is poised to eventually take over the infrastructure’s commercial operation.

“We’re working on training them and teaching them how to use the mill while getting our research questions answered,” Gall says.

To cover the costs of the research project, a $95,000 grant was provided by Northern REACHE (Responsible Energy Approach for Community Health and Electricity), offered by Crown-Indigenous Relations and Northern Affairs Canada. Fixed costs included $75,000 in equipment needed to sustain a 250 pounds-per-hour processing rate. In addition to covering the costs of the shredder, silo and mill, the grant also provided for the costs of electricity and service upgrades.

Among the anticipated benefits of the project include the creation of local jobs, the conservation of landfill space and a reduction of methane gas emissions from unevenly decomposing cardboard waste. •