In a bit of Orwellian logic, the EPA’s recently finalized Affordable Clean Energy (ACE) rules (see excerpt from the rule making below) ignore the basis for why using biomass for power and heat is the principal pathway for decarbonization in most other developed countries. By only counting the CO2 emissions at the source and ignoring the continuous absorption of CO2 by sustainably managed forests, the EPA has excluded a proper consideration of the dynamics that keep the net CO2 added into the atmosphere neutral or even negative.

In Europe, wood pellets and wood chips are recognized as low carbon fuels because a full life-cycle analysis shows that under well-crafted (and necessary) sustainability criteria, the combustion of those fuels is carbon neutral. The supply chain carbon footprint accounting, given that fossil fuels are used in transportation and in the electricity used to upgrade the biomass into pellets, typically yields an 85% or more reduction in net CO2 added to the atmosphere. Because of the carbon benefits, biomass derived fuel makes up about 60 per cent of the total renewable energy in the EU28. 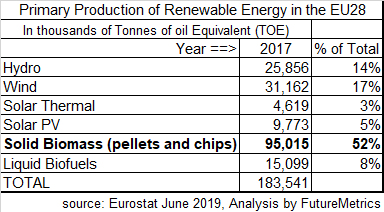 The EPA’s ACE determinations are inaccurate in stating that “accounting for activities not applied at and largely not under the control of the source” is a reason to ignore carbon sequestration under well-managed forest sustainability protocols.

In fact, UK and EU utilities that are substituting pellets for coal account for “activities” that are across the Atlantic ocean from their emissions sources! The nearly nine million tonnes of pellets that will be exported from North America this year for use in power plants are all subject to rigorous requirements to prove that the carbon stock in the landscape that is the source of pellet production feedstock is not being depleted.

The EPA is ignoring well-established protocols that supported about $1.0 billion in pellet exports from the US in 2018. Almost all those exports were certified by independent third-party entities as sustainably sourced and thus able to qualify as low-carbon fuel for power stations.

It is only with blinders on and with half-baked logic that the EPA is able to ignore the net carbon intensity of coal generation, the consequences of rapidly increasing atmospheric CO2 concentrations, and the benefits of substituting wood pellets produced from renewing forests for coal. 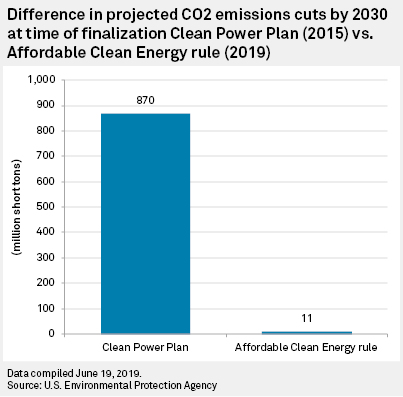 FutureMetrics published two white papers (in 2015 and 2017) targeted at the republican congress and at the newly elected president Trump explaining why it makes good economic sense to consider co-firing wood pellets in utility power stations. While those papers failed to influence the policy making exercise that appears to have started with a predetermined conclusion that ignores climate change, they are still relevant and have information on job creation and other economics benefits that policymakers should pay attention to.

The two papers are as follows can be found here and here.

Excerpt of the ACE rules – thanks to Biomass Magazine for the text.

“Upon consideration of comments and in accordance with the plain language of CAA section 111, the EPA is now clarifying that biomass does not qualify as a system of emission reduction that can be incorporated as part of, or in its entirely, as BSER [Best System of Emissions Reduction]… BSER determination must include systems of emission reduction that are achievable at the source. While firing of biomass occurs at a designated facility, biomass firing in and of itself does not reduce emissions of CO2 emitted from that source. Specifically, when measuring stack emissions, combustion of biomass emits more mass of emissions per Btu than that from combustion of fossil fuels, thereby increasing CO2 emissions at the source. Recognition of any potential CO2 emissions reductions associated with biomass utilization at a designated facility relies on accounting for activities not applied at and largely not under the control of that source, including consideration of offsite terrestrial carbon effects during biomass fuel growth, which are not a measure of emissions performance at the level of the individual designated facility. Use of biomass in affected units therefore not consistent with the plain meaning of ‘standard of performance’ and cannot be considered as part of the BSER.”

William Strauss is the President and founder of FutureMetrics, LLC.