Caith and Campbell Cameron, co-founders of the start-up Wintergreen Pellets in Didsbury, Alta., have been exploring the viability of turning straw into pellets that can be used to replace or supplement coal and wood pellets 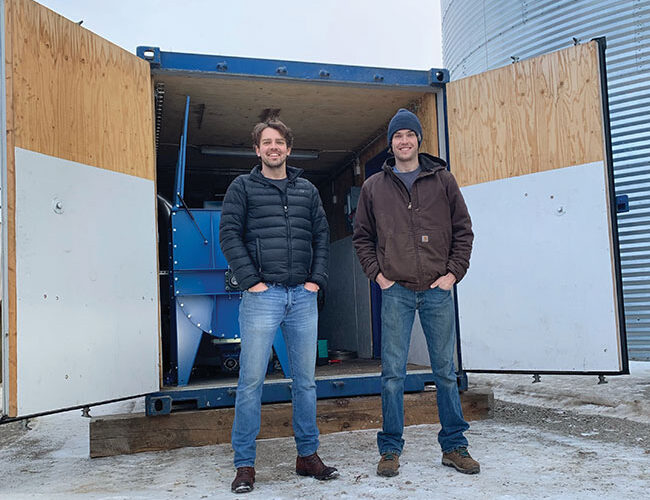 As the effects of climate change become more and more evident, there’s a growing sense of urgency that new, alternative fuels need to be developed on a larger scale. Many companies are focusing on scaling up renewable natural gas, wind and solar, but few are aware of the opportunities that agricultural biomass presents.

However, Caith and Campbell Cameron, co-founders of the start-up Wintergreen Pellets in Didsbury, Alta., know just how much potential there is with agricultural biomass. In early 2020, they began working with the University of British Columbia (UBC)’s Biomass and Bioenergy Research Group (BBRG) to explore the viability of turning straw into pellets that can be used to replace or supplement coal and wood pellets.

Showcasing straw pellets
Caith, a farmer and a geologist, has a first-hand understanding of how much straw is underutilized on farms. Although straw is sowed back into the soil and is often used for animal bedding and feeding, there still remains excess straw that is underutilized, he says. Campbell, a mechanical engineer, joined Caith in early 2020 to “make this project a bit of a reality and see what we could find out,” he says.

“Campbell and I, we wanted to be part of the change from fossil fuels,” Caith explains when asked why they started Wintergreen Pellets. “We’ve both worked in the oil patch and we want to see it change from fossil fuels to a greener future. On top of that, we see a big advantage with mirroring the wood pellet industry in the fact that the straw pellets can be sustainable and renewable. We grow the crop every year, whereas with wood pellets, it takes 30 to 70 years for those trees to be mature enough.”

In June 2020, Caith and Campbell connected with the BBRG, which has been working on a project looking at the production, logistics and commercialization of pellets from under-utilized sources, such as straw. The $2.4-million, four-year project is in partnership with the Wood Pellet Association of Canada and BioFuelNet, and funded by the Canadian Agricultural Partnership.

The BBRG were looking for an Alberta farmer to use a pellet mill they had procured to “showcase it to other farmers and advertise the fact that there is potential for straw pelletization in the Canadian agriculture industry that can provide additional value to their crops,” Campbell explains. “It lines up perfectly with what we’re doing. We needed a pellet mill to essentially act as our pilot project.”

Since then, Wintergreen Pellets and the BBRG have been working closely together, researching potential markets for straw pellets and the best way to move forward.

Wintergreen Pellets’ main goal is to collect leftover straw from farms, in addition to their own, to produce straw pellets that other farmers in Alberta can use as an alternative source of heat and power.

There is also the option of producing straw pellets for the chemical industry. This is because “the pellets can absorb up to three times their mass,” Caith explains. “We’re even doing some experiments on the farm here with our spraying and our chemicals. When you have to clean up the sprayer, you need a safe area to do that, so we’re looking at building a bio-bed area with the straw pellets that will be able to absorb and clean those chemicals from the sprayers.”

Facilitating research
Although supply chain problems caused by COVID-19 have delayed the delivery of the pellet mill to Wintergreen Pellets, the pellet mill arrived safely to their farm in mid-January. They are optimistic that they will be able to get it operational and begin the research and development phase of their operations soon.

The pellet mill is a Sweden Power Chippers PP150, rated to do 175 kilograms of straw per hour, housed within a 20-foot shipping container.

“It’s meant to be a plug-and-play type operation, fully enclosed within the sea can container,” Campbell explains.

They plan to use the mill for a year, during which time they will determine if it’s viable business for them.

“At that point, we’re going to decide whether we need to go out and buy our own or maybe purchase this one from UBC, and go from there,” Campbell says.

Once the pellet mill is operational, they will begin testing batches of straw, around one to two tonnes at a time. These batches will be tested in different coal and biomass power plants in Alberta that are interested in potentially using straw pellets in the future, Campbell explains. Those power plants will provide feedback on how the straw pellets performed, which will help  Wintergreen Pellets’ steer their future operations.

They will also produce batches for the BBRG as requested, using different types of straw, such as wheat, barley and pea straw. Those batches will be sent back to UBC so they can test the pellets for their own research purposes.

“We’re there to facilitate and help them in that research,” Caith explains. “It would be a day-to-day, project-by-project basis, and whatever they want, we’ll pump it out.”

“We’ve never made pellets before ourselves, so we’re excited to learn,” Caith adds. “I think there will be quite a learning curve. I don’t think it’s as easy as it looks, that you just put straw in and out comes a pellet. So, we’re definitely going to take this winter to try to tune it and hone in on the skills.”

Scaling-up potential
According to Campbell, the BBRG’s original goal with this project was to use the pellet mill as a showcase project to demonstrate to farmers that they can have their own pellet mills and produce pellets on their farms.

“But, there’s a lot that goes into understanding the different additives, the different pressures and mechanical aspects that go into producing pellets that maybe would be too difficult for each individual farmer to do,” he says. “So, maybe the ideal logistical model would be to have one large pellet producing facility and you gather the straw from the other farmers in the area.”

If the results of the research and development phase prove that producing straw pellets is a viable business model for Wintergreen Pellets, then they will look at scaling up their operations in a larger facility in Didsbury, Caith says. This larger facility would be capable of producing 50,000 to 60,000 tonnes of straw pellets annually.

“That would become a model that shows other farms there is a market for it, and either that spurs on other facilities to produce it themselves or we look at securing more straw feedstock from local farms throughout Alberta to be a main pellet producer for the straw market,” he says.

However, both Caith and Campbell are aware of the potential challenges that come with producing straw pellets, especially considering that growing straw is reliant on the weather, which is changing drastically thanks to climate change.

“This last year in the agriculture community, we saw a devastating drought throughout Saskatchewan and eastern Alberta that proved that there was no straw available,” Caith says. “So, we’re looking at being flexible in the fact that there could be years like that again.”

One way they might overcome these challenges is by producing wood pellets (in addition to straw pellets) using recycled wood from construction operations in Calgary, he says.

“Another challenge is communicating to farmers that we understand, as a farmer myself, how important straw is for the soil. We’re not trying to take everybody’s straw; we’re only looking at trying to utilize excess straw.”

Building up biomass
Caith and Campbell agree that communicating and educating farmers about the potential benefits and uses of agricultural biomass will also be key for moving the industry forward.

Although Canada has the potential to be a mass producer of both wood and biomass pellets, the majority of wood pellets produced in Canada are exported to Asia and Europe, something Caith would like to see change in the future through more government support.

“I know they struggle up north finding heat sources. I think government subsidies would really open the door to finding alternatives like straw pellets,” he says.