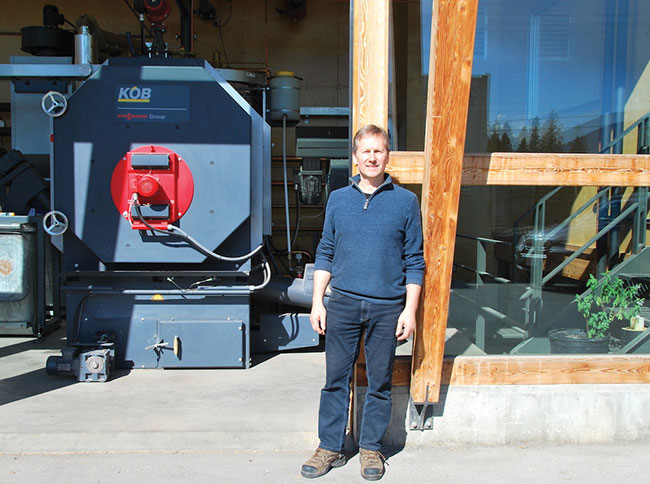 According to the International District Energy Association, there are at least six biomass-fuelled district energy systems operating across Canada as of May 2019. That number is likely higher with a handful of small First Nations communities in B.C., Yukon and the N.W.T. installing these systems over the past few years.

All are owned and operated not for profit either by universities, municipal governments or residential developers to economically heat their own buildings – save one.

Fink Enderby District Energy is successfully running as a private for-profit mini-utility for a handful of nearby customers in Enderby, B.C.

Canadian Biomass first toured the Fink Enderby District Energy installation when it opened in 2012 as the first privately funded biomass district energy system in western Canada. The project was hailed as a benchmark for speed and affordability compared to the typical cumbersome process to approve, design and install a biomass-fuelled system. Operating as a private utility under 1 MW registered by the British Columbia Utilities Commission, Fink Enderby originally served eight commercial, municipal and residential customers.

Seven years later, we wanted to check in with project owners and managers to see how the system has held up, and share their lessons learned about biomass district heating in Canada.

Fink Enderby District Energy is owned by and sits on the property of Fink Machine, a bioenergy equipment supplier in Enderby, B.C. Owner Burkhard Fink says, regardless of the financial success of the district energy system to date, it’s the education that has had the most impact.

“The biggest obstacle to bringing district energy to Canada is doubt about the reliability. Often the fear is that these systems are not reliable, therefore they price them out of this world with expensive manufacturers. It’s not necessary. We just needed them to learn from existing systems,” Fink says. Fink Enderby was built for that very reason.

Walking to the Fink Enderby site, I’m struck by how inviting it looks. An engineered timber structure custom-designed by Fink houses the entire Fink Enderby system. Support beams holding up the roof over the open-air infeed room are cross-laminated timber panels from Penticton, B.C.’s Structurlam. Floor-to-ceiling glass windows in the main boiler room allow sunlight to stream in, and those outside to easily see in.

And the inside doesn’t disappoint. Much of the original infrastructure is still in place, including the Viessmann Vitoflex 300-RF (Pyrot) wood-fired boiler, walking floor, augur, backup gas boiler, and the piping. 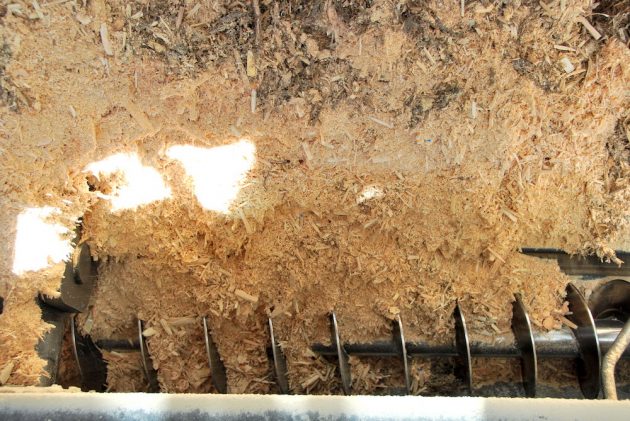 Wood chips are stored in a bunker and automatically fed into the boiler using a walking floor and augurs, all of which were built in-house by Fink Machine.

Today the utility serves 11 customers, the most recent of which is the new Splatsin community centre.

“The timing worked out well because we were involved in the design stage so we could put the right things in there to prepare for it. These things are harder after the fact,” Fink says.

The boiler is running continuously through the year, ramping up and down as required. Wood chips from two or three local sawmills fuel the system, delivered up to once a week depending on the time of year and required fuel load. Chips are stored in a bunker that can hold up to 60 tonnes. From the bunker, chips are automatically fed into the boiler using a walking floor and augurs, all of which were built in-house by Fink Machine.

The boiler is a Viessmann Vitoflex 300-RF (formerly called the Pyrot) wood-fired boiler, rated at 540 kW. At maximum output, during the coldest days of the year, the boiler consumes 4.5 tonnes of chips a day. A triple-pass heat exchanger in the boiler converts the heated gases into hot water, which is then piped into an 8,000 litre buffer tank where it becomes a thermal heat sink. From the buffer tank the water flows to a hot water manifold and is then divided into the main lines, which feed client’s pipes. 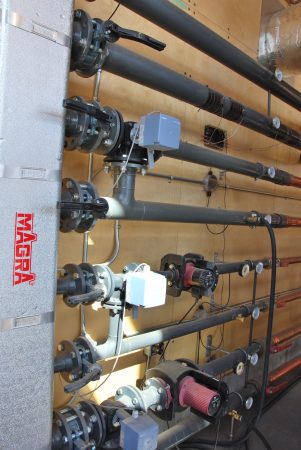 The district energy system pipes out heated water to 11 customers in the vicinity, with new clients expected to come on board shortly.

“It’s a pretty self-sufficient operation. We don’t need someone continuingly manning it. That’s how I wanted it: effortless,” Fink says. As a result, the entire system requires very minimal staff interaction and oversight. Fink measures and monitors each building’s usage remotely via a district energy management program from Schneid, an Austrian company that specializes in HVAC building management systems with a focus on district energy.

Fink expects they could see new clients coming on board shortly, which would require them to upsize the boiler from 540 kW to 720 kW. More clients mean the system’s efficiency goes up.

“If you have a long main line with only two clients, you have heat loss from A to B. If you have more customers on that line the heat loss is divided up between all those customers,” Fink says.

Fink Enderby offers its clients a fixed rate equal to what they are currently paying for their natural gas. Customers are saving by not having any combustion losses. For customers with older heating system that are only 80 or 85 per cent efficient, the result is 15-20 per cent less energy usage, and the resulting dollar savings.

After seven years of maintaining this small private utility model, the company has managed to stay in the black in spite of the fluctuations in gas prices across Canada. “With these low gas prices right now, it’s pretty much at the break-even point. There is not a lot of money in it as is. But, because I’m running it so efficiently without a lot of overhead, it’s successful,” Fink says.

The real incentive for Fink is to showcase that his system makes sense in Canada. “Yes, we’re in the black, but the important thing was education. There are a lot of situations out there where these systems get priced to death in the design stage so they don’t even come off the ground. We proved that you don’t need $5-10 million for a small system like this.”

The list of municipalities, First Nations and education institutions that have since installed wood boilers and district energy systems are the real testament to Fink Enderby’s success.

“We’ve definitely been able to create business through our show system. Around four or five clients have installed district energy,” Fink says.

Not all of Fink Enderby’s lessons learned have been rosy; some have been harder lessons, says David Dubois, Fink Machine’s manager of business development.

“There’s an evolution going on right now. And like most businesses, we have to react to them,” Dubois says. Here’s his definitive list on what to bear in mind if considering a district energy system:

Fibre availability
“Going into this project, we knew what our fibre basket looked like in our area, but that doesn’t mean that we haven’t changed suppliers and encountered challenges,” Dubois says.

While it’s good to have long-term suppliers, it’s not always possible. Major suppliers aren’t typically looking for small 300 to 400-tonne per year contracts, so if they are able to supply feedstock, it may be temporary.

“We just have to make sure we’re aware of the larger market so when things change we are able to react and identify new suppliers,” he says. “That industry awareness is a key piece of what we need to do.”

Utility regulations
“When we first started we really weren’t on the radar of utilities here in B.C. We still aren’t, but they have recognized small-scale energy systems do fall within their mandate. There is this ongoing process and evolution,” Dubois says.

That evolution led to questions around registration, filings and ways to ensure they are staying within regulation parameters. Municipalities are exempt, but because Fink Enderby is privately owned they are under certain constraints.

“It’s a bit of a moving goal post and there have been changes since we started that had the potential to impact us, so it was important we stayed on top of those,” Dubois says.

Emissions testing
There has been some recent movement in Canada around emissions regulations that may impact biomass district energy systems. Emissions are provincial jurisdiction, but there are efforts underway to standardize the marketplace on the national level.

Regulations aside, in the spring of 2018 Fink Enderby made the decision to install a cyclone filter on the boiler flue gas system to bring its emissions down even lower.

“We recognize we’re also part of a community,” Dubois says. “It wasn’t needed or inspired by any comments or concerns, but that’s us being a good, proactive corporate citizen.”

Public facing
Fink Enderby regularly hosts open houses to welcome the community into the facility to learn what they’re all about. The importance of the larger community was a lesson they learned quickly, Dubois says.

“Within the industry we’re known, but not necessarily by the general public. We all have the tendency to fly beneath the radar, but we really need to make sure that we are educating people about what it is we do,” he says.

The open house also helps them maintain a strong relationship with the local government. “We have learned to appreciate that what we’re doing has an impact on our community and having the support of the local government is a key piece. That can be a surprise sometimes for a private enterprise.”

Flexibility
Central to Fink Enderby’s success is their ability, as a private company, to remain flexible to all these challenges and jump on opportunities as they are presented, Dubois says.

“Our decision-making matrix is very compact, very simple, due to our knowledge and experience. We can say, ‘Yes, we can do that,’ and that’s all we need. We’ll do our due diligence, of course, but we don’t need a 45-page report from three different engineering companies. We can do our own calculations to find out what will work,” he says.