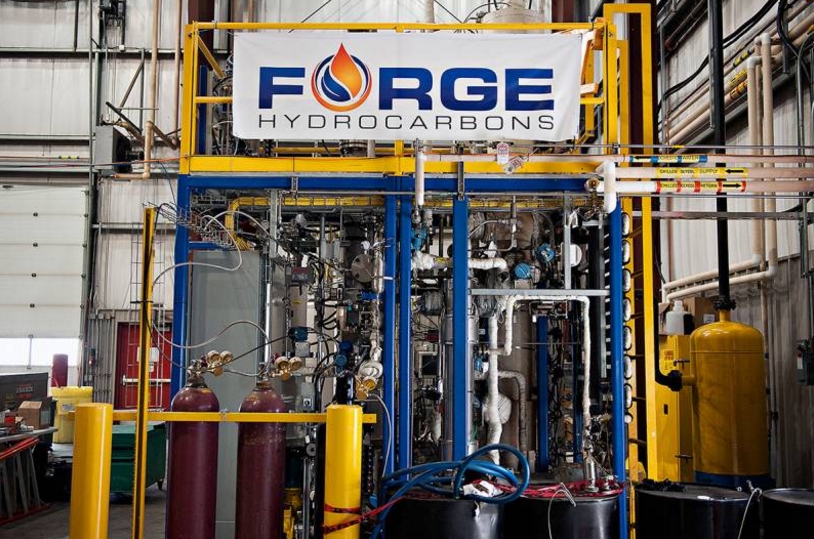 In the last five years, aviation has moved to the forefront of the renewables sector. In fact, renewable jet fuel was the topic of a panel discussion at the SPARK 2019 conference in Edmonton on Oct. 29, called “Sustainability in Action: A Case Study in Collaboration.”

The session, moderated by David Bressler, professor at the University of Alberta and inventor of the technology behind renewable diesel company Forge Hydrocarbons, was livestreamed to audiences globally. Dr. Jorge Aburto, a researcher at the Mexican Petroleum Institute and leader of the biomass conversion division, joined in through video.

On stage, Geoffrey Tauvette, director of environment and fuel at WestJet, Tim Haig, CEO of Forge Hydrocarbons, and Lynn Wyton, director of strategic business connections at Edmonton International Airport (EIA), spoke about their companies’ work and collaborative efforts in the realm of renewable jet fuel, and the challenges and opportunities of commercialization.

Tauvette kicked things off by sharing WestJet’s perspective as an airline on renewable jet fuel, explaining that jet fuel makes up 20-30 per cent of their costs. Consequently, the company is exploring multiple ways to reduce their carbon footprint and associated costs.

The company has improved fuel efficiency by close to 50 per cent since 2000, Tauvette shared, and has added more fuel-efficient aircraft and technology to their fleet.

“But we still have a problem. The airline and the industry keep growing, producing more emissions as we go – how do we deal with that?” he said. “We are challenged with looking at what those opportunities for aviation are.”

Tauvette believes renewable jet fuel or “bio jet” is the best solution for airlines, since electric planes are still far off into the future.

But to make an impact on airlines’ carbon footprint, bio jet needs to be produced on a commercial scale at a reasonable price. This “is going to take all our partners that we can work with,” he said.

Forge Hydrocarbons might just be one of those partners. Haig started the company, initially called Biox, in 2000. Today, the company makes biodiesel using Bressler’s technology, which turns lipids into renewable diesel without a hydrogen catalyst. The jump from renewable diesel to renewable jet fuel is not that big, he said.

“We’re about 90 per cent less carbon than petroleum-based fuel,” he added. “It would make a significant impact on the carbon.”

The company is currently scaling up production, building its first plant in Ontario. As the barriers to renewable jet fuel come down, Haig sees a future where there will be a Forge Hydrocarbon plant at every major airport in Canada, which would help reduce the cost for airlines to use renewable jet fuel.

Such a future would be ideal for Edmonton International Airport, which wants to be the testing ground for new technologies, Wyton said.

“In our mandate as an airport is the expectation that we will be driving economic prosperity and community development – technology is part of that,” he explained. “We’re really excited to be working with other groups as they consider building their technology on campus at EIA.”

In fact, EIA recently established a partnership with Energy Efficiency Alberta and ATCO, which has resulted in the placement of natural gas cogeneration plants at the airport. The plants will reduce their terminal energy use by 20 per cent, Wyton said.

After the initial rundown of each company’s work in the bio jet space, Bressler kicked off the Q&A portion of the session by asking, “What do we need to be successful to move bio jet forward?”

In response, the panelists highlighted the “Four Ps” – price, policy, people and perspective.

“Our biggest challenge is price, and we know there are different ways of addressing that,” Tauvette said.

He believes collaboration and open conversation with partners is key to overcoming this issue. He emphasized that there needs to be a willingness to speak to companies or industries you wouldn’t normally talk to, to develop innovative partnerships.

“I’ve been to forestry meetings,” he shared. “I’m the only airline at a group of people talking about how we can look at forestry waste and use it differently.”

Meanwhile, Haig highlighted the need for policy above all else.

“The renewable fuel space – it doesn’t exist without policy,” he said. “The one thing that made renewable fuels possible is that there was a mandate in North America.”

A policy, such as blending five per cent renewables into jet fuel, would put all the airlines on a level playing field, he added.

Tauvette agreed, noting that while the airline industry’s target of a 50 per cent reduction in greenhouse gasses has helped propel airlines’ work in renewables, domestic policy is still needed.

“We see jurisdictions other than Canada putting in incentives and policy programs that are helping to address some of the unique competitive issues that we have as airlines, and helping those airlines and jurisdictions reduce their carbon intensity,” Tauvette said. “We feel a bit of a threat on the Canadian side as to how we can do this right.

“It’s sad to see a lot of our feedstock be sent out of the country for other places in the world to reconvert it into renewable fuels, and then sent back here to be bought,” he added.

Haig agreed, saying, “We’ll get the prices to the place where it doesn’t adversely affect the price of a flight, but we just have to keep moving, keep working together.”

Despite the challenges, all three panelists emphasized how much progress has been made in renewable jet fuel so far, and the number of opportunities in this space. Five years ago, conversations such as this would not have taken place, Wyton said.

“The fact that WestJet and EIA are actually talking about bringing something like this on, that’s the key to success,” Haig added.

“The technology is there – it really is about setting up a key value chain with the feedstock, we need to get that done,” Tauvette said. “Canada, and Edmonton, has the perfect opportunity to do that, with all the refining here, the universities and knowledge.”