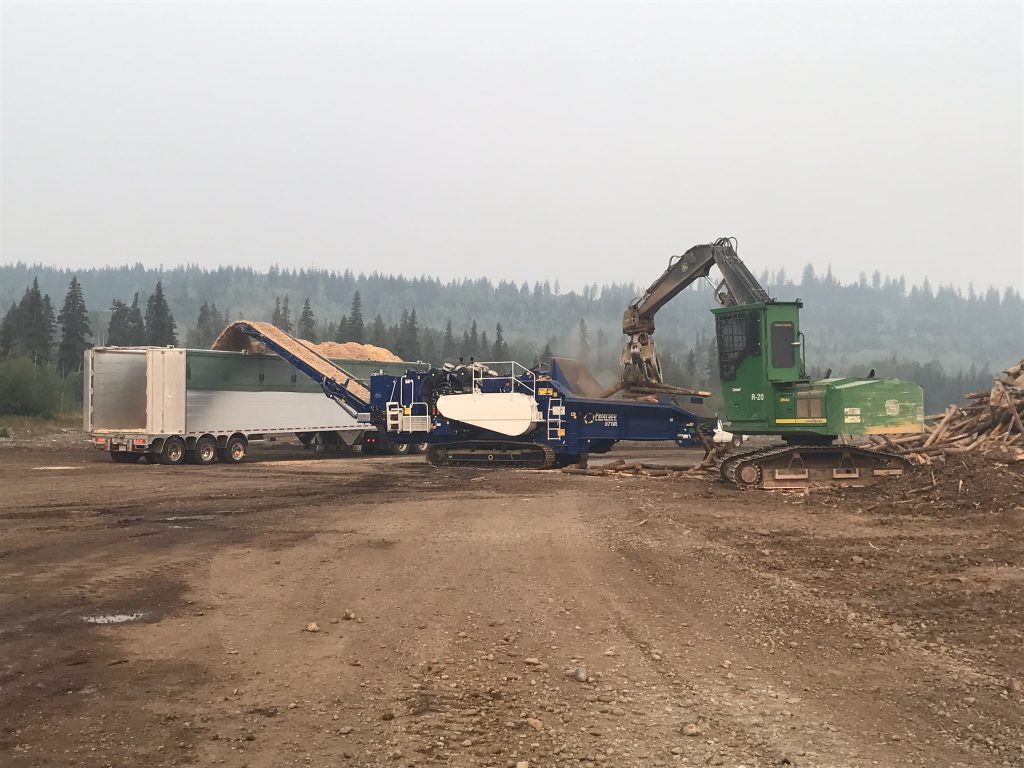 Over the past 13 years, PacBio has saved 1.67 million metric tonnes of wood waste from being burned and instead turned it to wood pellets and renewable clean energy. Photo courtesy PacBio.

According to Oxford’s Languages, the proverbial saying “waste not, want not,” derives from the belief that if you use a commodity or resource carefully and without extravagance you will never be in need. Truer words were never written when it comes to wood pellet producer Pacific Bioenergy Corporation (PacBio).

For decades in British Columbia, unwanted treetops, limbs, low-quality logs and dead trees have been piled up and burned on site after harvesting. The requirement to do this stems from the province’s Wildfire Act and results in large plumes of smoke that can be seen for kilometres every spring and autumn. In some cases, particulates and harmful contaminants from the burning of this slash find their way into the air in communities.

PacBio saw an opportunity to expand its fibre supply and help the environment at the same time. The company began working with sawmills and logging companies and with local contractors in Prince George, B.C., in 2007 to develop and promote the concept of forestry grinding. A couple of contractors stepped up early-on to embrace new technology and processes.

Since then, PacBio has removed 1.67 million metric tonnes of slash that would have gone up in smoke and turned it into renewable and clean energy in the form of 1.3 million metric tonnes of wood pellets. Today, PacBio’s pellets have found markets in Asia and Europe with customers who appreciate B.C.’s environmental credentials and the responsible use of fibre.

“Over the past 13 years we have transported 71,000 wood chip truckloads of slash out of the forest and into to our local plants, creating jobs along every step of the supply chain while improving local air quality,” says John Stirling, president and chief executive officer at PacBio.

Stirling admits there were lots of learnings along the way for both the company and its contractor workforce.

“Instead of wood chip trucks running between sawmills and pulp mills, we were sending the trucks out deep into the forest along gravel logging roads,” says Stirling. “And we all had to learn how to treat the slash as the precious commodity it really is and not waste, which meant new processing methods for treating the slash.”

“It took some perseverance, but it was clear from the start that this new opportunity had long-term potential. The forest sector has an important role to play in advancing B.C.’s green energy movement,” says Keith Brandner, manager of Excel Resources Inc. “Excel Resources is an excellent example of a local company finding new ways to obtain more value from our forests while making a real difference locally and globally.”

Market experts estimate that the pellet sector is forecast to reach about 51 million metric tonnes per year in 2027 – an increase of 40 per cent of the demand seen in 2019. High utilization of our valuable natural resources can help meet this demand. PacBio is answering the call with its commitment to the responsible use of forest fibre and innovative grinding practices that are creating value every step of the way.