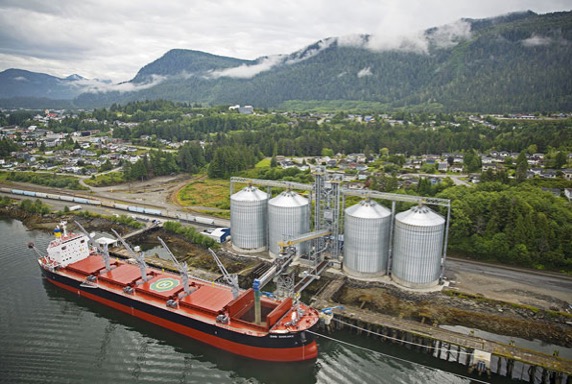 Despite the 4,600 nautical mile sea journey from B.C. to Japan, pellets are still a better renewable and clean energy solution, emitting 91 per cent less GHGs than coal. Photo courtesy WPAC.

Over the next five years, it is estimated that the demand for wood pellets will increase 40 per cent to nearly 51 million metric tonnes per year. The growing demand is driven in large part due to countries around the world seeking ways to meet ambitious climate targets in the face of an ever-warming planet.

In Japan, Prime Minister Yoshihide Suga declared that the nation will aim for net zero greenhouse gas emissions by 2050. This means revising Japan’s policy on coal-fired power plants and establishing a platform for national and regional governments to achieve decarbonization. 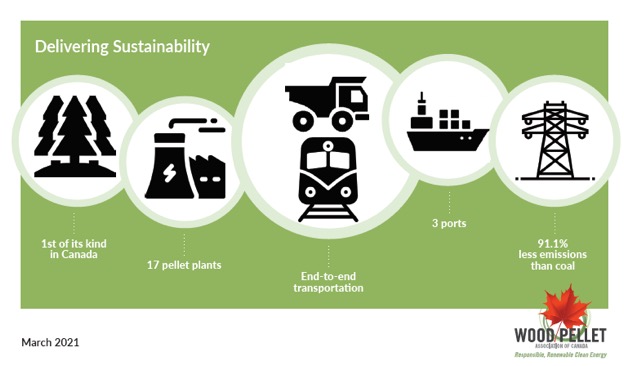 Over the next decade, through its Renewable Energy Directive, the European Union hopes to reduce greenhouse gas (GHG) emissions by 55 per cent and increase its use of renewable energy to 27 per cent. One of the goals of the program as it relates to biomass is to deliver optimal GHGs savings compared to fossil fuels.

But, as we heard recently at the Wood Pellet Association of Canada (WPAC)’s Asian Wood Pellet conference, not all biomass is created equal, and steps are being taken to ensure biomass is delivering on its promise of displacing coal and fossil energy with an immediate and renewable fuel source. This is not unexpected given the growing expectations and requirements that wood pellets not only meet the highest environmental standards but that trees harvested go to their highest and best use and that the entire supply chain including transportation and GHG impacts are factored into decisions.

Japan’s Ministry of Economy, Trade and Industry has formed a sustainability working group to address these concerns and ensure that biomass remains a sustainable fuel option in tackling climate change.

With the second largest land mass in the world and as one of the leading global suppliers of forest products, Canada is well-positioned to offer global customers a responsible green energy product. However, delivering on that commitment requires transparency, including demonstrating the environmental credentials of our energy products with science and data.

For several decades now, Canada has demonstrated a strong commitment to sustainability with some of the most stringent forest regulations in the world; all backed by third-party global forest certification standards. On top of this, WPAC members are committed to using only waste material and low grade by-products from sawmilling and forest harvesting activities.

That’s all fine and good; but the fact is more than 90 per cent of all of Canada’s wood pellets are exported; with the nearest customer, Japan, nearly 4600 nautical miles way. Our customers, as end users, were already tracking and reporting their GHG emissions, but the question became how did Western Canada’s wood pellets compare to coal when it comes to emissions savings?

With contribution of data from WPAC member facilities’ data and with funding from the federal Government of Canada, we set out to answer this important question. We engaged Laborelec to do this work. Laborelec is a global research and solutions organization that supports and accelerates efforts to transition towards a carbon-neutral world, through reduced energy consumption and more environmentally-friendly solutions. Laborelec belongs to Engie, who are amongst the world’s largest power generating companies.

Working with Laborelec’s chief technical officer Yves Ryckmans, we began with collecting credible data from our member wood pellet producers and landing on a single calculation methodology. We used third party audited GHG reports for each of the 17 plants we studied. We also relied on the most widely accepted default values (g C02/MJ) from the European Union’s Joint Research Centre. The following emissions calculation formed the basis of our work:

We then pulled together the data in categories applicable to our supply chain. Below are example calculations from one of the 17 mills used in the study: 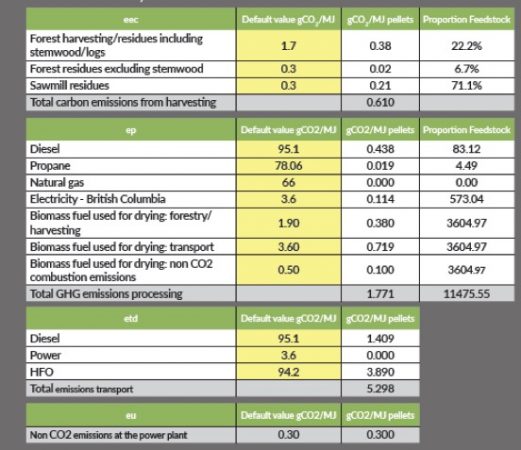 Putting it all together

We collected the supply chain calculations for all 17 mills and produced a combined weighted average for all biomass producers contributing to bulk exports from Western Canada. The results showed that wood pellets fired in Japan produced only 8.37 per cent of the GHG emissions produced by coal (more than a 91 per cent reduction). Wood pellets from the southern U.S. state of Alabama, a much longer sea journey, still only produced 20.08 per cent of the emissions produced by coal (nearly an 80 per cent reduction).

The study confirms what we already know and provides credible data to support the ongoing demand for wood pellets. While both fossil fuels such as coal and biological materials like wood pellets emit carbon dioxide (CO2), it’s ultimately the source of that CO2 which determines the impact it will have on the atmosphere.

Coal is a very efficient fuel, in that it provides more energy per kilogram than biomass, but it is not a renewable one. Coal is mined from carbon sinks that took millions of years to form, so when it is burned to produce energy it increases the total amount of CO2 and other potent GHGs in the atmosphere.

Energy made from woody biomass comes from burning carbon drawn out of the atmosphere by trees within the last 150 years; much of the carbon from those trees is remains locked in long-life forest products, such as lumber or mass timber. Western Canada’s government oversight of forest management activities ensure harvested areas are reforested and newly-planted trees start drawing in CO2 from the atmosphere, most within a year or two of harvesting. Those factors make woody biomass a renewable energy source and an important alternative in the transition away from fossil fuels. 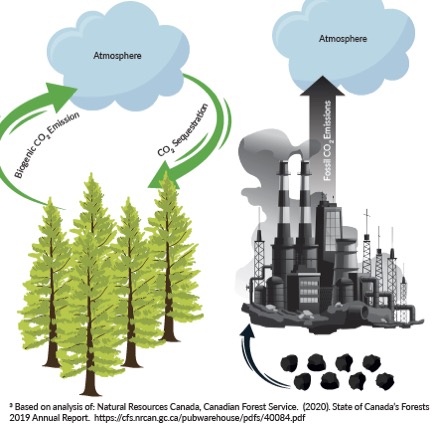 The study confirms that regardless of the length of the journey, when it comes to GHG emissions, bioenergy from wood pellets is the winner hands down. While wind and solar power remain important solutions in our efforts to tackle climate change; wood pellets provide an immediate, reliable and sustainable form of energy on demand that supplements the intermittent wind and solar renewable sources and provides much needed stability to the electrical grid.

WPAC and its members are completing a more detailed technical report on this important study which will be released in the coming months. This data will provide important information for global energy producers, their stakeholders, and regulators who are still developing sustainability criteria for biomass energy generation.

You can watch the presentation on this study by Joseph Aquino, director of sustainability at Pinnacle Renewable Energy, at WPAC’s recent Asian Wood Conference.

Gordon Murray is the executive director of the Wood Pellet Association of Canada (WPAC) and Joseph Aquino is the director of sustainability at Pinnacle Renewable Energy.