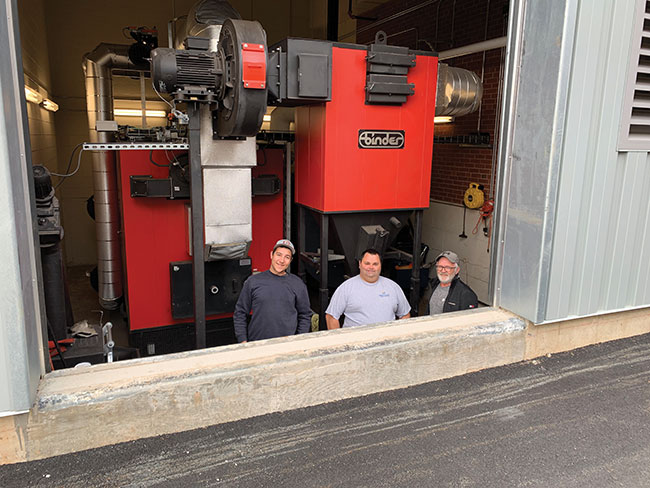 What do you get when you team up one of Canada’s leading pellet manufacturers with an industrial heating specialist? Biomass Solutions Biomasse, or BSB, as it’s known in its home province of New Brunswick.

When the opportunity came in 2018 to provide a carbon-friendly, efficient system to the amalgamated Collège communautaire du Nouveau-Brunswick (CCNB) and the Université de Moncton (UDM) at the CCNB-UDM Shippagan Campus, BSB was a natural solution. The company had experience in this area; in 2014, they installed a Binder 840 kW hot water pellet boiler at the Grand Falls Hospital, which has been heating its facilities with pellets ever since.

Combining the CCNB and UDM buildings required a 36,000-square-foot expansion. The project’s architect, Jacques Boucher Architect (JBA) from Pokemouche, N.B., needed to replace the three old oil steam boilers with a large enough heating system that could meet the requirements of the expanded footprint, be cost-efficient and support the university’s environmental goals. JBA hired Roy Consultant Ltée from Bathurst, N.B., as the engineering firm responsible for studying the steam heating system and advising on renewable fuel sources options, including wood chips and/or wood pellets.

First-of-its-kind
“Storage space was an issue, so the energy density of the wood pellets and the close proximity of the campus to the Groupe Savoie wood pellet plant in Saint Quentin helped seal the deal,” says Théo Losier, development officer with BSB.

While the concept to use pellets was clear, finding the right steam boiler system to heat the campus expansion required more research. Since the team from Roy Consultant had already worked with BSB on the hospital project, they agreed it would be good to bring in Binder’s engineering team from Austria. Binder Energietechnik has a long and successful history in Europe manufacturing biomass boilers and produces cost-efficient and environmentally-friendly boiler combustion systems.

“One of the prime motivators for the project was the Kyoto Protocol at the time and everyone was talking about carbon taxes and taxes on oil of upwards to $20 per tonne,” says Serge Mallet, a fourth-class power engineer who led the installation at the campus and today oversees its day-to-day management.

“Pellets are a renewable and responsible source of energy and were already being produced in New Brunswick for international and domestic customers, so why not use the local pellet supplier?”

Tough enough for Canada
The objective of the project was to replace three outdated oil steam boilers with a new low-pressure steam biomass boiler that would be environmentally friendly, reliable and cost-efficient.

Most wood pellet boilers in North America work with pressurized hot water. The UDM Shippagan’s system is unique in that the Binder boiler was coupled with the campus’ original steam system.

First, the combustion chamber produces a hot gas that goes through a heat exchanger. It is fed with pellets by augers. The combustion process is fully automated and equipped with moving grates, primary and secondary air fans and an exhaust gas recirculation. The system has oxygen regulation and a multi-cyclone that cleans the flue gases.

Second, the boiler has an economizer that preheats the condensate and then generates steam. The steam enters another heat exchanger, which is used to raise the temperature of the hot water that circulates through the campus buildings, heating radiators in each classroom. Both the steam and hot water cycles are closed.

“Our system doesn’t use much fresh water – we recycle almost all of the condensate and use steam instead of hot water so we can use a smaller-size boiler,” Mallet says. “Using our steam boiler for heat and a heat exchanger for heating the water makes the system more efficient.”

The Binder system has also proven itself tough enough to face winters in Shippagan, where temperatures can dip down to -20 to -30 Celsius. While two new back-up oil boilers were installed to replace the old ones, they aren’t getting a lot of use.

The entire system can be controlled remotely through the main control system. All the controls and alarms are linked to Mallet’s and his assistant’s cell phones.

“When I want to reduce the capacity of the boiler, I can do it from my computer at home. Every night before going to bed, I check the boiler on my cell phone and I check the weather. And if the weather will get warmer that night I reduce the boiler capacity before I go to bed,” Mallet explains. “In the morning, I increase the boiler capacity early before all the normal daily systems come on – they are scheduled to start 15 minutes apart so there’s not too much demand on the system at once.”

Coming full circle
Group Savoie’s pellet plant produces 90,000 metric tonnes of pellets every year – comprised almost entirely from the residuals from harvesting or sawmilling. A local trucking company delivers 30 tonnes of pellets at a time to the campus – a 300 kilometre trip one-way from the pellet plant. Each delivery is measured by a scale before it leaves the plant. When the campus is down to about 25-30 per cent, usually within 20 days, it calls the dispatcher for more pellets.

The pellets are also benefitting the local greenhouse. After combustion, the ash left from burning the pellets is collected in a massive bin that fills up approximately every 20 days. The product is transported to the greenhouse to be used as fertilizer for gardens, coming full circle to start a new cycle.

Proving the business case
Like with most innovative projects, there was hesitancy about investing nearly $1 million in new technology that was untried in the Canadian marketplace.

“Not everyone was convinced is was the right thing to do, having a wood pellet steam boiler instead of oil, because it’s never been done in North America. So, we had to go through lots of convincing with the engineer, architect and stakeholders,” says Losier. “We focused on saving and reducing emissions, and I believe, at the end of the day, the two goals have been achieved – more than expected, actually.”

Placing the combustion chamber next to the heat exchanger was a first not only in North America but for Binder, who managed that part of the design.

“Normally, we have a boiler that is just one big block, with a heat exchanger above the fire. Binder managed that part of the design, but it was a bit tricky to fit it in the room because the building was already
designed with that boiler room,” says Francis Lamarche, BSB’s mechanical engineer.

“This was ground-breaking stuff and first-of-its-kind in North America,” says Losier. “Not only did we have to win people over about the technology but also on the idea of a farm-style silo on the campus next to the modern look of the expansion building. But, in the end, everyone agrees that it blends in well.”

Local residents were also concerned about the potential for emissions from the burning of the pellets, especially since it’s located in the heart of the campus.

“I believe it’s cleaner than burning fuel – we’ve reduced emissions by nearly 85 per cent,” says Mallet. “There is no particulate and once the boiler is hot, you don’t see any smoke.”

And it’s not just the air that’s clear, but also the future for more buildings to adopt this technology. Losier says other New Brunswick public buildings, including schools and hospitals, are considering using pellets for energy.

“Here, we have a carbon-friendly product coming from New Brunswick wood waste, and [we are] turning it into a clean source of energy that is supporting local businesses and jobs while reducing emissions and costs – it is the future of energy. We just have to look to Europe and Asia to see how it’s taken off there. We’ve got a good thing going here.” •

Boiling it down – statistics about the steam wood pellet boiler