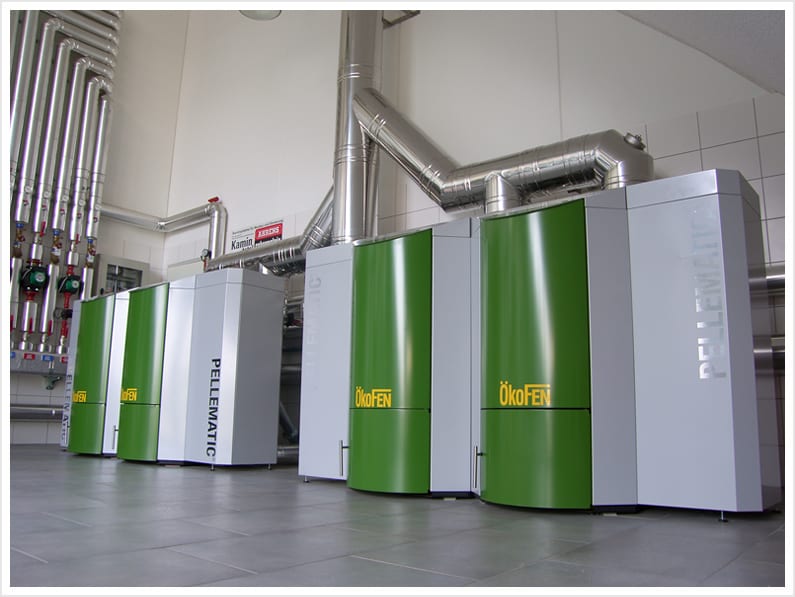 A cascade of boilers that can heat a large building. Photo courtesy Ökofen Pelletsheizung.

Without access to modern, high-efficiency biomass boilers, it will be nearly impossible for our domestic wood pellet heating market to grow in Canada. That is why the Wood Pellet Association of Canada (WPAC) has been working for nearly two years to convince Canadian authorities to reform regulations to allow for the use of the European EN303-5 boiler pressure standards to be used in Canada. EN303-5 is a standard of the European Committee for Standardization (CEN). This standard is recognized by most countries in the world. Canada is a notable exception.

In Canada, boiler pressure standards are regulated by the provinces. Provincial chief boiler inspectors insist that boiler manufacturers adhere to the standards of the American Society of Mechanical Engineers (ASME) and will not recognize CEN. Consequently, the many thousands of safe, modern biomass boilers that are sold each year in Europe and around the world are not allowed here in Canada.

Since our last report, WPAC has continued to work on eliminating this hurdle to the increased domestic consumption of Canadian wood pellets for central heating. WPAC has continued to clarify its pellet industry goals to many, and has sought the perspectives of stakeholders on the regulatory changes being proposed.

Last fall, WPAC submitted recommendations for regulatory modernization to the Treasury Board of Canada.

In September, WPAC’s annual conference provided a remarkable opportunity for expert panelists to provide various constructive views of the wood pellet heating market as it could become in Canada. In the panel presentation, Martin Bentele of the German Wood Pellet Association gave an overview of the burgeoning German pellet heating marketplace; Lindsay Veinotte of Shaw Resources provided insights on using social media to promote pellet heating; Steven Townsend, Provincial Chief Boiler Inspector for Prince Edward Island, showed how his province had successfully integrated European standards into its boiler regulations; and consultant Jamie Stephen made it clear that the use of biomass for heating is likely to be the most productive path for Canadian achievement of its greenhouse gas (GHG) reduction goals. Many government representatives in attendance were appreciative of the breadth of coverage provided related to the boiler certification question. We provided summaries of the panel’s presentations to the European Commission and Canada’s Treasury Board Secretariat.

In October, WPAC participated in a CSA B366.1 meeting to seek relief from a change that applied standards formerly applicable to biomass furnaces of <300kW, or less, to units with output greater than 1 MW. The issue received very little interest from committee members. Hence, very large biomass furnaces that can’t be tested in laboratories can’t currently comply with CSA B366.1. WPAC is continuing to pursue this matter with CSA.

WPAC is currently represented on the Canadian Standards Association technical committees and sub-committees for CSA B51, CSA B415, and CSA B366, all of which have bearing on the regulatory question at hand. 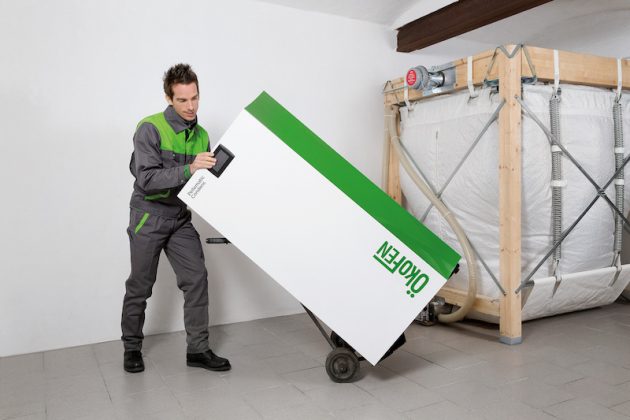 A small, efficient condensing pellet boiler that, due to ASME requirements, cannot be imported into Canada. Photo courtesy Ökofen Pelletsheizung.

In November, WPAC entered conversations with the Standards Council of Canada (SCC) about the boiler certification issue. The SCC-supported Provincial-Territorial Advisory Committee (PTAC) has been working under the auspices of the Canadian Free Trade Agreement (CFTA) on a Reconciliation Agreement for Canadian Registration Numbers (CRN) for Pressure Equipment. In December 2019, PTAC members were introduced to the international regulatory issue WPAC has been pursuing. By late in 2019, PTAC, the European Commission’s Directorate-General for Internal Market, Industry, Entrepreneurship and SMEs, the Austrian Boiler Manufacturers’ Association, and WPAC had agreed to an online conference to present the question and supporting information to PTAC.

Concurrent with this discussion, the WPAC team participated in a teleconference with a Chief Boiler Inspector from the Maritime Provinces. The Inspector favoured biomass combustion for heat but did not favour any alteration of CSA B51. He clearly supported and relied upon the fabrication, to installation, to inspection, to repair, to regulation, to liability structure, provided by the codes built around the ASME standards. He proposed that WPAC pursue a program with ASME of modifying relevant ASME standards to bring EN 303-5 and ASME Section IV standards into closer harmony allowing boilers manufactured to the EU standards to also comply with prevalent North American standards.

WPAC pursued that line of reasoning with EU manufacturers and found no support for the investments that would be required and the highly speculative nature of the Canadian market. Earlier explorations into an engineering review and comparison of ASME Section IV and EN 303-5 were postponed following this conversation in favour of a more careful review of harmonization possibilities given the nearly global acceptance of the two existing standard sets. Interestingly, WPAC was told that boiler vessels built to ASME standards could currently be installed in EU countries. Simple reciprocity could resolve the current issue.

In early 2020, WPAC representatives traveled to Ottawa to join the debrief/question and answer session of the Regulatory Cooperation Forum meeting in which this regulatory issue was discussed. Members of the European Commission and the Canadian Treasury Board Secretariat reviewed discussions they had held about the boiler vessel regulatory issue. All officials present supported favourable reconciliation of the issue, but given the decentralized nature of such regulation in Canada also looked forward to PTAC/EC/WPAC discussions.

In February, PTAC hosted a 90-minute online forum in which WPAC, DG GROW, and the Austrian Boiler Manufacturers’ Association provided information about the current barrier to trade in small-scale pellet boilers and provided information in support of cooperation to remove the barrier. All presentations were professionally delivered; slide decks are available.

In early March, PTAC has a forum scheduled in which Townsend will discuss his province’s successful adoption of regulation permitting the proper installation of CEN certified biomass boilers. More than 20 such boilers are currently operating in the province. He has also offered to conduct the presentations for interested parties outside PTAC.

WPAC’s efforts are reaching deeply into many stakeholder populations; surely other populations will become evident as we continue. We will continue to pursue the cooperation necessary to reach a constructive solution of the certification problem that currently stands as a bump in the road to more domestic pellet central heating at home.