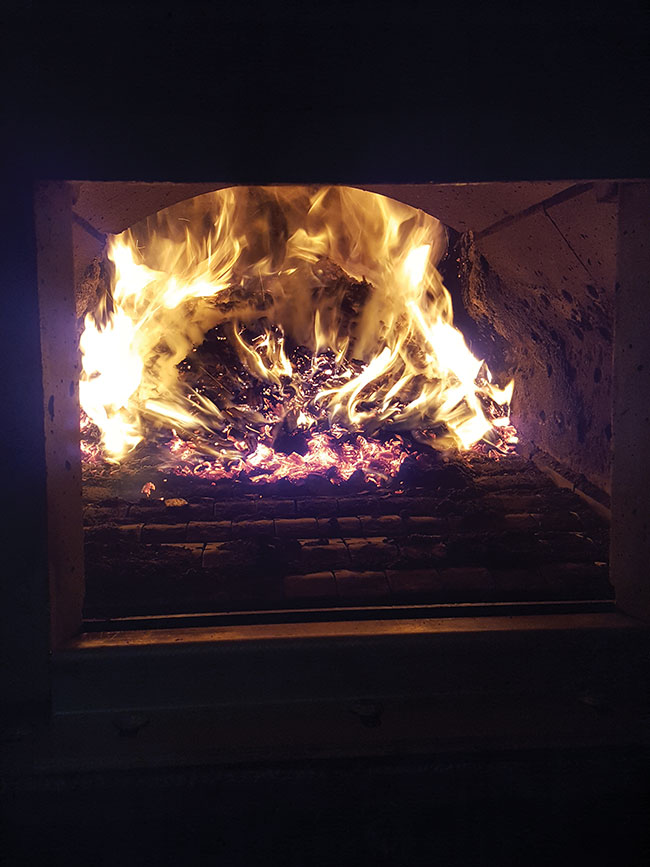 The limited availability of efficient, user-friendly biomass boilers and furnaces in Canada is a significant impediment to increasing the domestic use of wood pellets. Photo by Alex Pratt.

In September 2018, the Wood Pellet Association of Canada (WPAC) initiated a project with the goal of increasing domestic use of Canadian wood pellets in central heating plants. As conversations were held and research was done, a number of impediments to achieve that goal became clear. Chief among the reasons for the slow adoption of pellet-fired central heating practices? The very limited availability of efficient, user-friendly boilers and furnaces in Canada to serve small to mid-size buildings – the buildings most likely to find pellet central heating advantageous.

There is no domestic manufacturer of these appliances, as there is no significant Canadian market. A few boiler models from a couple of Europe’s largest manufacturers are available in Canada. However, there are many sophisticated small- to mid-sized pellet-fired boilers and furnaces with various price points heating other parts of the world. Most of these appliances are manufactured in the EU. Importing and distributing this equipment in Canada is difficult and expensive, and the potential early market is small.

The manufacturing provision found in CSA B51 section 4.10.1.2 is the biggest single deterrent to importing and distributing this equipment. It stipulates, “Manufacturers in countries other than Canada that manufacture and export boilers and pressure vessels to Canada shall ensure that all boilers and pressure vessels are stamped with the appropriate ASME Code product certification mark and registered with the National Board.” CSA B51 is integral to the boiler regulations of all of Canada’s provinces and territories.

The vessels in many EU manufactured pellet-fired boilers are manufactured to the international standards of the European Union – P.E.D. standards (EN 303-5, EN 12953) – not the ASME standards most common to the U.S. and Canada. Redesigning and manufacturing pressure vessels to fully different design specifications is too expensive for EU companies that would otherwise enjoy supporting a new marketplace in Canada.

The chief boiler inspector and the ministers of one Canadian province have given this dilemma serious attention. Their story follows.

Boiling it down
In the 1980s, several attempts were made to heat government buildings in Prince Edward Island with wood chip boilers. To avoid the power engineering staffing requirements for such boilers in the province, these boilers were installed open to the air. But within a few years these boilers were shut down over operational and maintenance issues, some due to the corrosion inherent in systems that are open to the air.

In 2012, two companies approached the province wishing to supply heat with EU-built low-pressure biomass heating plants. The applicants promised to operate and maintain these heating plants and to provide heat at prices noticeably lower than heat produced by burning heating oil. They further ensured that the biomass burned would be harvested sustainably. These boilers were installed and operated, but, as before, they were installed open to the air to avoid constraining regulations, including the manufacturing requirement found in CSA B51. 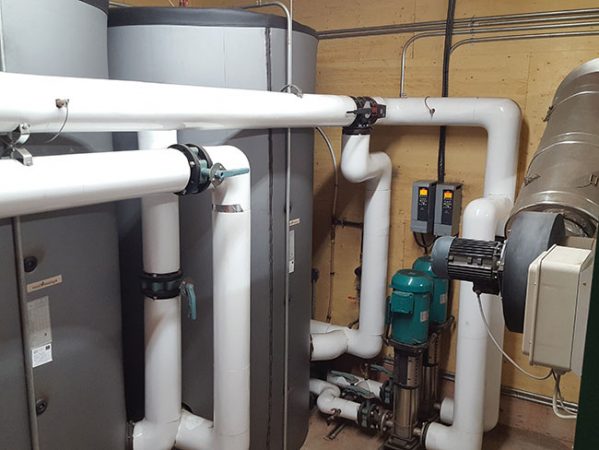 As of September 2019, P.E.I. had 23 biomass heating plants operating in the province with six more scheduled to come on line in 2020. Photo by Alex Pratt.

The chief boiler inspector in the province, Steven Townsend, knew that systems installed open to the air would be subject to problems associated with corrosion, and he knew the rules forced such installation for these boilers. With the permission and support of the provincial government, in April 2012, Townsend undertook an investigation into the construction of low-pressure boilers built to the European Pressure Equipment Directive (P.E.D.) standards.

Townsend visited low-pressure biomass heating plants in Austria that operated with guarded controls at pressures from 60-90 psi. He found the plants to be operated, monitored, and maintained well by factory-trained personnel.

Based on his research and European experience, including first-hand exposure to fabrication, testing, and operation of European low-pressure steel biomass boilers, Townsend determined that pressure vessels fabricated to P.E.D. standards provided an acceptable level of public safety. In his expert opinion, the boilers had a level of safety comparable to that provided by the ASME standards already in place.

Because time for research was limited, Townsend proposed boiler regulation amendments to the province that would permit the installation of welded steel hot water biomass boilers built to P.E.D. standards (EN 303-5 for boilers up to 300kW, EN 12953 for boilers greater than 300 kW output) restricting operating pressures to 30 psi while experience was gained with the systems.

In proposing regulatory changes for the province, Townsend considered four aspects of heating plants using European biomass heating equipment: operations and maintenance of the heating plant, the quality of the European supplied equipment, and the facilities’ safety.

To ensure safety as the province gained a better understanding of these European-manufactured biomass-heating plants, Townsend proposed amendments to the province’s boiler regulations to allow for the installation of European boilers built to P.E.D. standards. These amendments included a training program review, carbon monoxide detection, free standing buildings for larger systems, burn back protection, pressure rise on safety valve activation, and plant dust control. Another amendment for non-ASME manufactured boilers was a reduced maximum operating pressure, currently 30 psi. This is reportedly likely to increase to 60 psi soon. These proposals became law. 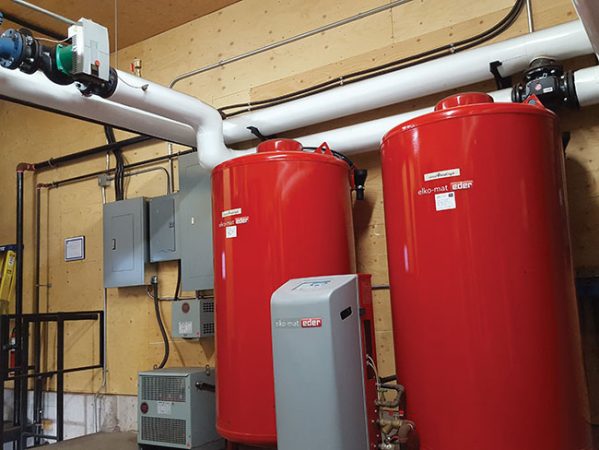 As of September 2019, P.E.I. had 23 biomass heating plants operating in the province with six more scheduled to come on line in 2020. Photo by Alex Pratt.

In 2013, the safety of thermal storage tanks (buffer tanks) fabricated to P.E.D. standards were similarly considered for inclusion in systems with P.E.D. boilers and permitted for installation in systems not exceeding operating pressures of 30 psi.

As of September 2019, P.E.I. had 23 biomass heating plants operating in the province with six more scheduled to come on line in 2020. Three of these plants supply small district heating systems.

Townsend is frequently asked two questions: Is P.E.D. low-pressure biomass equipment safe? And, with the additional installation and operational regulation requirements outlined in the Power Engineering and Boiler Pressure Vessel Regulation, is an equivalent level of safety achieved? His answer to both is an emphatic yes.

More technical details about the non-ASME schedule in the Prince Edward Island Boiler and Pressure Vessel Regulations can be found in a powerpoint presentation Townsend prepared for WPAC’s 2019 conference and AGM, at www.pellet.org/wpac-agm/presentations. It can also be found in the province’s boiler regulations at tinyurl.com/vyv3y2h.

Related
WPAC continues to pursue cooperation on pellet boiler certification
Boiler maintenance best practices
Biofuel boiler puts the ‘green’ in greenhouse
What is central heating with pellets all about?