A look at the technical and operational aspects 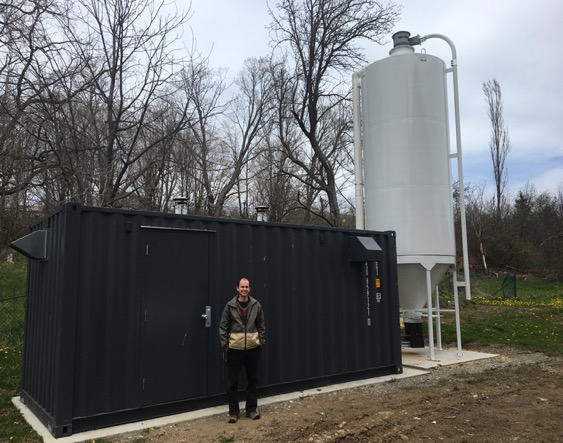 [Editor’s note: this article is the second in a series of four. Find Part 3 online next week.]

Modern biomass energy systems are one of the few clean and renewable options for displacing fossil fuels to meet both heat and power demands in remote communities. Several diesel-dependent communities across Canada’s north have recently adopted biomass heating and combined heat and power (CHP), with the number expected to grow significantly in the near future, if the number of applications to the Clean Energy for Rural and Remote Communities (CERCC) Bioheat Program of Natural Resources Canada (NRCan) is any indication.

In early 2020, CanmetENERGY, part of NRCan, carried out interviews with nine pioneering rural and remote communities that have installed bioenergy systems to gain a better understanding of the challenges faced and what has worked, or not, in terms of technologies, system design, fuel supply and storage and day-to-day operations. An article summarizing the communities and the factors that led to success was published in the Summer 2020 print edition of Canadian Biomass magazine and can be found here. This article is the second of a series of four articles based on the interviews. It details the technical and operational aspects of the bioenergy systems. The two articles that follow will detail experiences and challenges related to biomass fuel supply (Part 3), and training and capacity building (Part 4).

In all nine communities interviewed, heat is the primary output of the bioenergy systems, reducing the demand for imported heating fuels. Biomass boilers heat either individual buildings (three communities) or a district heating loop (six communities) connected to two or more buildings. One community generates both heat and electricity using a series of three small gasification combined heat and power (CHP) units, one of the first applications of small-scale biomass CHP in the country. The heat generated from the CHP heats a district heating (DH) network, while the electricity produced is sold to the local microgrid, owned by BC Hydro. The table below gives a summary of the technical details of the biomass energy systems in the nine communities. 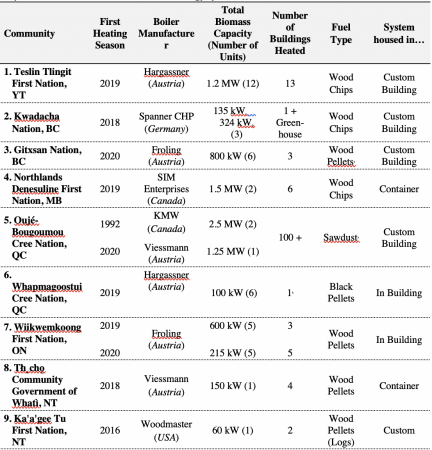 Gitxsan and Ouje-Bougoumou are considering converting to wood chips in the future. Whapmagoustui is planning to power their ice-making machine with a biomass boiler in the near future.

The heat-only biomass boilers installed in eight communities use proven and efficient modern wood heating technology. All but two communities use off-the-shelf European-manufactured boilers. Seven of the nine communities have biomass heating systems that use multiple boilers and respondents noted the added importance of redundancy in remote communities.

The sale of electricity to a provincially-owned utility adds a layer of complexity to the planning process and requires negotiations with the utility who owns the grid, which can be complicated. Hopefully as more systems are developed and community-generated energy becomes more common, this process will become more accepted and more streamlined.

Many communities have constructed a custom building with built-in fuel storage to house the biomass boilers. In other cases, boilers are housed inside the building that is heated or in a shipping container with an adjacent bin or silo (if pellets are used) for fuel storage. Deciding where to house the boiler is based on local circumstances and depends on available space, fuel used and possibly insurance or jurisdictional regulations. Some communities have put a great deal of effort into the design of custom ‘energy centres’ to showcase the heating system and provide an educational resource for local residents and other communities.

While the technology is not overly complicated, engineers and designers who have knowledge about and experience with biomass heating systems are lacking in the north. There is also a tendency to over-complicate the design, adding unnecessary cost. Several communities noted the importance of involving an engineer with biomass experience in the planning and design process. Biomass boilers generally have a high electrical load compared to traditional fossil fuel boilers and it is important that this is considered in the design process, particularly in remote communities with generating systems that are unreliable or have limited capacity. 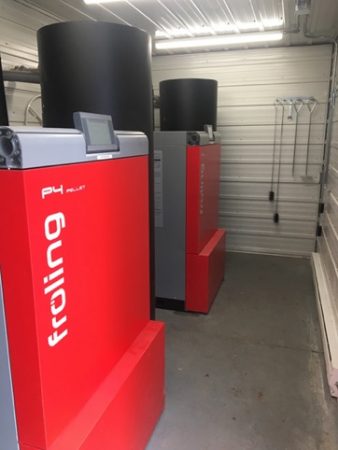 New district heating networks, including those in the communities interviewed, use PEX piping and a mix of water and glycol as the heat transfer medium. It is important to bring in an engineer who is familiar with modern district heating systems (which are more common in Europe than North America) to ensure proper design and engineering of the DH piping system. If metered billing is to be used, the meters also need to be properly designed and installed to be accurate. But, appropriate meters can be difficult to source in Canada. In Ouje-Bougoumou, a certification process has been established for meters and building standards have been developed specific to the requirements of the community-wide DH system.

Most respondents are pleased with the performance of the biomass boilers they have installed and have not experienced significant downtime due to technical problems. Technical issues relating to the biomass boiler technology itself were generally minor and, in most cases, were addressed by the contractor who installed the system. For most communities, operational challenges have had more to do with the fuel quality and feed system than with the boiler itself. The most significant day-to-day operational challenges in all cases are related to wood supply, staffing and the availability of parts and technical support.

The biomass systems in the communities interviewed are operated either by community maintenance or public works staff, or by a community-owned but financially independent corporation (like a utility). For wood pellet boilers, having community staff operate the system seems to work well and involves duties such as emptying ash-bins, occasional maintenance and repairs.

Another issue noted by several respondents is the limited availability of parts for the boilers and chippers, particularly when using European technology. Because parts can take up to six weeks to be shipped from suppliers to the remote communities, most are building an inventory of spare parts, but it is difficult to know early on in the operations which parts are going to be needed. Some communities intentionally selected technology made in North America as parts are more readily available and the technology is more familiar to locals doing repairs. All communities have external supports that they can draw on when local operators are unable to fix an issue. In some cases, these external supports are elsewhere in the province or at least in Canada, while in other cases, experts must be brought in from Europe.

Biomass energy could represent a logical and relatively low-risk first step toward renewable, community-based energy systems for many rural and remote communities; however, its application is relatively new in Canada. Most communities interviewed have only a few seasons of operation at most and are still smoothing out operational wrinkles. Communities may choose to pursue biomass heating projects as opposed to other renewable electricity endeavours due to the relatively straightforward permitting and regulatory process for boilers compared to electricity generating technologies, as well as the opportunity of owning their own infrastructure. Biomass heat-only boilers are well-proven technology with thousands of successful examples worldwide. Community-scale biomass CHP units (using gasification and Organic Rankine Cycle technology) are newer with limited experience but show great promise to play a significant role in the future transition of remote communities away from diesel generation.