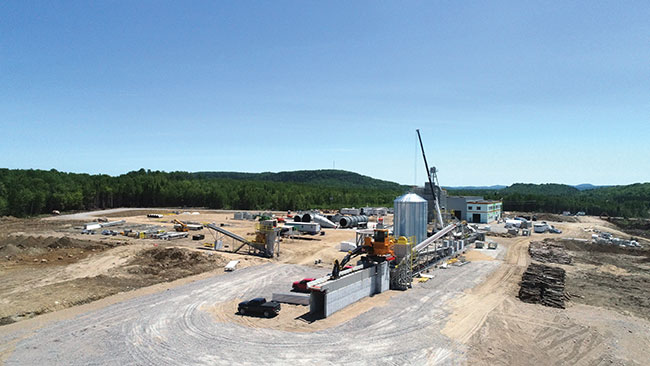 Two-and-a-half hours north of Montreal, up in Saint-Michel-des-Saints, Que., a new wood pellet plant is quietly coming online. The plant, La Granaudière, has been six years in the making, CEO Yves Crits explains.

Saint-Michel-des-Saints is a small village of about 2,500 people, with two main industries: forestry and tourism. In the past, it was home to logging operations, a sawmill and an oriented strand board (OSB) plant. But in 2006, Louisiana-Pacific (LP) shut down the local sawmill and OSB plant due to high wood and transportation costs, as well as a decline in OSB prices at the time.

This was a big blow to the village, which is situated near a public forest with an annual allowable cut of 700,000-800,000 cubic metres, Crits says.

However, in 2014, Crits came to the village to open a sugar shack and was introduced to the mayor, who had worked for Louisiana-Pacific as a logging contractor. They exchanged some ideas about how to bring the forestry industry back to life in the village.

Crits, who has 20 years of experience working in the biomass industry, saw an opportunity. He conducted a feasibility study that proved there was potential for a wood pellet plant in Saint-Michel-des-Saints.

From there, the work began. From 2014 to 2019, Crits worked on the logistics of the plant, securing a long-term offtake agreement with multinational utility Engie for the export of pellets to Europe.

Financing closed at the end of August 2019, and construction of the plant began in September 2019, Crits says.

Fibre supply
But where will the fibre for the wood pellets come from? Most of it will come from the nearby public forest and the auction market, Crits explains.

La Granaudière will be responsible for logging a part of the public forest, contracting the logging operations out to local loggers.

“By the end of winter 2021, we expect to log and to store something like 150,000 cubic metres of wood, because we need to create an inventory for the spring season when it’s difficult to go into the forest with the machines,” Crits explains.

Uniquely, the plant will be able to run with different fibre – both roundwood and hardwood. It could also run with some sawmill residues, but given the difficult market for sawmill residues, Crits does not expect they will be using that kind of material over the next 12 months.

The company is also looking at recovering branches from the forest to reduce CO­2­ emissions and fuel for wildfires, Crits says.

“We are planning to use a percentage of branches – 15-20 per cent. When you calculate the fact that you remove the branches from the forest, you avoid significant emissions of methane and CO­2 by decomposition of these branches,” he explains. “Also, you clear a lot of land for replanting forests.”

By his calculations, although they will only be using a limited percentage of branches, this will remove one million tonnes of CO­2 from the atmosphere.

Pelletizing process
Once production has ramped up, La Granaudière will be able to produce 200,000 tonnes of wood pellets per year.

The process for producing these pellets is fairly similar to the process seen in other pellet plants. Crits turned to both established and local, smaller suppliers for the plant’s equipment.

Logs will go from the logyard to the plant via a Tanguay stationary loader, and will then be debarked by a Kadant debarker.

From there, the logs will go to “what we call the green island – the part of the plant producing the wood chips,” Crits says. This will be built by Quebec City-based S.Huot Inc., which designs and manufactures equipment for wood processing plants. La Granaudière will also use some chippers from Brunnette Machinery and Kadant at this stage of the process.

The green wood chips will then go into two drying lines provided by Player Design Inc. Once dry, the chips will be refined in Andritz hammer mills. They will then go to one of seven Andritz LM26 pellet mills. 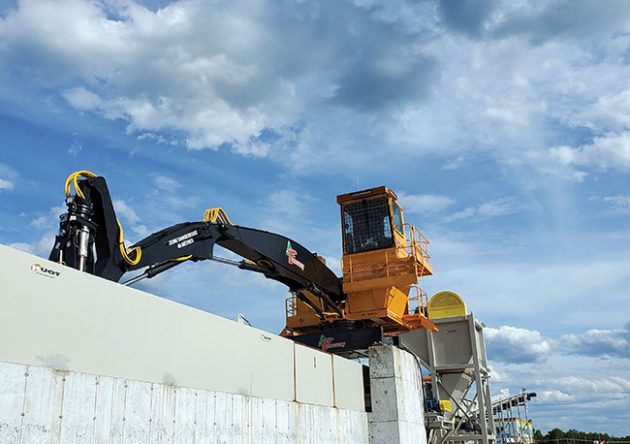 Logs will go from the logyard to the plant via a Tanguay stationary loader. Photo courtesy Tanguay.

Safety first
Throughout the process of designing and constructing the plant, safety has remained top of mind for La Granaudière.

“Our first employee was the health and safety director,” Crits shares. “I think it’s really a signal that everywhere safety is first.”

The company has also completed risk assessments and hazard evaluations in order to install the equipment safely, and has included safety protections from the start, at the engineering phase, he says.

Flamex equipment will be installed throughout the plant, along with some other equipment from smaller suppliers, to monitor dust levels and reduce the risk of explosions.

“We consider safety our main concern,” he explains.

Making a comeback
Once the pellets have gone through the plant, they will go to two silos for storage. These silos only hold 2,000-3,000 tonnes of pellets. But this is by design.

The company has contracted a fleet of trucks that will be running six days a week, 24 hours a day, from local transport companies to transport the pellets to the Port of Quebec. The pellets will be stored at the port and loaded into the ship by Arrimage Quebec (QSL), and then shipped to Europe, Crits explains.

“We try to optimize the use of local contractors,” he says. This is because of the large amount of experience and knowledge of forestry operations in the village, thanks to its history operating a sawmill and OSB plant.

With the addition of La Granaudière, Saint-Michel-des-Saints’ forestry industry is making a comeback. In 2017, the local sawmill re-opened. In conjunction with the new pellet plant, “we are going to recover the same level of production as it was 15 years ago,” Crits says. “We are going to come back to approximately 700,000-800,000 tonnes of raw material treated by the sawmill and by us.

“At the beginning of this process, it was a business deal, but year after year, it’s almost a community project because the main purpose was to bring back some economic activity to revive the village,” he continues.

A few years ago, Saint-Michel-des-Saints was considering closing down its school. But La Granaudière will create 180 new jobs and bring much-needed economic activity.

But, looking ahead, Crits is concerned about the long-term impact of COVID-19.

“The problem is, with the economic incentive given by the government today and people’s fear of COVID-19, are we going to find people to operate the plant? I don’t know,” he says. “Three months ago, we were looking at the Canadian market, Quebec market, and even for people from outside Canada. But now immigration is going to be reduced, so we really don’t know what will happen.

“The challenges are going to continue,” he adds. “We hope that there will be no second wave that stops construction again. It seems that the government of Quebec and the prime minister have mentioned that if there is a second wave, most likely the construction industry will not stop again. The economic impact is too large.”

Only time will tell what the impact of COVID-19 will be. But in the meantime, progress on Quebec’s newest pellet plant continues.